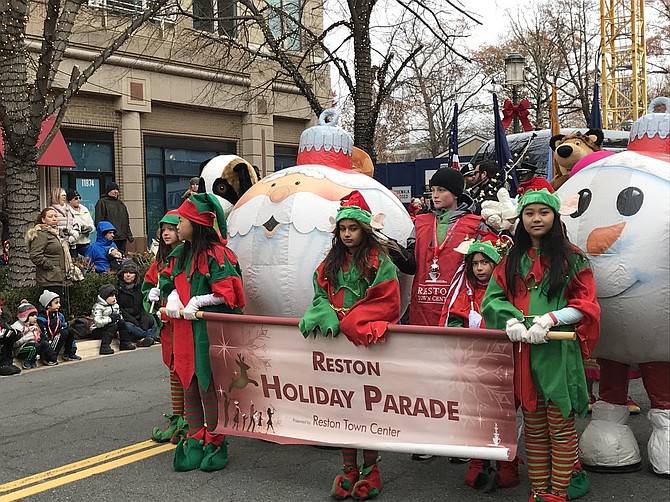 The sight and sounds of the 2018 Reston Holiday Parade kicked off with the official banner and characters. Photo by Mercia Hobson.

Reston Town Center (RTC) may be one of the best places nationally to celebrate the holidays by watching a parade this year. Voted one of USA Today's "10Best" each year since 2016, Reston Holiday Parade is nominated again for the fourth consecutive year. The parade takes place the day after Thanksgiving, Friday, Nov. 29, at 11 a.m. at Reston Town Center, 11900 Market Street.

Holiday parades bring holiday cheer, but only the Reston Holiday Parade features "festive floats, dancing elves, Santa and his sleigh and millions of twinkling lights," said USA Today 10Best 2019. In addition, before the parade begins, volunteers distribute 10,000 commemorative jingle bells to children along the route. This year the annual procession swells to 60 units and more than 1,400 participants marching, singing, dancing and performing along Market Street in the hour-long mega-extravaganza.

With Reston Holiday Parade listed in the category "Best Holiday Parade Nominees," and voting active now, during and after the event, people can cast a ballot once per day until voting ends on Monday, Dec. 2, at noon by visiting www.10best.com/awards/travel/best-holiday-parade-2019/reston-holiday-parade-reston-va/. As of mid-day, Nov. 18, Reston Holiday Parade placed 7th out of the 20 nominees. America's Thanksgiving Parade in Detroit placed first, followed by Tournament of Roses Parade in Pasadena in second place and Chicago's Magnificent Mile Lights Festival in third place.

Reston Town Center announced this year's parade Grand Marshals are "Voices of Service", an inspiring vocal group act of veteran and active-duty military members who rose up through Season 14 of "America's Got Talent" from audition, through Judge Cuts, Quarterfinals, Semifinals, Finals and Finale. They finished the competition in 5th place, as they sang "Some Gave All" with Billy Ray Cyrus. Sgt. Maj. Christal Rheams and Master Sgt. (Ret.) Caleb Green will represent "Voices of Service" and lead the Reston Holiday Parade in chauffeured convertible sports cars.

According to Robert Goudie, Executive Director, Reston Town Center Association (RTCA), it is a Presenting Sponsor of the event, along with Reston Community Center and Boston Properties,

"The holiday parade – which is regularly ranked in the top 5 such parades nationally in the annual USA Today poll – and related day's events are among the most heavily attended and beloved of our Town Center community-building efforts, so the association is proud to be a part of it," said Goudie.

Leila Gordon, Executive Director of Reston Community Center (RCC), shared that the RCC is the Reston Holiday Parade Community Sponsor. "We've been thrilled to be part of it through its history, and we give thanks to the great community we serve." Boston Properties could not be reached for comment.

In the lobby next to the Skate Shop, professional photos available with a donation to benefit South Lakes HS Chorus. Mini-Train Rides on Market Street. All donations benefit Cornerstones.

Santa & Mrs. Claus arriving in a horse-drawn carriage to light the huge Christmas tree, followed by a half-hour of traditional songs led by The Reston Chorale and a brass quintet.

6:30 - 10 p.m.: Horse-Drawn Carriage Rides $5 per person; children 5 and under ride free with an adult. All proceeds benefit Volunteer Fairfax.

Holidays are Here! Festivities continue at Reston Town Center throughout the holiday season:

Holiday Performances at Fountain Square and The Promenade

Mini-Train Rides on Sunday afternoons, Dec. 8, 15, 22, from noon until 4 p.m. Proceeds from carriage and train rides are received directly by local charities on designated dates.

Gingerbread Village at the Hyatt Regency Reston on display from Nov. 29 through Jan. 2.