The festivities will continue at Reston Town Center throughout December. 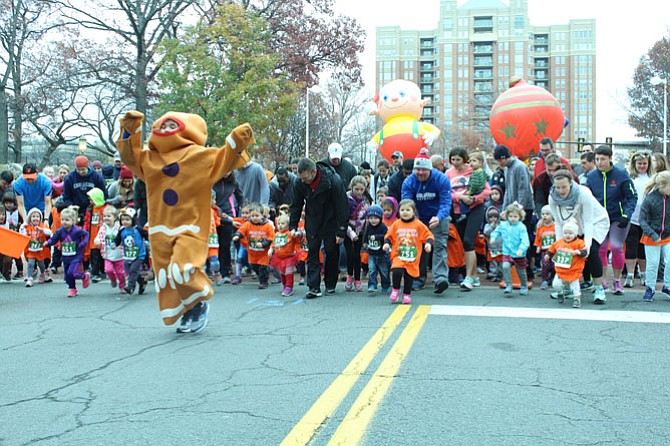 The tot trotters, children aged 3 and under, chase after the gingerbread man as parade balloons are inflated in the background. Photo by Fallon Forbush.

Reston — Santa and Mrs. Claus ushered in the spirit of the holiday season by horse-drawn carriage at the Reston Town Center’s Holiday Parade along Market Street on Friday, Nov. 25.

The festivities have been an annual tradition on the day after Thanksgiving in the community since 1991. Now in its 26th year, the parade has been nominated for USA TODAY’s 10 Best Holiday Parades, which allows readers to cast votes for the 20 nominees once per day until the polls close on Monday, Dec. 5, at noon.

Each year with much fanfare, about 10,000 spectators come to watch the hour-long parade, which boasted 60 groups of about 1,500 participants this year, said Angie Goff of NBC4 News, who emceed at a grandstand at Fountain Square as the groups proceeded down the half-mile parade route. Her NBC4 colleague and meteorologist Chuck Bell also emceed further down Market Street at a second location.

About 10,000 bells were passed out to spectators on the street, which Goff encouraged to be jingled as marching bands, dancers, cars, characters and community groups passed the grandstand.

Not to be missed were balloons that floated down the route. A 35-foot tall snowman balloon was one of the largest. Inflated with 2,500 cubic feet of helium, it took 18 volunteers to maneuver, said Goff.

MARKET STREET was bustling well before the parade kicked off.

While department stores invited consumers to chase down Black Friday deals in the early morning hours, children were after something else. Plenty of shopping could be done at stores throughout the shopping center, but kids were focused on running in the Gingerbread Man Mile. 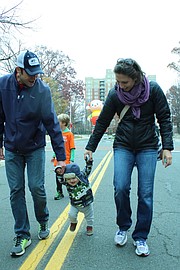 A tot trotter runs with the help of his parents participating in the Reston Town Center’s Holiday Parade along Market Street on Friday, Nov. 25.

Adam Chutuape, 18, a student of Robinson Secondary School in Fairfax, ran as the gingerbread man for all the kids to catch. He was roped into the role by his track team coach, he says.

“It was about five miles in total, but it was fun though,” he says.

With the official arrival of the holiday season also came opportunities to give back to the community.

Right after the parade ended, Santa and Mrs. Claus took photos with families next to the shopping center’s Ice Skating Pavilion. Proceeds from the photos benefited the South Lakes High School Chorus.

Next to the pavilion, people could also purchase mini-train rides on a trackless train that traveled on wheels around the shopping center, which benefited Cornerstones, a local nonprofit.

As the sun set, Reston’s Conservatory Ballet performed a ballet directly in front of the Christmas tree in Fountain Square. For the cold, outdoor performance, the dancers dressed in all white and opted for UGG boots instead of pointe shoes.

In darkness, Santa and Mrs. Claus returned to the square at 6 p.m. to help light the tree. Angie Goff of NBC4 News also returned to the podium with her daughter Adora to count down to the magical moment.

“Every year they take a break from telling the elves what to do and what to make to come out here and say a hello,” said Goff. “Santa and Mrs. Claus, we are so glad that you came to help us light our tree once again.”

Goff then asked the audience to participate.

“We’re going to need everybody’s help though, OK?,” she said. “Everybody, I want you to close your eyes and think of that wish … on the count of three open your eyes, and we’re all going to shout our one-word wish … When you wish, you will see this tree magically light up and that means we’re officially ready for the holidays.”

THE TREE lit up to “oohs and ahhs” and the crowd was guided in a sing along to traditional Christmas carols by the Reston Chorale and brass quintet.

Schedules are posted online at www.restontowncenter.com/holidays.