Order in the Court in Alexandria
Votes

Order in the Court in Alexandria

Public defender Douglas to step down after 32 years. 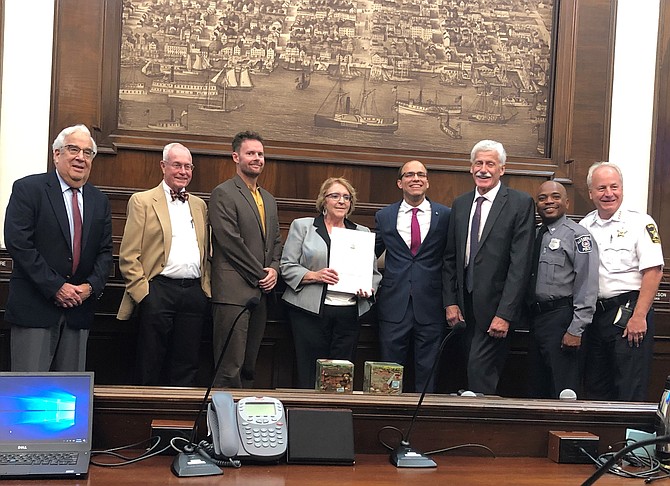 Melinda Douglas, creator of the city’s Office of the Public Defender, was honored Oct. 2 during a ceremony at City Hall following 32 years of service to the community. She announced her retirement earlier this year and will step down at the end of the month.

“I dare anyone to observe her in a courtroom and tell the difference between Melinda and a high-priced private defense attorney,” said retired Alexandria Circuit Court Judge Alfred Swersky, one of several dignitaries on hand for the ceremony. “I’ve had a standing $100 bet on that for decades and not once has anyone taken me up on it, that’s how good she is.”

Douglas created the Office of the Public Defender for the City of Alexandria in July 1987, to provide legal representation to indigent clients in misdemeanor, felony and juvenile cases. In doing so, replaced a prior system of only court-appointed lawyers.

Douglas, along with nine other attorneys and a supporting staff of eight, has handled a varied caseload, in addition to supervising a clinical education program for law students.

“Melinda Douglas has specialized in the practice of criminal and civil law for over three decades, for the betterment of our City and community,” read Mayor Justin Wilson from his official proclamation. “And [she] has done so under the aegis of seven Bar admissions, ranging from the Commonwealths of Virginia and Massachusetts, to the District of Columbia, following the attainment of her Juris Doctor degree in 1981 from the Antioch School of Law, and did so in several board capacities, task forces, committees, and faculty appointments.”

Commonwealth Attorney Bryan Porter, who often faces off against Douglas in the courtroom, was also on hand to praise her work.

“The Office of the Public Defender is a real institution and has significantly increased the quality of representation for indigents in Alexandria,” said Porter. “We may be adversaries in the courtroom, but we’re comrades outside.”

In an interview with the Alexandria Gazette Packet on the 30th anniversary of the founding of the office, Douglas looked back on the whirlwind of her early years, crediting the office’s success to financial support from the city at a time when her public defender office was one of the first in the Commonwealth. According to Douglas, there were three public defender’s offices across the state that all started up in that year.

“It was an adventure,” said Douglas. “When I went to law school, it was because of social justice [issues], not for money. I never got that thrill from private work. It’s about empowering the unempowered.”

Douglas said working alongside idealistic young lawyers who want to make the world a better place despite the horrible pay is the best part of the job.

“Our office is a family, with a commonality in our mission,” said Douglas. “Never in my 30 years have I had to wonder if what I did was meaningful.”