A domestic dispute turns into a murder-suicide, according to police. 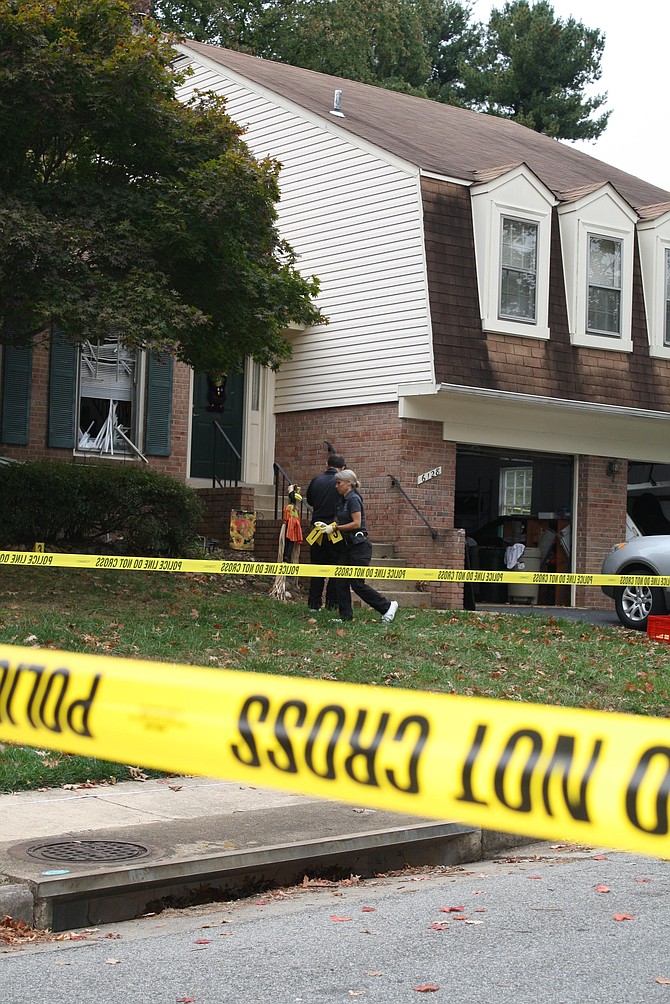 A quiet Burke neighborhood became a flurry of police activity about 9 p.m. on Monday, Oct. 21 as a domestic disturbance turned deadly, resulting

Police were at the scene for hours following the shootings.

in two men and one woman dead at a home on Wicklow Drive in Burke.

Police identified the victims of the shooting as Patricia Marie Bounds, 67, and Sean Patrick Bailes, 19. The deceased suspect has been identified as Marcellus William Bounds IV, 36. All the victims were related, said Fairfax Police Chief Edwin Roessler.

Fairfax County Police Department officers initially responded to a report of a domestic disturbance around 9:11 p.m. A woman reported that a family member had threatened her with a gun. During the violent encounter, one adult male was able to flee the home to summon help, police said.

Arriving patrol officers encountered an armed man who fired shots at them. Two officers sustained injuries that were not life-threatening. After the exchange of gunfire, the suspect barricaded himself in the home. A team of SWAT officers smashed two front windows to gain entry, searched the home, and found two adult men and an adult woman dead.

According to Fairfax County Police Chief Edwin C. Roessler Jr. in a briefing on Tuesday, the first officers at the scene formed a reaction team, and went around back to approach the house, and the suspect “fired his shotgun at the officers,” wounding two officers, before retreating. The police entered the house and found two victims dead in separate bedrooms and the shooter dead from a self-inflicted shot in another area of the house. A reverse 911 system was used to inform the neighborhood.

Martha Burrell lives around the corner and was alarmed at all the activity around nine on Monday night. “So many police cars, I got worried,” she said. “We never have anything like this in Burke.” Another woman who was walking her dog past the scene the next morning was surprised as well. She didn’t want to give her name, but she moved to Burke recently from San Diego, and heard from other neighbors about the incident. “Stuff happens everywhere,” she said.

Police remained at the scene the following day, gathering evidence and conducting an investigation. The road was blocked off and the house was surrounded by crime scene tape. Violent Crimes Division Commander Mike Shamblin confirmed that SWAT team broke in through the windows, and the initial report of the deaths. “That’s part of the investigation,” Shamblin said. “We’ll be out here a couple of days,” he predicted.

The police photographer was taking pictures of the front windows, behind the front bushes, and the trampoline in the backyard. Another officer was collecting numbered flags initially set around the yard marking possible evidence on the scene.

The Office of the Chief Medical Examiner will be conducting autopsies to confirm cause and manner of death. The investigation remains active and ongoing.