Officer used deadly force in two prior cases, both determined to be lawfully justified. 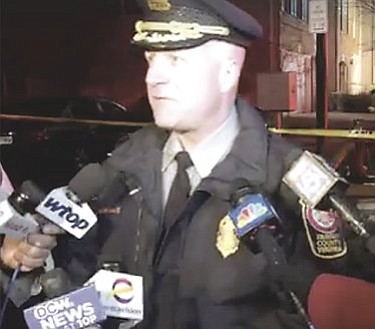 Fairfax County Chief of Police Edwin Roessler has named 16-year veteran Master Police Officer Lance Guckenberger as the officer who used deadly force, killing Mohammad Azim Doudzai at his home in Herndon, the scene of a double shooting and barricade incident on Jan. 16.

Roessler released the name of the officer March 2, after a protracted risk assessment and court action by the officer seeking a restraining order to stop the release of his name. This is the first FCPD officer-involved shooting since the Board of Supervisors adopted recommendations from the Ad Hoc Police Practices Review Commission, including releasing the name of the officer within 10 days of an officer-involved deployment of deadly force unless the chief determines that more time is needed to investigate or mitigate a credible threat to the officer and/or family.

Police say two men were shot inside Doudzai’s house, in the 13300 block of Covered Wagon Lane in Herndon. Officers from the Reston District station responded around 2.40 p.m. on Jan. 16, after the shooting victims had already gone to the hospital. A third man was trapped inside the home with Doudzai, who police said was armed with both a gun and at least one knife. Adding to the danger of the scene were flames and smoke coming from the residence, police said.

In an attempt to de-escalate the situation, members of the Crisis Negotiations team and Special Weapons and Tactics (SWAT) team were called in to negotiate with Doudzai. Guckenberger is assigned to the Special Operations Division responsible for both those teams.

Doudzai eventually came to the front door, where Roessler said both less-lethal and deadly force were used to bring him down.

In a press conference from the scene of the incident, Roessler said the less-lethal force deployed included a taser and 40mm foam bullet. The deadly force was Guckenberger’s service firearm.

The exact sequence of those uses isn’t known, but should be determined at the conclusion of the ongoing FCPD investigation, medical examiner’s findings and decision from the Commonwealth’s Attorney.

A March 2 release from FCPD announcing the officer’s name failed to mention the less-lethal force used. FCPD spokesperson MPO Don Gotthardt said in an email that detail was probably not considered due to focus being on the release of the name and taking care of the officer.

Guckenberger has been involved with two prior cases involving use of deadly force, Roessler said the March 2 release, one in 2005 and one in 2010; in both cases the suspect survived.

The first involved a business holdup on Jan. 14, 2005 in Falls Church and an exchange of gunfire with the suspect in Bailey’s Crossroads. Guckenberger received both the Fairfax County Police Silver Medal of Valor and the Virginia Association of Chiefs of Police’s Award for Valor for his actions in 2005 incident for rescuing the store manager, according to press accounts from the time.

The second involved a man with a history of mental illness who was reportedly using narcotics. He fired at officers multiple times, police said, with what turned out to be a BB gun powered by a CO2 cartridge.

“Both of those matters were determined to be lawfully justified uses of force,” Roessler said, “in which the officer used great restraint while being exposed to suspects who were using weapons against the involved officer while the officer was attempting to preserve the sanctity of human life for others.”

Both criminal and administrative investigations by FCPD into the Jan. 16 incident are ongoing, police said.