Living in the Dark
Votes

Living in the Dark

Could you survive without your iPhone? Do you have an evacuation kit? Are you really prepared for the worst? 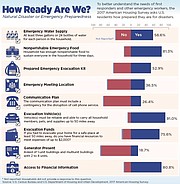 Consider, for a moment, the disaster scenario: A massive earthquake along the New Madrid Fault Line in the American midwest renders the East Coast without power for months. The cell phone networks in Alexandria are down, rendering your iPhone an expensive paperweight. Local grocery stores might have supplies, although they are only taking cash because credit cards aren’t working.

It’s a little like Mad Max on the Potomac, only without Mel Gibson. What’s the first thing you’re going to need?

“Cash,” says Kevin Peach, chairman of the Alexandria Local Emergency Planning Committee. “If the power goes out, which it will, ATMs won’t work.”

He suggests stashing $2,000 in cold, hard cash. That’s money that can be used at the grocery store, assuming the crippled communication network hasn’t crippled distribution channels. After squirrelling away your evacuation funds, Peach says, the next thing on your emergency planning agenda should be an evacuation kit — sometimes called a “go kit” — a container with protein bars, water bottles and a first aid kit. Beyond that is something a little less tangle, an ability to live off the grid.

“People don’t even know how to get to their hospitals because all they have to do is put it into Google Maps,” said Peach, who is chief operating officer at the Texas-based Disaster Services Corporation. “That’s why a cyber attack would be so devastating to us if it knocked out all our communications and power or didn’t allow us to access the internet. It’s scary the things that could happen.”

ALEXANDRIA HAS SOME experience dealing with disaster scenarios, a long history that dates back to the Air Florida disaster in 1982 and continued through the 9/11 attacks in 2001. Mayor Justin Wilson says those experiences prompted city officials to have plans in place for communicating with city residents through reverse 911 and social media. But, he adds, the last few major snowstorms have revealed a major potential problem during any emergency situation, particularly ones that call for sheltering in place for long periods of time.

“It always concerns me when we have one of those big storms that makes it hard for us to get roads cleared in three or four days how many people say these 10 things in my life won’t happen if I can’t get off my street,” said Wilson. “We have residents who contact us and say they don’t have enough medication or they have important medical procedures that happen and they have no way to get there.”

The mayor adds that the government shutdowns have revealed another major weakness — just how tenuous financial situation can be for people who miss one or two paychecks. Wilson says the most recent government shutdown revealed a surprising truth about Alexandria residents who are solidly middle class or even upper middle class households. Many of them would be on the brink of total disaster without a regular source of income for a very brief amount of time.

“That is very concerning, and not just a matter of whether you have $2,000 of cash on hand,” said Wilson. “We had middle class families at food banks in the city during the shutdown because they just didn’t have the cash flow to afford that, and that’s a real problem.”

A RECENT NATIONAL survey revealed that the one area of emergency planning where people are the most unprepared — generating electricity. Four out of five people told the Census Bureau they do not own a generator and don’t have access to one. Purchasing a household generator could cost anywhere from $250 to $5,000, an investment that most people say they have not been willing to make.

“A generator can power your refrigerator and your freezer so your hard-earned money that you’ve put in for your groceries don’t go to waste,” said Ray Whatley, assistant emergency manager for Alexandria’s Office of Emergency Management. “You can have lights, and you can power up your devices to keep your kids entertained.”

But, Whatley adds, having a generator opens a disaster scenario Pandora's Box. How much fuel does the generator need? Where are you going to store the fuel? How far away from your house should the generator be? What are the fire hazards? How long should the extension be from the generator to the house?

“There’s a lot of factors that go into why people don’t get generators,” said Whatley. “It’s one of those things that’s nice to have, but then you start scratching your head and thinking what else do I need to do?”

AS HURRICANE DORIAN slowly makes its way along the Eastern Seaboard this week, people are more focused on emergency planning than they might otherwise be. That has people living near the Alexandria waterfront thinking about storm surge, and state leaders say it should have everyone thinking about the risk of flooding — even in areas that have never flooded before. Setting aside partisan concerns about climate change, state officials say everyone needs to take action now to prevent heartache later.

“Every homeowner should have flood insurance, whether you’re in a flood zone or not,” said Brian Moran, secretary of Public Safety and Homeland Security. “And then have a plan, actually have that discussion with the family and friends about what if a storm were to occur and have that pre-disaster plan already established.”

Moran adds people should also think about what would happen in a cyber attack. The explosion of a nuclear warhead far above the Earth’s surface, for example, could wipe out the country’s communication systems and power grid. A determined group of hackers could damage infrastructure and block access to the internet. And then there’s that potential for a catastrophic earthquake along the New Madrid Fault Line, one that would leave the East Coast without power for months. Is Virginia ready for any of that?

“We’re making preparations,” said Moran, who represented Alexandria in the House of Delegates before his appointment to the Cabinet. “A lot of our infrastructure is owned by private entities, so it requires a good working relationship with the private sector.”

September is National Preparedness Month, and the City of Alexandria encourages everyone to prepare for various disasters that could occur throughout the year.

This year, National Preparedness Month will focus on family and community emergency planning, with the overarching theme "Prepared, Not Scared." National Preparedness Month reminds everyone to be prepared for the unexpected; to learn lifesaving skills such as CPR and first aid; and check insurance policies for coverage of hazards residents could face, such as floods and hurricanes.

The Alexandria Fire Department and Volunteer Alexandria will offer several opportunities to learn how to prepare, including Until Help Arrives and Hands-Only CPR training, and an Emergency Preparedness Fair, all free and open to the public.

This training, which provides information on how to take action in emergency situations while waiting for professional responders to arrive, will be held at Volunteer Alexandria (123 N. Alfred St.). Space is limited; online registration is required.

This training, which provides participants with the knowledge and skills necessary to perform CPR without mouth-to-mouth breaths, will be held at the following locations:

At the City's Emergency Preparedness Fair on Sept. 24, in addition to hands-only CPR training, representatives from the Alexandria Fire Department; Volunteer Alexandria; Community Emergency Response Team (CERT); Department of Transportation & Environmental Services; and the Alexandria Health Department will provide the public with information about emergency preparedness and volunteer opportunities.