Dredging the lake and applying preservation measures is a victory for Accotink. 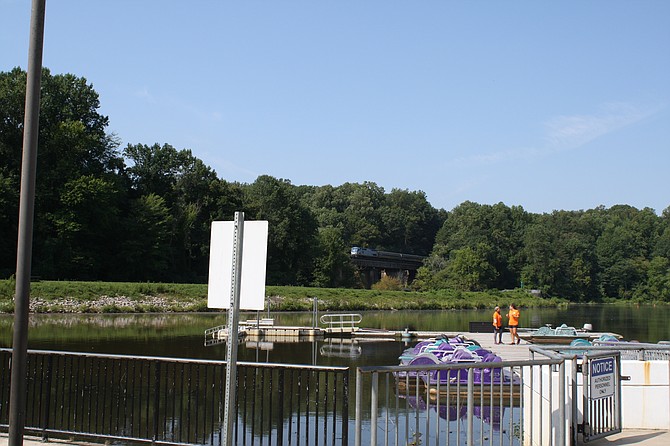 Lake Accotink will be dredged, saving a popular park in Springfield. Photo by Mike Salmon.

There is good news and bad news about the fate of Lake Accotink, the topic of discussion at a recent meeting in the Cardinal Forest Elementary 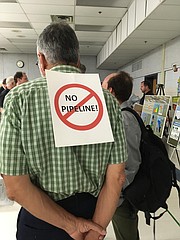 The lake will live on, but some have an issue with the dredging.

School cafeteria. For most of the packed house, the good news that the lake will be dredged and outfitted in such a way that it will be preserved for years to come. How it will be accomplished was not so good to some, including Philip Latasa, who walked around with “No Pipeline,” signs on his back and chest.

The pipeline he didn’t like was the talk of a pipeline that will carry the sludge from Lake Accotink to a spot under the power lines at Wakefield Park, where it will be trucked off to some abandoned quarries in western Fairfax County or Loudoun County. Even trucking it out of the lake would be better, Latasa thought, calling the pipeline a “hideous eyesore.” “We might want to reconsider the possibility of trucks in our neighborhood,” he said.

Allan Robertson, the president of the Save Lake Accotink, agreed. “I’m concerned about the pipeline,” he said.

But the dredging idea was the favorite of most of the people involved, including county officials, so it will be just one part of a $30 million solution to save the lake, which has become a very popular park in Springfield. There were 4,168 signatures on the petition to save the lake. “I think it’s going to be a home run,” said Supervisor Jeff McKay (D-Lee) of the plan, which he and Supervisor John Cook (R-Braddock) worked over several months with other officials and the residents to come up with.

“We have a plan, we are going to save Lake Accotink forever,” added Cook.

The lake is formed by a dam that was put in years ago, and is fed by several streams which carry sediments that settle in the lake bottom. The lake is now four feet deep, in the deeper areas, and it will be dredged to eight feet deep in a process with a submerged pump that will take four years. It was dredged once in the 1985, and then again in 2008.

The $30 million will come from the Virginia Clean Water Fund or the Economic Development Authority, but the explanation of how it will not be completely paid by the taxpayer was a little murky. Somewhere in there, the FY2020-2024 Capital Improvement Plan identifies $50 million for lake dredging in general. As far as the schedule, the county is expected to award the dredging contract in January 2021.

The price includes stream restoration upstream from the lake so that the sediments will not continue to flow downstream at the current rate, preventing another dredging a few years from now. “Lots of efforts to choke down that sediment load,” said one county official.

The spot where the sludge will be dumped in Wakefield Park under the power lines was of some concern, as was the impact the dredging will have on fish, animals and birds. “The problem has moved from Lake Accotink to Wakefield Park,” said one man during the comment period.

Accotink is the second largest watershed in Fairfax County, and the park has become a sight of cultural and natural resources, various types of recreation, and an integral part of the county’s bike trail system. The trail around the lake is part of the Gerry Connolly Cross County Trail Improvements, i.e. the “Cross County Trail,” that stretches from Great Falls to the Occoquan River.