Town Hall Debate at Forestville Elementary attracts full-room audience; no one was indifferent. 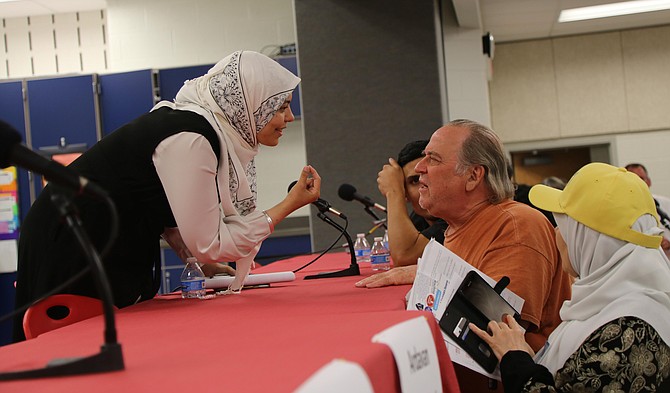 After the meeting, Abrar Omeish, candidate running for the At-Large seat, answers the questions from the audience. Photo by Nadezhda Shulga/The Connection

The candidates debate priority issues raised by the audience.

The activists from Voice of Fairfax are in the front line of the debate on redrawing of the school boundaries.

On Sept. 25, the Great Falls Citizens Association hosted a Town Hall Forum at Forestville Elementary School with candidates for Fairfax County School Board.

Many in the audience came to the meeting well prepared. A group in the yellow hats came to support Abrar Omeish. Other groups were equipped with only homemade signs in a show of support or protest. Some were just armed with stickers. They came to the debate to get to know the candidates better and to support particular candidates.

The cafeteria of Forestville Elementary was full of people, and no one was indifferent. Sometimes school board debates are even hotter than presidential debates – especially when parents are in the room.

Nobody who came Wednesday night was there to stay on the sidelines.

The election for the Fairfax County Public School Board will take place on Nov. 5. The 12 School Board members are elected by district for four-year terms. Nine of them represent the magisterial districts and three members serve at-large. All 12 seats are up for this election.

For 26 years, the Dranesville District has been represented on the school board by Jane Strauss. She is now retiring. Three candidates who are running for this seat are Anastasia Karloutsos endorsed by the Republican Party; Elaine Tholen endorsed by the Democrats; and Ardavan Mobasheri, an independent candidate. All of them participated at the debate. In addition, there were five of six candidates who are running for the three at-large seats.

“Interestingly enough,“ Great Falls Citizens Association President Bill Canis said opening the meeting, ”I found out that the school system in Fairfax County is the third-largest employer in the state of Virginia. We have one of the largest bus fleets in the nation, 1,600 buses. I sometimes feel on the way to work that all 1,600 of those are ahead of me.”

In total, the audience asked 65 questions – more than the candidates were capable of addressing during the meeting. The moderators selected the questions submitted by the audience. All candidates got to offer a one-minute pitch on the selected topic or question.

The first question addressed to all candidates was what they felt about the latest changes in the FCPS boundary policy 8130.8 which regulates the local school boundaries, program assignments, and school closings.

The changing school boundaries is a serious and weighty matter. The issue that McLean High School is overcrowded has been discussed over the last few years. The problem is getting worse every year. McLean HS is already overcrowded by 15 percent while neighboring Langley High School operates at less than 85 percent of its capacity.

Changes in boundaries raise concerns among families who might have purchased a home in the area so their children can attend a specific school.

The School Board has been amending the policy to ensure equity and effectiveness when considering school boundaries. One factor that can be included is the “One Fairfax,” to consider equity. The One Fairfax policy, adopted in 2017, commits the county and schools to intentionally consider equity when delivering policies, programs, and services.

The candidates for Dranesville District member of the Fairfax County School Board were asked to briefly comment on the position on the revised draft.

“I’m against taking children from one school based on their race, and how much money their parents have, their bank account and moving them for that sole reason”, Anastasia Karloutsos explains her position. “I believe that we need to look at boundaries based on overcrowding and looking at how we actually revise our Capital Improvement Program.”

Elaine Tholen said, “The statement says that the biggest reason that we would change boundaries would be capacities, such as what we're seeing between McLean High School and Langley. And I fully agree with that.”

One minute was too short a time for candidates to formulate and deliver a substantive response.

The panel was challenged as to whether they support a schools decision to hire consultants to help with boundary conditions. There were differing views on that, but the majority supported handling this in-house. There were topics related to having more magnet schools and more advanced academic programs.

The organizers of the debate, Great Falls Citizens Association, published the full replay of the two-hour debate on their page on Facebook (facebook.com/GreatFallsCitizensAssociation/)

The review of the boundary policy was initiated because of the following issues:

• Recognition that the current level of bond funding is not sufficient to address capacity demands, renovations (currently a 37-year cycle) and major maintenance in a timely manner

• Planned growth in specific areas of the county

• The current boundary policy has not had a comprehensive review since its 1986 adoption. The county and the school system were significantly smaller at that time.

A modification that allowed a single board member and the Superintendent to make boundary changes impacting 5% or less of a school annually was introduced in 2000 and an expedited process was included in the regulation in October 2015. In 2018, the Superintendent stopped that less than transparent approach.

The One Fairfax policy, adopted in 2017, commits the county and schools to intentionally consider equity when delivering policies, programs, and services.

FCPS staff presented a draft policy in which "capacity surplus or deficit of an existing school" was listed as a reason to revise school boundaries.

The draft policy does not recommend moving students outside of their communities to balance districts based on racial and socioeconomic criteria.

The draft policy does not recommend "open boundaries" which would allow students to enroll in schools other than their base school.

The existing and proposed boundary policy includes the consideration of criteria such as walking and busing routes, travel times, and socio-economics.

FCPS provides transportation services for 139,000 eligible students every day to and from their neighborhood schools or to special programs away from their base schools.

While the majority (76%) of the bus routes in FCPS allow students to spend less than 30 minutes in transit each way, the increased roadway congestion and length of bus rides continues to concern the School Board.

School Board Requested the Superintendent:

• Hire an outside consultant to work with the Board to identify best practices in boundary policy and engage the community in the discussion.

• Identify "hot" areas of overcrowding that are not included in the current FCPS Capital Improvement Program but may need a boundary adjustment.