Amtrak’s service is the only of its kind in the nation. 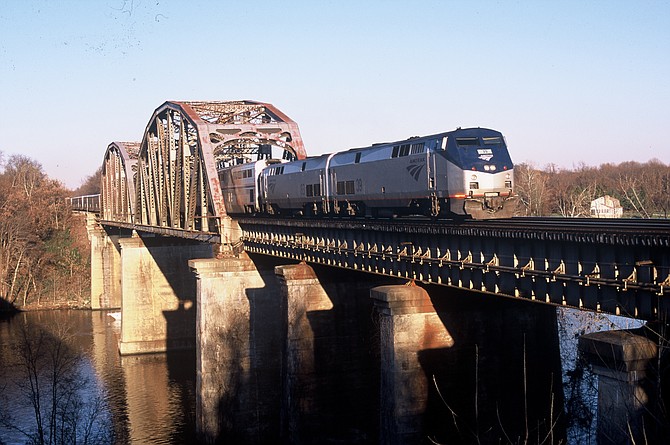 The Auto Train crossing the Occoquan River as it heads south.

The Auto Train in Lorton is the only rail service in the country that lets travelers bring their car for a trip to Florida, eliminating stressful travel on I-

95 and the fuel costs. The Auto Train, which is part of Amtrak, leaves each day at 4 p.m. and arrives in Sanford, Florida the next morning. Sanford is located north of Orlando and west of Daytona Beach.

Sanford is close to Disneyworld, so there are “a lot of advantages for people that have children and going to Disneyworld,” said Kimberly Woods, a spokesperson for Amtrak.

The costs are comparable to air travel. For example, a coach seat for one person is $89 one-way, and about $250 for the car. The fare is comparable to the same trip by air, but then there’s the rental car at the airport, and that could raise the price tag of the whole trip significantly. There are several options on the train instead of coach seating, with bedrooms and meal plans available as well.

The station in Lorton is located off Lorton Road near the Clock Tower, and has seating and snacks available in the lobby. According to Woods, some riders get into the station about 11:30, go through the loading process with their car then have time to take a walk or shop across the street at the plaza. Some riders come in from out of town, stay the night in one of the motels across I-95 on Silverbrook Road, and leisurely come over to the station the next morning.

The Auto Train was the brainstorm of Eugene K. Garfield, who had once worked for the U.S. Department of Transportation. In 1969, Garfield started the company and service began on Dec. 6, 1971 with daily trips in both directions. The Auto-Train became a hit, so that on May 24, 1974, they started weekend service between Louisville, Ky., and Sanford, Fla., but they ran into problems and shut down in 1981. In 1983, Amtrak conducted a feasibility study to restart the rail service, and received such positive feedback that in April 1983, the Amtrak Board of Directors authorized planning for the new service, which began that October.

Amtrak rebuilt the station at Lorton in 1998 while continuing to run the service, replacing the old building and double platform with a $25-million,

Auto Train by the Numbers

Average of 319 vehicles per day

Average of 160 vehicles per departure

31,000 square-foot complex that required an additional purchase of land from the neighboring Lorton Correctional Facility, before the prison closed a few years later, Amtrak said. The new station opened with a "Hollywood-style premiere worthy of a train that runs many vacationers to Disney World and Universal Orlando," they said. Funding for the project was provided by Amtrak, the Virginia Railway Express and the Virginia Department of Rail and Public Transportation.