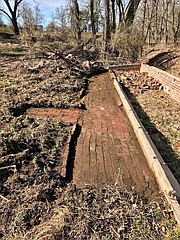 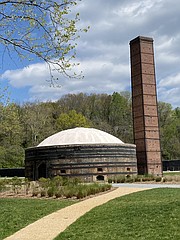 A mystery was waiting to be rediscovered among invasive vines in a section of Laurel Hill Park in Lorton. This past January, a volunteer, working in a section heavily infested with dead kudzu vines, noticed a portion of brick wall poking through the debris. The volunteer, Adam Freeman, of Alexandria, wanted to see more of what was hidden by the vines.

Further delving beneath the overgrowth revealed extensive brickwork pathways, lined culverts, and walls. Freeman described the features as an “extremely well-designed, carefully laid structure.” The layout suggested a formal, terraced garden. However, without a nearby structure its historical use was not immediately clear. An inquiry to the County suggested the area might have been a garden area, part of animal processing, or even animal troughs.

THE SECTION is targeted for reforestation; possibly a controlled burn for final eradication of the kudzu, removal of invasive plants, and planting native trees in the Fall 2020. County Park Authority managers reviewed the site with volunteer team members in early March after the brickwork discovery to determine if changes to the reforestation plan were necessary. Their initial assessment suggested that reforestation plans could likely proceed with care around the bricked portion of the area. The county also might reserve a portion of the site to serve as an open air archaeology class room. No final determination had been made by the county when contacted for this story.

Those who know the history of Lorton will remember that the Lorton Workhouse was built in 1910 and encompassed over 500 acres. It began as a prison farm for non-violent offenders, established for the District of Columbia justice system. About 20 years later, the Lorton Reformatory construction began and continued from 1931 to 1938 as a walled prison, constructed by the inmates with heightened security features. The complex expanded to 3,500 acres at its peak and was in service for 92 years, until it closed in late 1990. The area was sold to Fairfax County in July 2002 for $4.2 million with a requirement that the county plan use for maximum open space, parkland, or recreation. Recently construction began on pathways and picnic pavilions expected to open in Fall 2020.

Bricks used in the classically inspired symmetrical prison dormitory complexes and walls were made on site by inmates. Brick material was clay dredged from the nearby Occoquan River. The prison maintained its own internal railroad line, the Lorton & Occoquan, from 1911 to 1977, and it was used to transport raw and finished brick materials. Inmate brickwork is common throughout the park area.

From 1940 to 1960, the prison farm operation included cows, chickens, and turkeys. For a time, there was a hog ranch located on the present grounds of Occoquan Regional Park. The hog ranch was hit by an outbreak of hog cholera in the early 1950s and approximately 3,000 pigs had to be destroyed. The hog ranch was never able to recover from the epidemic. The dairy and poultry operations continued to provide food for prison and D.C. school consumption.

FREEMAN, a local school teacher and amateur naturalist, who lives in Alexandria, often stops by to enjoy Laurel Hill during his work commute. He is part of a team of park volunteers who share their love for the natural resources found there. The park volunteer team (PVT) sanctioned by the Fairfax County Park Authority, normally holds monthly events to remove trash or invasive vines. The PVT was recognized for their work with an Ellie Doyle Service Award in November 2019. Official information about the Laurel Hill PVT can be found at https://www.fairfaxcounty.gov/parks/laurel-hill-volunteer-team; informal information is on their Facebook page: Laurel Hill Park Ents.