‘We’re in Uncharted Territory, to the Extreme’ in Fairfax City
Votes

‘We’re in Uncharted Territory, to the Extreme’ in Fairfax City 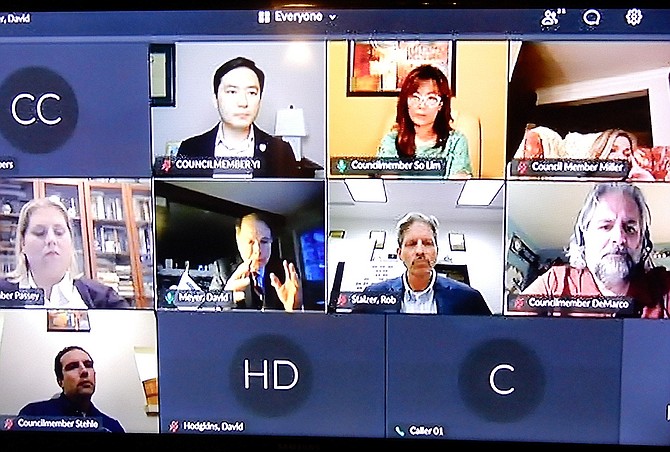 Some estimated revenue decreases anticipated for the rest of this fiscal year.

Like jurisdictions across the nation, Fairfax City is having to revise and drastically slash its proposed FY ’21 budget because of COVID-19 and its devastating effect on the economy. During the City Council’s April 7 work session, City Manager Rob Stalzer shared the bleak details, but also a possible blueprint to guide the City through the weeds.

“According to Old Dominion University’s Vulnerability index, of 36 Virginia cities, Fairfax is ranked number 8, due to the percent of its total revenues that are vulnerable in an economic downturn,” he said. “These are revenues based on discretionary spending.”

To illustrate, Stalzer showed a list of estimated FY ’20 revenue decreases by category, including those based on consumers’ discretionary spending, such as meals tax, vehicle-rental tax and local sales tax. Meals tax, alone, was projected as a 60-percent loss.

“Our meals-tax revenue is approximately $6 million/year, and a 60-percent decrease is a significant hit,” he said. “And for every three months into FY ’21 that the downturn continues, we can expect an additional 5 percent per quarter decrease for each of these categories.”

“Essentially, for FY ’20, these revenue shortfalls translate into a 3 1/2-month decline of about $2.3 million in business revenue,” he said. “And for City operations – primarily Parks and Rec and other fee-based operations – we’re anticipating a $1.3 million revenue reduction.”

However, because of decreases in operating expenses and capital-improvement spending, Stalzer said the City will have the revenue it needs to maintain its 12-percent fund balance of $2.2 million. FY ’21, though, will be much tougher, so he’s recommending keeping the real-estate tax rate at $1.075, not increasing the stormwater tax rate, and setting the Old Town Service District tax rate at 0 cents.

Still, it would result in an estimated overall shortfall of $17.8 million. So he proposed $6 million in budget cuts – but held in reserve so that, “If revenues begin to turn around, some of these cuts could go back into the budget.” They included $2.3 million from FY ’21 initiatives/increases, $1 million from operations and $2.1 million from personnel actions – including 3.5-percent merit raises, plus hiring an assistant fire marshal and adding 1 1/2 positions for Economic Development. And, said Stalzer, “I think those 2 1/2 positions are integral, in terms of what we’re going to need to do to weather the storm and come out the back end.”

He also noted Fairfax isn’t seeing a slowdown in development. “I’m happy about that,” he said. “We’re fully staffed and are doing plan reviews and inspections, getting projects either underway or through to completion.”

Stalzer also wants to continue with the City’s two Small Area Plans “to make the statement that we’re still open for business and moving forward. And all these scenarios are premised on the assumption that I’m going to come back next year with a 3-cent real-estate tax-rate increase.”

MAYOR David Meyer said the Council needs to look at the variables of the tax rate, spending reductions and “the function of time” all together. “We’ll have to get used to some serious ambiguity and make the best decisions we can at the time,” he said.

Councilman Sang Yi confirmed that none of Stalzer’s proposals incorporated any state or federal assistance. “That’s a complete unknown and won’t even come close to fixing our problems,” replied Stalzer. “If something happens, we’ll adjust accordingly.”

“This is a work in progress,” added Commissioner of the Revenue Page Johnson. “We’re in uncharted territory, to the extreme.”