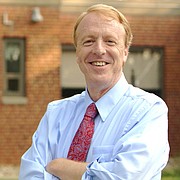 (Click on "Download .JPG" to see large map.) Alexandria has two seats in the House of Delegates.

The history of partisan gerrymandering in Virginia dates back to the 1780s, when Gov. Patrick Henry tried to draw the congressional districts in a way specifically designed to deny his archenemy James Madison a seat in the House of Representatives. The plan failed, and Madison was elected anyway. Ever since then, the history of partisan gerrymandering has been a story of elected officials lusting after power for themselves and seeking revenge on others. The last redistricting in 2011 was so bad that courts threw out two of the three maps.

"There's a House district in the Richmond area that became known as the toilet bowl district because of the way it's strung around, and there's a congressional district that goes from North Carolina to Loudoun County," said Sen. George Barker (D-39), who led redistricting effort for Senate Democrats in 2011. "I think with the new map, you'll be able to see that the districts are better and more compact."

Now that voters have approved a constitutional amendment creating a new redistricting commission, the pieces have already started falling into place for how the commission will work and who will serve on it. Leaders in the General Assembly have already named the judges for the selection committee that will name the citizen members, including retired Arlington Circuit Court Judge Joanne Alper. And party leaders in the General Assembly have selected the "Super Eight" lawmakers who will serve on the panel. All that's left now is for members of the general public to submit their application to the Virginia Division of Legislative Services.

"The more people that apply, the more diverse set of people we'll have to consider," said Barker, who is one of the eight lawmakers who will serve on the commission. "You don't have anything to lose by applying. Please apply if you're at all interested."

TO BE SELECTED, citizen applicants must first grab the attention of one of the four party leaders in the General Assembly. That could mean a letter of recommendation from an elected official who is close to the Speaker of the House. Or it could mean a call to the Senate Republican Leader. But that's only the first part of the process. The 64 resumes that are selected by the party leaders in the General Assembly will go to a five-judge panel, who will get to make the final selection of the eight citizen members.

"They're basically seating a jury," said Brian Cannon, executive director of Fair Maps VA. "The judges are probably looking for people who are going to make really good commissioners because the partisan sorting has already happened at the first phase."

Applicants don't need to be demographers or lawyers to become part of the commission, although that wouldn't hurt. Elected officials or anyone who has ever tried to be an elected official in a partisan election will be excluded from being a citizen member now that lawmakers have approved implementing legislation.

The deadline for applications is Dec. 28, and the commission will start meeting in February to prepare for the Census data to be available in April.

THE EFFORT TO DITCH the old way of redistricting was decades in the making, stretching back to the civil rights movement. Back in 1965, a federal court ruled that Virginia’s congressional districts were unconstitutional because they violated the principle of “one man, one vote." The map for the House of Delegates districts in the election of 1981 was so bad a judge ordered a new election in 1982, promptly followed by yet another election in 1983. One of the more notorious examples of partisan gerrymandering in Virginia happened after the 2010 Census, when Republicans drew maps that a federal court later determined packed Black voters into a handful of districts to dilute their influence throughout the state.

“Be careful in how you describe what you’re seeking,” wrote former Alexandria Republican Chairman Chis Marston in a 2010 email that later became evidence in a United States Supreme Court case. “We need to keep out any hint of unfairness (except the fundamental unfairness of the Voting Rights Act) or partisanship.”

As the 2020 Census approached last year, lawmakers saw a rare opportunity for compromise. Republicans were justifiably worried they were about to lose control, and they were willing to set up a process to take some of the partisanship out of the process. Democrats were eager to finally score some kind of reform of a process they had long criticized while they were out of power. When the two sides became deadlocked, the process moved to a closed-door conference committee of three senators and four House members.

“At the time, it seemed like the best opportunity we had at getting rid of gerrymandering,” said Del. Paul Krizek (D-44), who was a member of the conference committee.

THE COMMISSION that voters approved last month was nobody's ideal model for what a redistricting commission should look like. Instead of an independent commission of retired judges, the panel is instead a bipartisan commission of elected officials and citizen members who have been selected by elected officials and retired judges. Supporters say the two-step process of having party leaders identify a pool of potential candidates that are then selected by retired judges offers a series of checks and balances that will work out in the end.

"Having the judges and going through the process will put a certain degree of separation," said David Ramadan, a former Republican member of the House of Delegates who now at the Schar School of Policy and Government at George Mason University. "It's less likely to have influence on them by individuals or by certain citizen groups that may want to push for one side or another."

The deadline for the five-judge panel to select citizen members is Jan. 15. The commission is expected to start meeting and select a chairman sometime in February. If all goes will, the Census data will be available in March or April. But because of delays caused by the pandemic, the Census numbers might not be available in time to accommodate an August primary for the House of Delegates. That could mean a series of elections in the future that will keep political consultants fully employed for years to come.