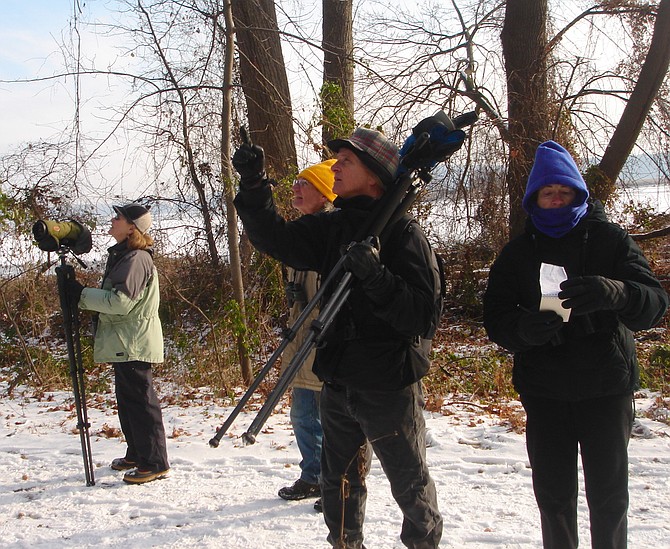 Members of the Friends of Dyke Marsh count birds for the Christmas Bird Count in the marsh and the Potomac River: Paula Sullivan, Ned Stone, Ed Eder and Dorothy McManus. Photo by Glenda Booth 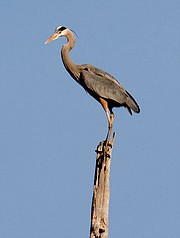 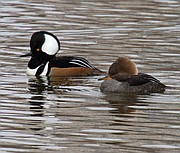 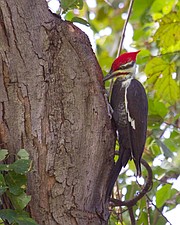 Between Dec. 14 and Jan. 5, volunteers will fan out across the Washington metropolitan area and count birds – birds foraging in fields, hopping around front yards, poking in the leaf litter, perching in trees, wading in wetlands, feeding at feeders, flying, bathing, swimming, sleeping, all the things birds do. These volunteers are bird enthusiasts who will conduct the National Audubon Society’s Christmas Bird Count (CBC), a census of Western Hemisphere birds.

The Christmas Bird Count began in 1900 as an alternative to shooting birds, then a holiday sporting competition. That year, Frank Chapman, an ornithologist, proposed counting birds instead of destroying them and 27 people stepped up.

Volunteers register in advance and conduct each count in an established, 15-mile-wide-diameter circle. They count every bird they see or hear. Generally, there are four surveys in Northern Virginia. A National Audubon map of count circles shows surveys extending from Hawaii east to Newfoundland and from the Arctic south into South America.

Surveyors identify the bird species and record the number of each species. Beginners can pair with experienced birders. Counts are highly variable, affected by factors like weather, vegetation, time of day, pets, human activity and the observers’ limitations. Many birds are missed. Volunteers record birds as common as the American robin and as rare as a greater white-fronted goose.

Last winter, for the eastern Fairfax County count, 170 volunteers braved the cold and tallied 108 species. Two other counts in the northern and western part of the county and Prince William County had 237 volunteers. What’s called the Manassas-Bull Run count identified over 20,000 birds, 86 species. "Compiling the Manassas-Bull Run Christmas Bird Count with the support of over 100 birders is a challenging and rewarding physical and mental exercise. It's great to help birds and have a key role in this oldest, largest, citizen-science project on Earth," said compiler Phil Silas.

Birds are one indicator of the health of the environment and help people understand trends. Tom Blackburn, president of the Audubon Society of Northern Virginia, explains why surveys matter. “Bird surveys are vitally important to understanding the long-term trends in bird populations. The tens of thousands of citizen scientists who participate in these surveys provide information that professional researchers could not possibly replicate and that is used to develop strategies to protect birds and their habitat.”

Larry Cartwright has been surveying birds in the region for almost 30 years and offers some general observations. Woodland birds are stable. This includes most resident woodpeckers (downy, hairy, red-bellied, northern flicker and pileated). Red-tail and red-shouldered hawk populations are stable. Edge habitat species like cardinals are doing well or even increasing.

“Grasslands birds have been hit the hardest,” Cartwright maintains. “Northern bobwhites are gone and grasshopper sparrows are gone except from areas like the Lorton landfill.” Grassland habitats are rare in Northern Virginia. He’s seen a “gradual but steady decline” of great blue herons. Great blue herons are 46-inch-tall, long-legged, bluish-gray wading birds that frequent wetlands.

In the last 50 years, North America has lost three billion birds, 29 percent of the population, according to the September 2019 Science magazine. A 2019 National Audubon study found that two-thirds of North American birds are at risk of extinction because of global temperature rise.

People can support birds by planting and preserving native plants and trees that provide food and shelter for birds. To learn about Northern Virginia native plants, visit https://www.audubon.org/native-plants and enter your zip code and visit Plant NOVA Natives at https://www.plantnovanatives.org/.