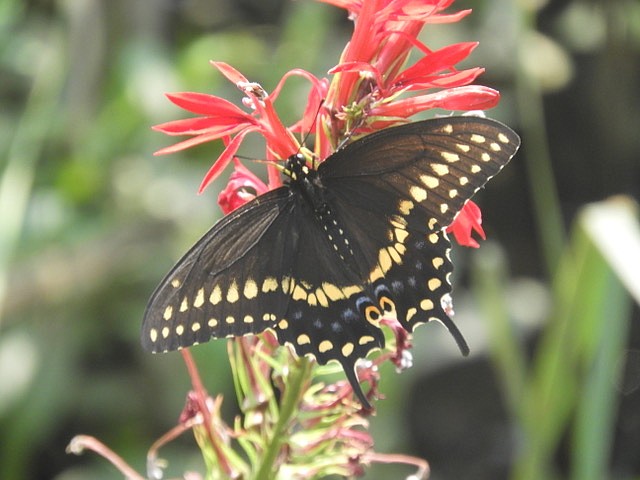 Many people want to eliminate insects, he lamented, but his key message was, life as we know it depends on insects. Without insects, food webs would collapse, plants would not get pollinated, animals would disappear, insect decomposers would vanish and people would be left with bacteria and fungi, he explained.

Tallamy quoted the late Dr. E.O. Wilson, an ant expert, who wrote, “Insects are the little things that run the world,” but Tallamy stressed, though critical to life, insects are in serious decline.

A 2019 study published in Biological Conservation concluded that more than 40 percent of the world’s insect species face possible extinction, a phenomenon the media has called the “insect apocalypse.” A study published in Science in 2020 found that one-quarter of land-dwelling insects have disappeared in the past 30 years. One million species face extinction in the next 20 years and most will be insects, said Tallamy, citing a United Nations report.

“The creatures that keep us alive are disappearing,” he warned.

Many birds depend on insects for food. Birds that winter in Costa Rica and migrate north lose 35 percent of their body weight when they cross the Gulf of Mexico. When they land, they must replace that weight by eating insects. Resident birds too need insects, especially caterpillars to feed their young. A chickadee, for example, needs 6,000 to 9,000 caterpillars to raise two young or one caterpillar every three minutes. But many bird species too are declining in numbers and at least 432 species birds in North America are threatened with extinction, a 2016 analysis found.

He showed a photo of a church surrounded by a treeless lawn and noted the irony that people were inside worshipping God’s creation, but with few to no native plants, destroying it outside.

A major cause of these declines is that people have altered and disturbed natural habitat by replacing native plants on which native insects depend with non-native or invasive plants that give little support. Ninety percent of insects eat only vegetation from plants with which they share an evolutionary history. One of the most famous examples is the monarch butterfly. Its caterpillar eats only milkweed. Other examples: the Pandora sphinx needs Virginia creeper; the Zebra swallowtail butterfly needs pawpaw trees; the evening primrose moth, evening primrose; and the emerald moth, smooth sumac.

Oak trees are champion “keystone species,” the most productive plant, Tallamy contends. In his home state of Pennsylvania, 511 species of moths and butterflies rely on oaks, far more than other trees. Oaks support 557 species of caterpillars in the mid-Atlantic. Non-native trees like gingkos, Callery and Bradford pear and plants like barberry and amur honeysuckle do not support native insects.

Insects are also adversely affected by climate change, herbicides, pesticides and light pollution. Building and street lights can increase predation on insects and cause incineration, collisions, dehydration and disruption of circadian rhythms and mating, Tallamy said.

East of the Mississippi, 85.6 percent of land is privately owned so saving insects requires broad-based action, Tallamy challenged. We must “live in harmony with the natural world sustainably,” he urged, instead of “declaring war on nature.”

He offered some suggestions:

* Cut lawns in half, create beds around trees, add trees and leave the fall leaves for overwintering insects.

* Avoid mosquito spraying, even if companies claim their products are “natural.” These products kill all insects, not just mosquitoes. Use a mosquito dunk or a fan instead.

* Don’t use bug zappers. They kill 99 percent of insects.

Tallamy concluded, “Insects are the currency in our ecological bank account. The insect decline is a global problem with a grassroots solution. We created the problem and we can solve it.”

Tallamy  is the author of Bringing Nature Home, Nature’s Best Hope and The Nature of Oaks and formed Homegrown National Parks (www.homegrownnationalparks.org) to encourage private property owners to restore habitat and ecological networks with native plantings.

Libby Lyons applauded the talk “because his approach is straightforward and promises significant impact. His message is particularly powerful because he enables folks to see how each of us can make a positive difference for conservation right in our own backyards.” Lyons is president of the Audubon Society of Northern Virginia (ASNV). ASNV has free “ambassadors” that will advise property owners. Visit https://www.audubonva.org/audubon-at-home.

The meeting was sponsored by the Audubon Society of Northern Virginia, Plant NoVaNatives, the Prince William Conservation Alliance and the Loudoun Wildlife Conservancy.

How to Find Native Plants