Centreville: ‘We’re Asking a Lot of Drivers in this Area’
Votes

Centreville: ‘We’re Asking a Lot of Drivers in this Area’ 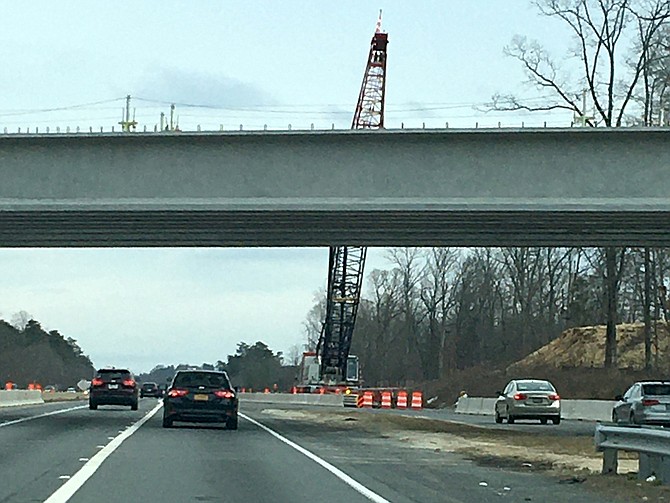 Residents packed the meeting to learn about the road-construction projects in Centreville. 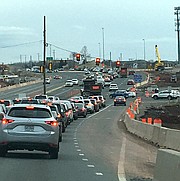 Anyone who’s driven on Routes 28 or 29 in the vicinity of I-66, in the past several months, knows that this portion of Centreville has basically become a VDOT work zone. There are orange cones and heavy equipment everywhere, men in hard hats and, of course, the usual traffic – which is why improvements to the I-66/Route 28 Interchange became part of the Transform 66 Outside the Beltway Project, in the first place.

However, due to rain and other delays, not all of the anticipated time schedule went as planned. Dates changed and became moving targets. However, a great deal of work has now been accomplished and the project is progressing well. This article will include information from the meeting, as well as the latest updates, as of Jan. 31.

Traffic engineer Rich Clifton, with the design-build contractor, FAM Construction LLC, gave a project overview, plus specific details, at the meeting. He began by noting that the E.C. Lawrence Park access from Route 28 has been moved up to 5000 Stonecroft Blvd., and all exiting traffic must leave the park there, too.

He then said the Poplar Tree Road extension “will come in, and Route 28 will be closed, a couple nights, from midnight-4 a.m., to set the beams.” This work was done last week and involved closing Route 28 between Braddock Road and Westfields Boulevard so beams could be installed for the new Poplar Tree Road bridge over Route 28.

“The northbound Route 28 exit to the I-66 east ramp will be pushed up to the intersection,” said Clifton. “Traffic will still be free-flowing but will merge into traffic coming south – and they have the right-of-way.”

*One of the biggest changes that will affect a significant number of people heading toward the Newgate, Sully Station, Sequoia Farms and London Towne communities from Route 28 will be the closure of the two left-turn lanes going from Route 28 north to Braddock Road. Instead, drivers will have to take a detour.

They’ll continue on Route 28 north for about 1.5 miles to the traffic signal at the E.C. Lawrence Park athletic fields.

THE LEFT LANE on Route 28 north will become two, protected, U-turn-only lanes. At the traffic signal, drivers will make a U-turn onto Route 28 south, continue in that direction for about 1.5 miles and turn right onto Braddock.

However, drivers planning to turn onto Route 28 south from Braddock will still be able to do so. “The ramp from I-66 west into the Braddock turn lanes may be closed first, if possible,” said Clifton. “Or [the changes] may all be implemented at once. Southbound traffic on Route 28 will still have a red light so it can turn right. But left-turn lanes won’t have a traffic light stopping them [as they do now].”

As of Jan. 31, an exact date hadn’t yet been set for the left-turn lane closures, but VDOT officials expect this action to happen in the next few months and remain in place, at least through November.

This work is necessary so VDOT may complete bridgework for the new overpass that will connect Braddock and Walney roads over Route 28. These roads used to be connected, many years ago; having them joined again will provide easier and more-direct access to the main part of Centreville for residents living in Cabell’s Mill and other nearby communities.

*Another big project that’s part of the whole was the partial demolition of the I-66 bridge over Route 29 so it can be rebuilt and lengthened. The work started in December and finished Jan. 23. It took off the outside edges of the bridge so more could be added onto it.

Piers are also being added on Route 29 between the northbound and southbound lanes to support the additional width of the I-66 span over Route 29. Ultimately, when this part of the project is finished, I-66 over Route 29 in Centreville will be wider, longer and taller.

It’s being widened to accommodate express and general-purpose lanes, plus shoulders, as well as the space for future mass transit there. Making it taller will create more clearance for trucks and other, oversize vehicles taking Route 29 under I-66.

It’s being lengthened so that, when people are driving on Route 29 under the overpass, there’ll be room for a wider Route 29, with more lanes, under I-66 – also in the future. Widening Route 29 there is not part of the current project but will enable it to someday accommodate these additional lanes.

*But that’s not all. Yet another part of the I-66 project here that will greatly impact local motorists is the closure of the left-turn lane and ramp from Route 29 north to I-66 east in Centreville. It began Jan. 16 and will remain closed for approximately four months for demolition and construction of new, I-66 bridges over Route 29.

TO ACCESS I-66 EAST from Route 29 north, drivers must now stay to the left and continue north on Route 29 to the intersection with Trinity Parkway/Machen Road. At the traffic signal, they’ll use the left-most turn lane only to make a U-turn onto Route 29 south. They’ll then continue on that road until they reach the ramp for I-66 east. Or, alternatively, motorists may continue north on Route 29 to Route 28 north, stay to the right and follow the signs to I-66 east.

“We’re asking a lot of drivers in this area,” said VDOT’S Regional Transportation Program Director Susan Shaw. “But the work at Routes 28/29 is very complicated. We estimate spending $300 million in that interchange. So we advise drivers to stay off their phones and be alert. We’ll focus on safety first, traffic operations and reducing congestion, as much as possible.”

At the meeting, a resident worried about making a U-turn at E.C. Lawrence Park to go southbound on Route 28 during the afternoon rush, “when 20 cars are backed up, trying to make a left onto Braddock.”

“We can’t do the U-turn until we have a 1,200-foot-long, right-turn lane,” replied Clifton. “But there’ll be more green time going southbound so there shouldn’t be as much of a backup there. We believe we’ll be able to make traffic flow reasonably well.”

Another resident said, “For those of us who live in Cub Run and Sequoia Farms, it’s taking us a half hour to get out of our neighborhood. And traffic backs up [on Route 28 south] for five or six lights before we can get through the Braddock Road/Route 28 intersection.”

Hopefully, said Clifton, “Once the U-turn happens, we might be able to put in a triple, right turn there.”

For more information, go to outside.transform66.org.