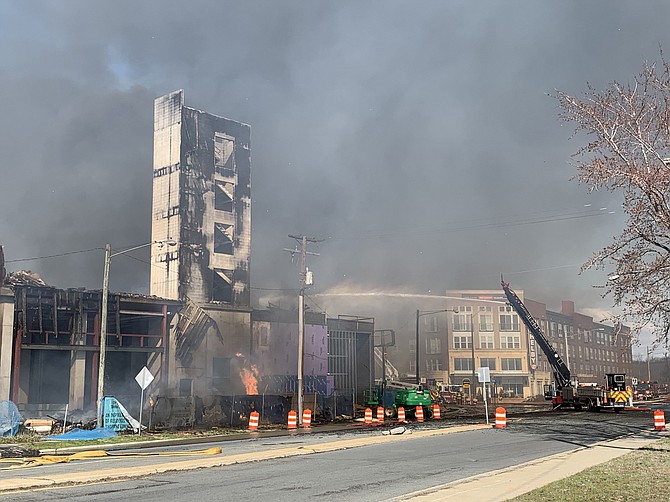 Looking from South Kings Highway, the fire spread to other structures in the area. Photo contributed 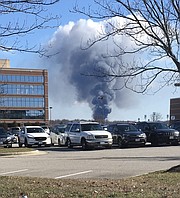 Smoke could be seen from as far away as Kingstowne.

On Saturday, Feb. 8, at approximately, 9:40 a.m., Fairfax County Fire and Rescue responded to reports of a building fire in the 2800 block of Poag Street in the Groveton area of Fairfax County. Units arrived on scene within three minutes and reported an advanced fire from the top floor of a five-story building that was under construction.

The fire spread to five buildings and 14 townhouses that were under construction. All these properties are considered a total loss. The fire damaged an additional 14 townhouses, four single-family homes, five apartment buildings, a commercial building, and 28 vehicles.

Fire investigators determined that a worker at the construction site noticed a fire in a trash chute. The worker called 911 and attempted to extinguish the fire. The attempts were unsuccessful and the worker evacuated the property.

Dominion Power turned off the power to the immediate area. The Red Cross, Fairfax County Office of Emergency Management, and complex management assisted those residents that were displaced.

The property and content values for all the buildings and vehicles involved has not yet been determined. The origin and cause of the fire remains under investigation.

The fire was in a key area of Fairfax County’s Embark project, which is “an initiative focused on creating a multimodal future for Richmond Highway Corridor where residents, workers, and visitors can walk, bike, or drive to the places they want to go,” according to Fairfax County. The fire was right in the center of the section called the “Penn Daw Community Business Center,” on the Embark map, and about one mile from the Huntington Metro Station on the Yellow Line. The housing projects that burned were one of the first parts of Embark to be built so far.

Mount Vernon Supervisor Dan Storck (D) is heavily involved with Embark, and looked at the fire as something that has significant short-term impact on the redevelopment of the Penn Daw area but not a deal breaker. “The County is committed to getting this project back on track as quickly as possible and is assigning a senior team to work with the developers to make this happen,” Storck said.

In the days following the fire, access to North Kings Highway was limited, and parts were closed due to fire recovery efforts.