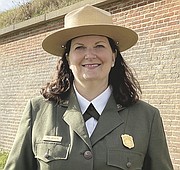 The National Park Service announced the appointment of Tina M. Cappetta as the next superintendent of the Chesapeake and Ohio National Historical Park, replacing Kevin Brandt, who retired from the position last fall. Brandt served 23 years in the position.

Cappetta is considered a committed team-builder and park manager. She brings more than 31 years of experience to the position which she begins on Jan. 21.

“Tina has built successful teams and strong partnerships throughout her career,” acting National Capital Area Director Lisa Mendelson-Ielmini said. “I admire the spirit of collaboration she brings to her relationships with National Park Service employees, partners, stakeholders and volunteers.”

“I look forward to returning to C&O Canal where I served as chief of resources management 15 years ago, Cappetta said. “Although a lot has changed, a lot has stayed the same—C&O Canal is a fascinating and beautiful park with exceptional staff, dedicated volunteers, committed partners and wonderful communities. I’m honored and eager to lead the team in the park’s next chapter, including celebrating its 50th anniversary in 2021.”

Cappetta earned a bachelor’s degree in government and politics from the University of Maryland. She holds certificates in the context of environmental policy from George Washington University and legislative studies from the Government Affairs Institute at Georgetown University.

She and her husband, Ron Batcher, who works for the Dept. of Agriculture in Washington, D.C., have three children—a senior in high school and two attending University of Maryland Baltimore County.