Was this just the drought-related water use? 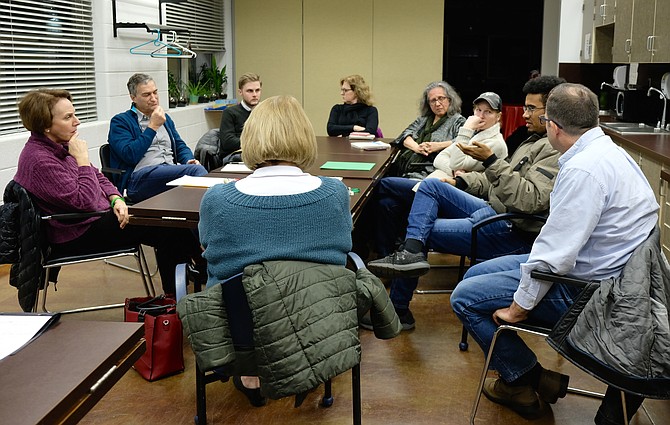 Residents buttonhole Arlington County Board Chair Libby Garvey at the Open Monday meeting at Langston-Brown Community Center. Homeowners were upset that their water bills had tripled or quadrupled, for no apparent reason, and brought other concerns to Garvey’s attention. Photo by Eden Brown.

Unhappy Arlington residents gathered at Arlington County Board Chair Libby Garvey’s “Open Monday” meeting on Jan. 6 at Langston Brown Community Center. On their minds was the recent spate of higher than normal water bills, many of them costing homeowners more than $1,000. Ten people have bills of over $1,000; one single woman had a bill of $3,000, and another had a bill for $2,300.

Others have bills in the high $800s and $900s. Many were angry about responses they received from County utilities personnel who suggested homeowners were clearly using more water, possibly due to water leaks, despite the uniform jumps in neighbors’ bills.

Tina Chancey attended the meeting as the focal point for residents with water bills over 1,000 dollars. Chancey said if the water bills were due to the drought they should be roughly 15 percent higher, not the 116 percent average bill increase many people, including 60 people in Ashton Heights, were seeing. Chancey is putting together a spreadsheet of high bills in order to get the problem addressed in context: when whole neighborhoods see a jump the problem appears to be systemic.

Mike Cantwell, president of the Yorktown Civic Organization, noted that what bothers people the most is the response from the staff: it’s either assumed this is the homeowners’ fault, or in one case, the staff suggested the resident should be happy with the bill they have: it could go up if they check the meter. Cantwell said he wondered if the water main break on Glebe Road could have caused this, but he didn’t even raise it with the utilities staff because “we knew what the answer would be: ‘it is the residents’ fault.’” Both Cantwell and Chancey think the problem is systemic.

Garvey responded sympathetically, noting that she knew the County Treasurer herself came in the other day holding up a higher than normal water bill. She promised to address both the issue and the responses given by the staff.

The county has tried to get ahead of the residents’ ire by sending out a notice on NextDoor.com which states: “Water bills sent out toward the end of 2019 and into early 2020 reflect consumption that includes the period of drought the region sustained from summer deep into autumn. Arlington's collective consumption in September 2019 alone jumped 14.4% from the previous September. In addition, the combined water/sewer rate rose from $13.62 to $13.80 per 1000 metered gallons on July 1, 2019.”

Those who attended the Monday meeting were adamant that drought could not be the sole cause of the dramatic increases in water bills that far exceeded the collective increase in consumption of 14.4 percent.

See https://water.arlingtonva.us/customer-service/resolve-high-bills/ for more information on getting your home inspected for potential exterior leaks and on conserving water. There are other possible reasons for a high water bill, including faulty or misread meters, as well as new, automated meters that read water usage more accurately and could be responsible for identifying higher usage.

In an unrelated, according to Garvey, request, the County is asking residents to respond to a survey on water billing: how should this change, should residents be rewarded for using less water, and other issues. See: https://water.arlingtonva.us/water-and-wastewater-utility-rate-study/

If you’ve never been to an “Open Monday” session, this is an informal way to bring matters of concern to the attention of individual board members; they relay the concerns to the larger board and respond. At this small, conversational meeting, about 12 residents were present, sitting around the table with the board chair, Libby Garvey. Topics raised included the shortage of affordable housing for one young resident, who believes there are vacant apartments going unrented; zoning changes and Housing Conservation Districts, including the impact of changes in High View Park and the distrust caused by perceived lack of notice to people who lived in the HCD’s; issues with parking a trailer on the street; notice of an upcoming meeting on restorative justice; and shortages in mental health treatment options for young people. The Arlington Mental Health and Disability Alliance representative invited Garvey to attend a meeting on Jan. 11 to highlight priorities for mental health treatment in the county. And, at least six attendees had water bill issues.