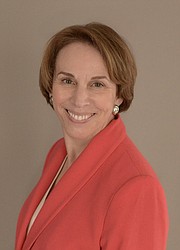 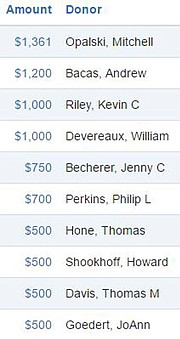 While incumbent County Board Chair Libby Garvey started with a high account balance, $27,566 carried over from previous elections, Garvey has lagged behind Gutshall in fundraising since the beginning of 2016, currently totaling $34,598 raised. 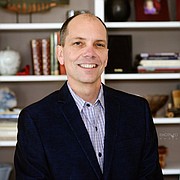 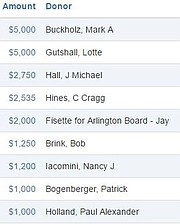 County Board Candidate Erik Gutshall’s top donors in 2016 so far include County Board member Jay Fisette’s campaign and Nancy Iacomini, member of the Arlington School Board. Since Jan. 1, Gutshall has raised $51,981.

Two years ago, County Board member Libby Garvey refused to back the Columbia Pike Streetcar. Garvey also backed Independent and anti-streetcar candidate John Vihstadt in two elections against fellow Democrat Alan Howse. For Garvey, the streetcar and the Long Bridge Aquatics Center were representative of a reckless spending spree that had grown out of control. The divide between Garvey and the Arlington Democratic establishment became so bitter that, faced with the prospect of being ejected from the local party, Garvey opted to resign from the party. The streetcar ultimately died, Vihstadt won his reelection, and the County Board has moved on.

But two years later, the ramifications of those decisions could be coming back to haunt Garvey. The current County Board chair rattled the party establishment and she faces primary opponent Erik Gutshall, who has the endorsements Arlington state legislators and support from Board Member Jay Fisette. Gutshall is a former member of the Planning and Transportation Commission and is the founder of Clarendon Home Services.

"Erik [Gutshall] has the experience and vision to ensure the county's long-term prosperity, sustainability, and success," said Del. Richard “Rip” Sullivan in a statement posted on Gutshall’s campaign site. "History shows us the dangerous implications of short-changing critical investments, and I'm confident Erik [Gutshall] will meet our community's obligations to future generations in a budget-conscious way, as he has demonstrated time and again as a civic and business leader.”

While incumbents traditionally enjoy an advantage in elections, Garvey faces a battle against the leadership within the Democratic party. Despite this, Garvey says her campaign focus hasn’t changed.

“Basically, I’m running the campaign the way I always I have,” said Garvey. “I have a clear vision for what Arlington needs, and for the last 20 years I’ve helped make Arlington a better place to live, work, and play.”

Garvey says her priorities center around making the county processes more transparent and fiscally responsible. On transparency, Garvey pointed to the recent video broadcasting of County Board work sessions, the planning and transportation commission meetings. Garvey says there was some pushback from the Planning Commission, but that she felt opening those meetings up to the internet was necessary.

“People would have had to come in and sit through those meetings to get an idea of what we’re doing, but this makes it easier to connect,” said Garvey.

It’s Garvey’s idea of fiscal responsibility that’s drawn the most fire. The Long Bridge Park Aquatics Center, for example, had been delayed in 2014 after costs were listed only as “significantly higher” than the proposed $79.3 million. At the same time, the county faced backlash for spending $1 million in local and federal funds on a single bus stop in Columbia Pike. Since that time, the aquatics center proposal has been scaled down to $40 million.

“When the aquatics center first came to us, it was over the top,” said Garvey. “That’s not what people wanted.”

On this, Gutshall agrees with Garvey.

“The first vision [for the Aquatics Center] was not consistent with the bonds that were to finance it,” said Gutshall. “The county did the right thing to scale it down. What was not responsible was using it as a wedge to divide people. Calling it a ‘vanity project’ was irresponsible. Now you hear people saying ‘I don’t swim, why should I pay for a pool’ and that’s not how you build communities.”

Now that the center has come back to the board, both Garvey and Gutshall say they’d be more likely to consider funding it.

“This is an investment we need to make,” said Gutshall. “That’s the fiscally responsible decision.”

But in other circumstances, Garvey says the board didn’t act where it should have.

“A year ago, the schools came to us with a beautiful Thomas Jefferson school design, but we decided they needed more community engagement,” said Garvey. “But it was not needed. We lost a year, and we need to be more responsive to the school’s needs.”

Here’s, it’s Gutshall who says the county was right to delay to gather more community feedback.

“You have to balance between competing interests,” said Gutshall. “The original decision not to approve Thomas Jefferson was a smart decision. We needed more community engagement.”

One of the more recent initiatives promoted by Garvey is a Blue Ribbon Panel, a County Board-selected group that looks through Arlington Comprehensive Plan and establishes priorities for county resources.

“We don’t have a way to balance our priorities and that’s crucial,” said Garvey, which is why she says she helped launch the Blue Ribbon Panel. “It looks at what we need to put into place for larger strategic planning.”

But Gutshall is not as enthusiastic about the prospect of Garvey’s new panel, and sees it as a step backwards for the community engagement Garvey’s advocated as a tentpole of her campaign.

“There’s no public input into the Blue Ribbon Panel at all,” said Gutshall. And while Gutshall’s involvement in the county has largely been through the similarly appointed planning and transportation commissions, he says those commissions work at a “grassroots” level and actively include public testimony.

Like Garvey, Gutshall says the county's priorities need to center around helping the schools find the space and funding for growth.

“We don’t have more land so we’re going to have to get creative,” said Gutshall.

But it’s not just the schools that face a land crisis. Gutshall says that the county’s housing policies have been slowly pushing out Arlington’s middle class. For Gutshall, affordable housing in Arlington can’t just center around those at 60 percent area median income or less.

Gutshall says the county needs to look at its zoning policy to try and find a way to incentivize more options for middle income families. Currently, Gutshall says housing in Arlington falls into three categories: single family homes that are not affordable for most families, high density that comes with a very urban lifestyle, and townhouses that inevitably wind up being luxury focused.

BUT BEYOND the specific Arlington issues, part of the Garvey vs Gutshall primary battle centers over what it means to be a Democrat.

On her near-expulsion from the Arlington Democrats, Garvey says she has no regrets.

“I’m 65,” said Garvey, who says her first memories of politics were JFK’s election and that she demonstrated against Richard Nixon, “I’ve been a Democrat all my life. There’s been one time when I supported a non-Democrat and that was an unusual circumstance. I believed that the streetcar was a disaster, and my top loyalty has to be to the people of this county …. Fiscal responsibility is a Democratic value. We shouldn’t be wasting money that should go to the people who need it.”

Gutshall argues that where Garvey went wrong by her fellow Democrats wasn’t in her position on these issues, but the highly politicized manner that set members of the County Board and citizens of the county against one another. Though he’s got the backing the local Arlington Democratic leadership, like the state legislators, Gutshall insists that anyone supporting him to be their puppet on the County Board is sorely mistaken.

“In the Democratic party, there’s room to take whatever position you want,” said Gutshall. “There were plenty of Democrats that were against the streetcar … Until five months ago, I had never been to an Arlington Democratic Committee meeting,” said Gutshall. “I’ve always been a Democrat, though I’ve never been involved [like this]. We’ve held parties for candidates at our house but I have never been involved … I’m here because I’m qualified … and because of my values. I have these endorsements because I’ve earned them. I am an independent thinker, and anybody supporting me to carry some specific [party] line is supporting me for the wrong reasons.”