Nuclear Reactor at Fort Belvoir is Going Away
Votes

Nuclear Reactor at Fort Belvoir is Going Away

Five-year project coming to dismantle and dispose of this lesser known feature of the base. 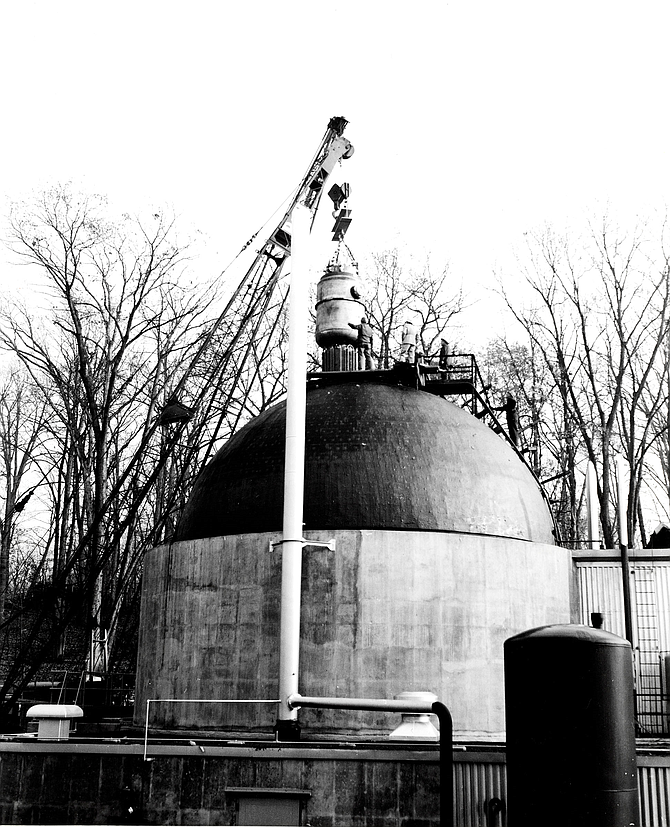 A nuclear facility on Fort Belvoir is being removed, starting this summer.

Overlooking the shore of Gunston Cove in Fort Belvoir is the SM-1, a nuclear power plant that provided power to the base from April 1957 to March 1973, now being removed. This lesser known feature on Fort Belvoir has sat dormant for years in a fenced off area but is now in the final stages to be totally removed from the site, and the land allowed to return back to the original forested shoreline that it once was.

Christina Nahi lives just outside Fort Belvoir with her children and was a little alarmed when she got word of the plans to remove the facility through a neighborhood chat website. “I live really close and didn’t know about it,” she said, Nahi was amongst a handful of people that showed up Jan. 8 at the Army’s presentation in the South County Center, known as the Gerry Hyland Government Center, on to find out more about this project. “I’m surprised it never came up,” Nahi said.

The US Army Corps of Engineers (USACE), Baltimore District proposes to fully decommission and dismantle the SM-1, known to the Army as the

To find out more and comments:

These documents are available online for review and USACE is accepting comments from the public through January 31. Comments can be submitted via e-mail to http://cenab-cc@u...">cenab-cc@usace.ar... or by written mail to:

“Deactivated Stationary Medium Power Model 1 Reactor Facility,” on Fort Belvoir to a standard that allows for release of the site for unrestricted use, according to an official statement. Under the proposed action, US Army Corps of Engineers would implement an Army Reactor Office-approved Decommissioning Plan to safely remove, transport, and dispose of remaining structures, equipment, and media from the Deactivated SM-1 site; validate that site conditions meet applicable cleanup standards; restore the site to a vegetated condition; and return the site to Fort Belvoir for future use. Through analysis and evaluation of the proposed action’s potential environmental impacts, US Army Corps of Engineers concludes that there would be no significant adverse impacts on the physical, cultural, and natural environment.

According to Brenda Barber, the Corps of Engineer’s project manager for the move, “no one was ever in danger.”

The plant was deactivated and placed into safe storage in 1973. In the 1973-74 time frame, “the dismantlement and decommissioning involved the removal of a majority of the radioactivity from the site, including the removal of the nuclear fuel and control rods,” their information stated. There is still some residual radioactivity contained inside some portions of the facility. The majority of the remaining radioactivity is activated metals and components of the reactor system which is secured within the walls of the facility’s containment vessel.

The USACE is expecting to award the project in the summer of 2020, start the process in 2021 and complete the removal in 2025.

There is a truck route planned through Fort Belvoir to haul the materials out, and the officials have mapped out a route that leads past seven houses and out of the base to Richmond Highway. From there, it will go to an “appropriate permitted facility,” in the western United States said Hans Honerlah, one of the USACE project officials.

“The pressure vessel will come out as one unit,” he said. There will be 1,150 truck trips, coming and going throughout the project, and “we’ll go out Tulley Gate,” Honerlah said.

The SM-1 at Fort Belvoir is one of the three deactivated reactors, along with the SM-1A at Fort Greely in Alaska and the MH-1A that was aboard the STURGIS barge which is currently in the late stages of decommissioning in Galveston, Texas.

These documents are available online for review and USACE is accepting comments from the public through January 31. Comments can be submitted via e-mail to cenab-cc@usace.army.mil or by written mail to: