‘It Takes a Long Time to Master this Job’
Votes

‘It Takes a Long Time to Master this Job’

Behind the scenes with a police K9 officer. 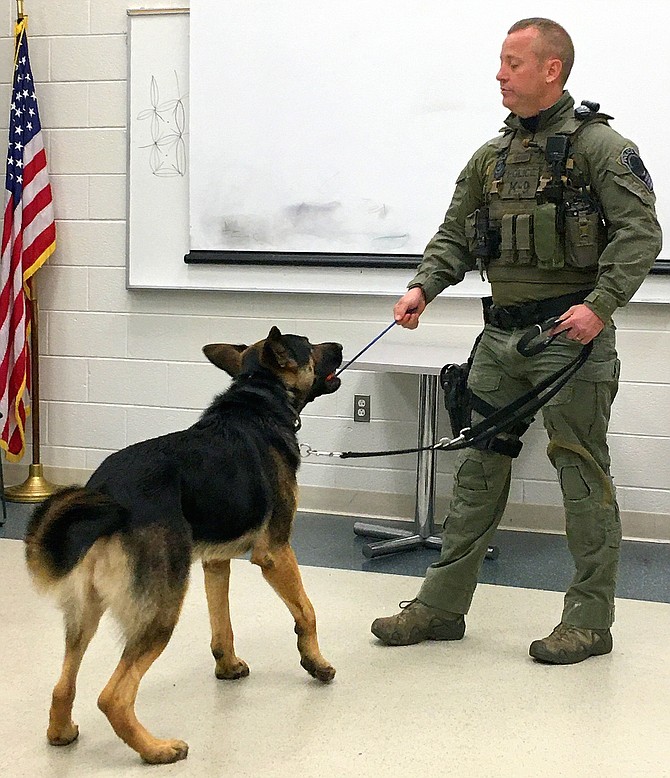 Each month, members of the Sully District Police Station’s Citizens Advisory Committee (CAC) learn about a different aspect of police work. And recently, they received a presentation on the K9 unit from K9 Officer Brad Weeks.

Weeks – who’s been a K9 officer for 10 years – works with two dogs, an 18-month-old, German Shepherd named Dozer and a bloodhound puppy named Juneau. And Dozer accompanied him to the CAC meeting and illustrated how he responds to Weeks’s commands.

“Fairfax County police have 15 patrol/narcotic dogs, plus three bloodhounds,” said Weeks. “The patrol dogs are trained to alert on narcotics and in searches. Their agility enables them to jump over obstacles, go through tunnels and climb up ladders.”

He also said these dogs will go into places that were broken into and will bark if someone’s there. And, he added, if necessary, they’ll bite the suspect to apprehend him. “But what we do the most with them, is tracking,” said Weeks.

PATROL DOGS go through an 18-week training school. Bloodhounds are trained in scent-specific tracks and are usually used in searches for missing children and adults.

“For example, bloodhounds sniff the odor on a missing person’s clothing and can do tracks that are 24 hours old,” said Weeks. “And when they find them, they’re trained to jump on, but not bite, the person. Patrol dogs are better following fresh tracks.”

In Fairfax County, the Police Department’s Explosive Ordnance Division has four or five dogs, and the Narcotics Unit has five or six. There are also therapy dogs, as well as one dog in Cyber Forensics, looking for thumb drives. Weeks said this dog is trained to smell a thumb drive’s glue.

He said the K9 dogs usually cost $8,500-$9,000 each and come from overseas. “We get hounds as puppies and train them as we go along,” said Weeks. “They’re lazy, so we have to make them want to work. German Shepherds don’t need constant rewards and praise like bloodhounds do.”

Most K9 dogs live in their handlers’ homes and have free run of the house. “Dozer is super-friendly but has only been on the street for six weeks, so I’m still teaching him,” said Weeks.

Basically, he explained, “I want a well-balanced dog that wants to work and is confident and won’t run away and be scared. He must also be easily adaptable to every environment without shutting down. And he should be sociable and friendly with people. But when I tell him it’s time to go to work, he can [quickly] turn it on and do his job. He should also be obedient, but not constantly challenging me.”

Weeks said most suspects will submit to a dog faster than they will to a police officer – “and that’s kind of why we have them.” He said most K9s are male and that it generally takes three to four years for an officer to become a handler.

“The school is mainly about training the handler,” said Weeks. “I train every night with Dozer because he’s a new dog. And every two weeks, he has a scheduled, full day of training. He’s still learning even being around people.”

He said deciding whether to deploy the dog is done on a case-by-case scenario. For example, said Weeks, “During a pursuit in Loudoun [County], a man disappeared into the woods, and I let my dog go into the pond by the side of the highway. Then I saw a guy lying face down in the water. He didn’t come out when I asked him to, so I sent my first dog, Cody, in to bite him – and he came out of the pond like a swamp monster.”

When looking for someone, said Weeks, “We always take other officers with us – especially other K9 officers, if possible. Usually, there’ll be a helicopter overhead, shining a beacon. And we also have night-vision equipment.

“It takes a long time to master this job, and you’re constantly learning things,” he added. “But we try to do it as safely as possible. I have a passion for dogs – and you need to have that passion to be a good K9 officer. You really get out what you put into it.”

WEEKS then took the meeting attendees outside and demonstrated some of the things he’s taught Dozer to do. They also met Juneau, who was inside the officer’s vehicle.

“To become a K9 officer, you have to shoot expert on the range, run an obstacle course and take an oral test,” said Weeks. “Then you’re ranked against the other officers vying for the job. And the outcome also depends on how many openings there are when you’re applying.”