What Is 5G Anyway?
Votes

What Is 5G Anyway?

Meeting encourages residents to get informed about 5G; some say dangerous, some say ugly, others say essential. 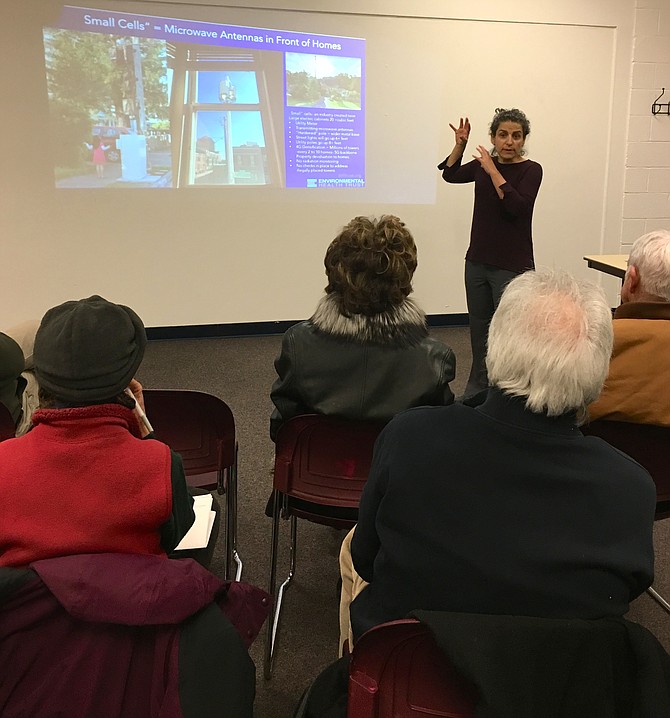 Theodora Scarato, an advocate for the Environmental Health Trust, presents information on the dangers of 5G technology at a meeting at Potomac Community Center Jan. 22. Photo by Peggy McEwan

Potomac resident and environmental health advocate Theodora Scarato held a meeting at Potomac Community Center Jan. 22 to raise awareness of radiation from cell phones and the cell towers that are increasing around the County as the United States moves towards 5G technology.

Wikipedia says: “5G is the fifth generation wireless technology for digital cellular networks that began wide deployment in 2019. As with previous standards, the covered areas are divided into regions called "cells", serviced by individual antennas. Virtually every major telecommunication service provider in the developed world is deploying antennas or intends to deploy them soon. The frequency spectrum of 5G is divided into millimeter waves, mid-band and low-band. Low-band uses a similar frequency range as the predecessor, 4G.”

“5G is more cell towers and more cell phones and more wireless everything,” Scarato wrote in an email. “So [the meeting] was about the push into a technology for which there are safer alternatives.”

About 40 people attended the meeting, which Scarato said she took as a good sign. Most seemed concerned about the number of new cell towers needed for implementing 5G.

An audience member noted that D.C.’s test does include some of Montgomery County, coming up Wisconsin Ave.

“Who’s pushing 5G?”, Mark King, of Germantown, asked, then answered. “The driverless car industry; a driverless car can never be out of contact with a cell tower.”

“I disagree,” Robert Janko, another attendee, said. “Driverless cars have operated for 10 years without a problem.”

That did not mean Janko was in favor of more cell towers. He is a member of mocoSafeG.org and encouraged others in the audience to contact County Council members about more cell towers which, according to the flyer he passed out, are not needed.

“There are serious problems regarding these cell towers – potential cancer risk to your health, drop in home values and negative aesthetics,” mocoSafe5G wrote in its flyer.

Montgomery County’s website says 5G “is the coming fifth-generation wireless broadband technology based on the IEEE 802.11ac standard. 5G will provide better speeds and coverage than the current 4G. 5G operates with a 5Ghz signal and is set to offer speeds of up to 1 Gb/s for tens of connections or tens of Mb/s for tens of thousands of connections.”

While many residents are concerned about poles so close to their houses, it’s not always because of health concerns.

Another member of the audience said, “I do not think there is a health concern here. I would hate to have a 5G cell tower in my front yard because I think they are ugly.”

As the meeting went on, more and more audience members offered opinions and ideas, exchanging ways citizens can have more influence over the approval process for cell towers.

The conversation seemed to slip from health concerns to politics.

Scarato said she was glad to have her planned presentation move into a conversation on the issue.

“I’m just thrilled there are so many engaged people. They want a choice; they want transparency and they want to be part of the process.

One solution to new towers and higher speed technology, she said, is “moving towards putting as much data traffic on fully wired networks [which] would offload a lot of the capacity needs that industry says they are trying to meet.”

“I hope readers will be curious about the issue and look into it. Be aware that wireless companies…have paid scientists and PR firms working to whitewash the issue,” she said.

“In our increasingly digital world, wireless connectivity is essential to every imaginable technology, from phones and tablets to buses and Metro trains to manufacturing and medical equipment. Wireless will be bigger and more pervasive in the future than today — that is as clear as anything could possibly be.”

Pending before County Council is zoning text amendment ZTA 19-07 that would:

Allow wireless facilities on poles in the public right-of-way by “limited use” when those antennas are set back at least 60 feet from the nearest building, plus numerous other screening, color, and size/height conditions.

Allow wireless facilities on poles in the public right-of-way by “conditional use” when those antennas are between 30-60 feet from the nearest building, plus numerous other screening, color, and size/height conditions.

Does not allow antennas on poles that are closer than 30 feet to the nearest building.

Ken Silverman, in Reimer’s office, said they hear from businesses who say 5G will be important to future growth and deploying future strategies. But he adds, “There isn’t a rush on this; we do want to do it right.”