Reconsidering Police in Schools in Alexandria 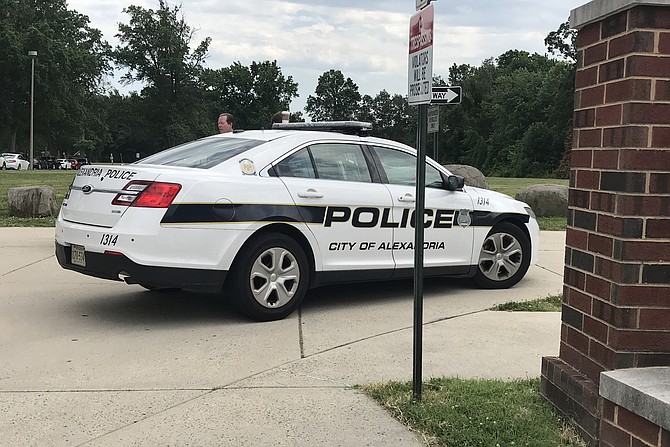 Earlier this year, rising senior Fina Osei-Owusu encountered a yelling crowd while walking the second floor B wing of T.C. Williams High School. A conflict was escalating between several Black female students and school resource officers, sometimes known as SROs. Osei-Owusu also saw her friend involved in the argument and watched her yell back at an SRO who had screamed at her.

“I already knew that something was going on,” said Osei-Owusu, president of the Black Student Union. “I saw a school resource officer holding back another school resource officer from an altercation with a student. I was worried that my friend would get in trouble. If they are going to protect us, then why are they fighting with us? It made a lot of students resent them.”

She’s not alone. Many people are now questioning the need for having police in schools. Divisions across Virginia are re-evaluating their relationships with law enforcement in light of new calls to examine the problem of police brutality. Fairfax County Public Schools recently revised its contract with the Fairfax police, clarifying that SROs don’t have the authority to discipline students.

“There is some value in having the officers there, as long as they stay outside of the administrative things,” said Alexandria Police Chief Michael Brown. “I don’t want them telling someone to take their hat off; that’s not their job. It really is a call that the School Board will have to make. We don’t want to be where we’re not wanted.”

A 2018 contract between the school division and the Alexandria Police Department explains the authorities SROs have while assisting with law enforcement. They have access to student records, can search belongings of students, and can stop and question students on criminal activity without parent or administrator authorization.

“Why (do they) need transcripts?” asked Mikaela Pozo, a recent graduate of T.C. Williams. “What exactly do SROs do in schools? How much power do SROs have?”

Alexandria NAACP president Christopher Harris opposes police in schools and, like Pozo, questions the role SROs have in the school environment.

“It’s not clear as to what they do,” said Harris. “It’s a foothold into the criminal justice system. I don’t see them having a beneficial purpose without stringent regulations, which they currently don’t have.”

“We don’t want to be where we’re not wanted.”

“I’m concerned SROs may contribute to the school-to-prison pipeline and create an intimidating school climate for students,” said School Board member Michelle Rief.

STUDENTS HAVE a variety of views on the SROs, and the issue is layered with the individual experience students bring to their interaction with police. Osei-Owusu never did find out what that altercation was about on the B wing, and she doesn’t let that cloud her perception of police in schools. She says she recognizes the positive relationships several Black SROs have with minority students at T.C.

“It’s important that we have Black security,” said Osei-Owusu. “It is more crucial that since the student population is predominantly Black and brown, we have security officers that reflect that. I’ve noticed that the Black security guards at T.C. are the ones who check minority students, promoting an education. I always hear, ‘Hey, get to class; be on time.’”

The access SROs have to student records doesn’t bother Kate Casper, a rising senior at T.C.

She’s had positive experiences with SROs and thinks they contribute to students’ safety.

“I always feel safe at T.C. A great school resource officer actually helped me get my phone back from a kid who stole it on the bus,” said Casper. “They are really nice guys and they do a great job.”

The ACLU of Virginia opposes police in schools. According to Executive Director Claire Gastanaga, SROs perpetuate the school-to-prison pipeline.

“The things that, when I was in school, would get you sent to the principal’s office now get you sent to juvenile detention centers,” said Gastanaga. “The police people are there to arrest people; they’re not there to be friendly. They’ve turned routine school disciplinary matters into criminal prosecution of kids.”

At some point in the near future, the chief of police and the superintendent of schools will meet to discuss the future of the school resource officer program in the school system. Ultimately, though, the Alexandria School Board will make the determination on whether to continue the contract with the police and if any changes should be made.

“I don’t believe this is necessarily a binary decision,” said School Board Chair Cindy Anderson.

The School Board will review its school police contract in July, as agreements between school divisions and police departments are reviewed every two years in Virginia. Proposed changes and opportunities for public comment will come in the fall.