Barclay Brass ensemble hammers out tunes for the neighborhood. 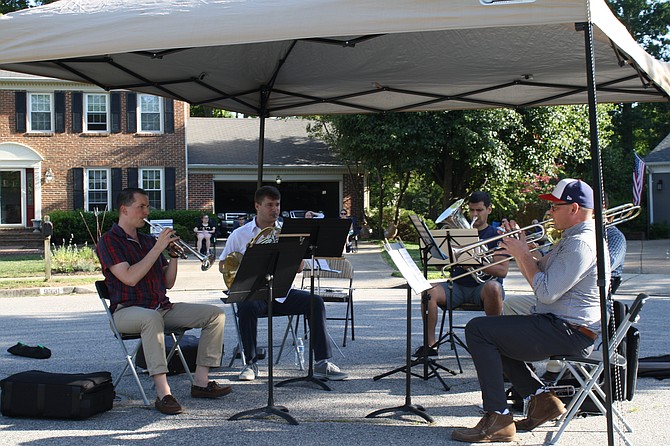 The band plays on. Photo by Mike Salmon.

the protests and police brutality that was happening elsewhere, even if it was for a few hours from a lawn chair in the front yard.

“Music is something that brings us all together,” said David Miller, one of the organizers of this impromptu concert on a neighborhood street near Yacht Haven. The sounds and social aspect brought everyone out to hear the Barclay Brass perform. “I wanted it to be a socially distanced concert,” he added.

Everything fell into place on Monday evening in a Mount Vernon neighborhood, with the band setting up under a tent in the middle of the Maybrook Court, and families in groups scattered in the front yards, enjoying a brass ensemble In between ensemble songs, a couple of cello players performed.

“Nice break from what’s going on,” said Martin Schaefermeier, from a lawn chair in his front yard.

Days before, a police officer killed George Floyd, which led to civil unrest, including fires and violence in Washington, D.C. the night before the concert. It was all over the televisions, and on everyone’s mind so the musicians came together to let them concentrate on something else for a while.

David Miller is part of the band and an emcee on this day.

“Something to look forward to, art and community at the same time,” said Molly Diaz, who’s husband Hiram was on one of the horns called a euphonium. She was there with her children Ana, Lydia and David, and a well-behaved dog.

The civil unrest and the curfew in Washington, D.C. did have an impact to the concert that night though. Nathan Clark had to take Brandan Eubarr’s spot because Eubarr was in Washington, and Hiram Diaz was in for Willie Clark, because they both had to remain in to adhere to the 7 p.m. curfew that was in place from city officials.

Beforehand, Miller ran the idea by the Fairfax County Police Department to make sure he was following the pandemic gathering guidelines, and let the group know that’s what he did before the music started.

“We strongly encourage all attendees to maintain proper distance and have masks at hand,” the instructions on the flyer read. Although traffic through the court was halted during the performance, one Amazon delivery driver stopped short of the court and walked the package up to one of the houses.

Staff Sgt. Charlaine Prescott, a cello player in the Marine Band, showed up and did a solo part of the way into the show. Prescott is a West Potomac High School alumni that joined “The President’s Own” United States Marine Band in December 2013 and was appointed principal in April 2018. She began her musical training on piano at age 6 and cello at age 10. As she joined the group with cello case in hand, a member of the audience commented how she was glad there was a woman in the group. Others in the group included Nathan Clark and Brad Weil on trumpets, Alex Kovling on horn, David Miller on trombone, Willie Clark on tuba and Josephine Elting on cello.

In 2017, Barclay Brass was part of “The Force at 40”, the 40th anniversary celebration of the release of Star Wars, which was held at the Smithsonian’s National Air and Space Museum. In 2018, they were featured in a video produced by TIME magazine and the Smithsonian to commemorate the 50th anniversary of Stanley Kubrick’s “2001: A Space Odyssey.”