Praying for a nation that will move from being ‘not racist’ to affirmatively becoming antiracist. 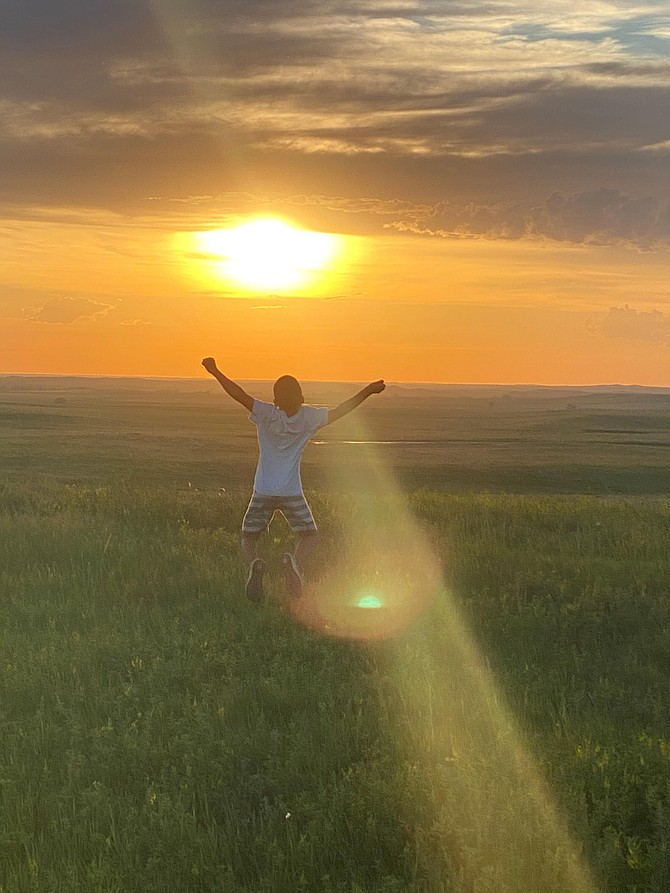 The photo capturing a hopefulness and enthusiasm for life that was wholly inconsistent with the last week.

One week after George Floyd was executed in broad daylight on a busy city street over an alleged $20 dollar counterfeit bill, we crossed into South Dakota’s Badlands National Park. My 7-year old’s joy was unrestrained. It was probably the joy of being unleashed after a 10-hour RV ride. To me, the photo my 12-yr old took captured a hopefulness and enthusiasm for life that was wholly inconsistent with the last week.

We had reserved the RV the previous Sunday - a seemingly fail proof plan to travel self-contained during a global pandemic with me, my husband and our three kids and two nieces (all aged 7-14). For the previous 11 weeks, the kids had been confined to a narrow 2 mile existence between our home and my sister’s. This trip was meant to be an escape from our Coronavirus-necessitated confinement.

The excitement our family felt as they sent us off was tempered by something else: a wearied wariness embedded in exhortations to be careful, stay safe, and call us when you get there; and fear - they were fearful for us, an African-American family planning to visit state and national parks, long seen as the purview of White America, when the country was erupting around us. We had already been laboring under the disproportionate impact COVID-19 was having on the lives and livelihoods of Black and Brown communities. And then we all watched as a White police officer, sworn to protect and serve, kneeled for 9 minutes on the neck of a Black man who pleaded for breath while handcuffed and facedown on hot asphalt.

As we left Virginia, there was a common refrain: Avoid Michigan - the armed White militias that stormed the capital might be looking for trouble. Avoid Minneapolis where White police officers can execute Black men with seeming impunity (it had taken 5 days for the officer who had squeezed the breath out of George Floyd to be arrested).

While at Cuyahoga Valley National Park, I found myself making sure I smiled harder than necessary, trying to appear less threatening to the White folks we passed. Not necessarily for my safety, but for that of my African-American husband and my son, the same age as Tamir Rice was when he was gunned down in nearby Cleveland over a toy gun. Everything about the trip was fraught - from the interstate highway system that made our journey possible but whose creation had torn apart thriving Black communities to what should have been an innocent bird watching expedition (remember what happened in the Brambles). From the “Police Lives Matter” sticker on the back of a pickup at one of the campgrounds we visited to the utility vehicles blocking exits to downtown Chicago as we traveled along I-90/94 West. At every stop for gas or other necessities, the Coronavirus pandemic wasn’t my primary concern, the pandemic of racism and possible assault on the brown bodies traveling with me was. Would the crisp $50 bills the ATM dispensed be mistaken for counterfeit tender?

As we crossed into South Dakota from Minnesota, my 7 year old son asked if we were close to “the “Bad Place,” the name he recalled for the Badlands. The nation’s first peoples, whose lands were systematically dispossessed and whose people were systematically exterminated, named this area mako sica (land bad) because of the harsh and unforgiving landscape. I looked into his beautiful, searching eyes and silently prayed a prayer of protection for the little brown boys who will grow into Black men and wondered how long I would be able to keep him and his brother safe from the bad place that would follow them their whole lives, just as it has for my husband, my father, and their fathers before them. How do you protect someone from the bad place when it is all around us: the water you drink, the equitable health access and treatment you don’t receive, the justice that is consistently denied, and for far too many, the use of force too capriciously and extremely applied.

For all of our sakes, I hope this moment doesn’t end up being just the latest in a long string of state sanctioned violence against Black and Brown bodies; I pray instead for a nation that will move from being “not racist” to affirmatively becoming antiracist and developing the moral conviction and political will to exterminate the bad places.

If you have the opportunity to visit the Badlands, I highly recommend it; it is terrifyingly beautiful, harsh and life giving at the same time. Come to think of it, it’s not unlike the gauntlet Black bodies run daily in this bad place.