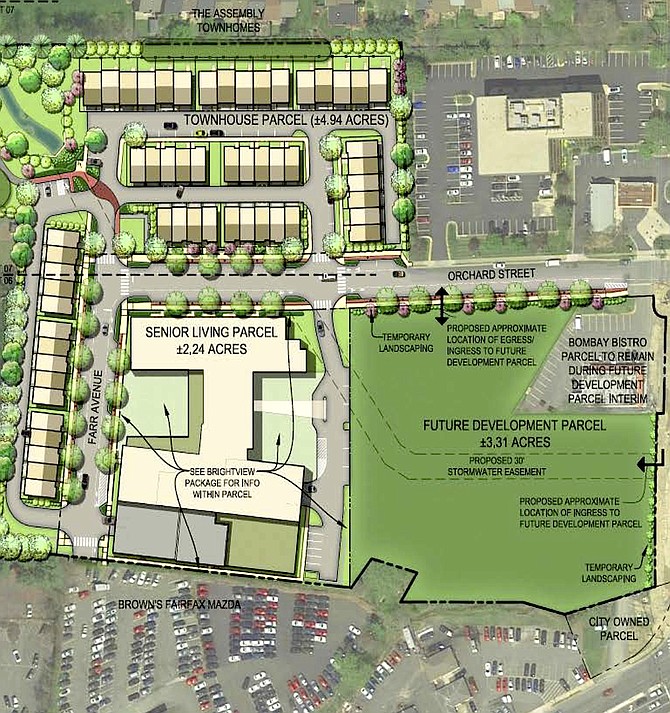 Artist’s rendition of the townhouses to be built by Madison Homes.

It’s been years in the making, and last week, the Fairfax City Council greenlit a sweeping proposal to revamp and revitalize the City’s Northfax West area. It entailed a rezoning, special-use and special-exception permits and approval of The Lann Company’s Master Development Plan.

The OK came after a nearly 5-hour public hearing, last Tuesday, July 14. Citizens were divided, but the Council stood united. “This is an activity center,” said Councilmember So Lim. “And it’s a place where we can support growth for the City of Fairfax.”

THE PROJECT also includes the extension of Farr Avenue and the restoration of part of Accotink Creek in Van Dyck Park, an 8-foot trail to Perry Street and Howerton Avenue, plus a pocket park and tot lot for the townhouses.

Concerned about the environment, Councilmember Sang Yi asked, “What kind of flooding could we expect once the site is developed and becomes even more impervious?” Brooke Hardin, director of Community Development and Planning, said the culvert would consume the 100-year floodplain and be designed to eliminate this property’s current flooding.

And Mayor David Meyer noted all the money this project is anticipated to bring into the City’s coffers. “It’s expected to be just under a quarter of a billion dollars – just in our real-estate tax base,” he said.

Attorney Lynne Strobel, representing the applicant, said the senior-living building would have an “H” shape to reduce its mass, and stressed that it’ll be the first senior-living facility in the City.” She also said the trail will connect the Cobbdale neighborhood to Chain Bridge Road. “We’re contributing to the City schools financially for capital improvements,” added Strobel. “And we’re providing open space and planting about 200 trees. This project will enrich the community and serve as a catalyst for further development, in keeping with the City’s plans for this area.”

Then, after 21 people called in to voice their comments, pro and con, during the online meeting, the Council discussed the plan once more and then approved it unanimously. “Moving forward on Northfax has been a City goal for 25 years,” said Councilmember Janice Miller. “With citizen input, we overhauled the Comprehensive Plan, and Northfax – including this proposal – was a cornerstone of it.”

Yi said he’ll take the applicant-provided information in good faith and hoped it’ll work with residents who have problems with parts of it, such as the trail near their homes. “We need the development,” he said. “What’s there now isn’t suitable for the City’s growth. We’re here to advocate for our residents, and I really appreciate the citizen input – we heard you. But I think the pros outweigh the cons here.”

COUNCILMEMBER Joe Harmon said this project is about balance. “Once we lose green space, we won’t get it back,” he said. “But this area has always been planned for commercial development, and I like the stream restoration in Van Dyck Park.”

“We have to do what’s right for the long term and future generations,” said Councilmember Tom Ross. “And we need to be competitive to support our tax base.” He also called the new trail connections “a tremendous benefit to the citizens.”