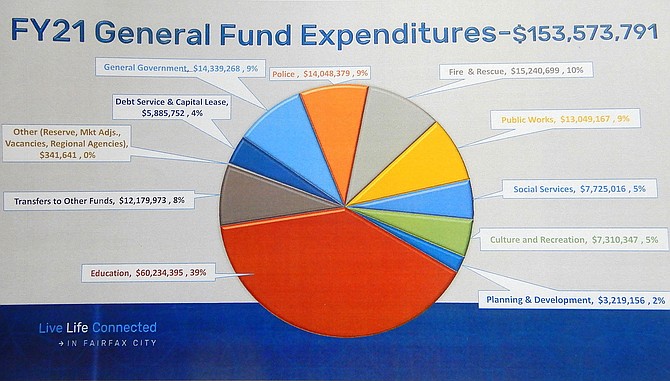 Fairfax County isn’t the only local jurisdiction proposing a 3-cent real-estate tax increase. If City Manager Rob Stalzer has his way, Fairfax City may do the same thing.

Praising his budget team for all its hard work, he presented his proposed Fiscal Year 2021 budget, last Tuesday, Feb. 25, to City Council. However, a tax increase isn’t necessarily a done deal.

“Over the next several months, we’ll take a deeper dive into the budget and the CIP [Capital Improvement Program],” said Stalzer. “And we’ll have work sessions and ample opportunity for additional discussion.”

In order to keep homeowners’ tax bills the same as last year, the City would have to drop the real-estate tax rate by 2 cents to $1.053. However, with all the City hopes to do to increase the quality of life for its residents, it doesn’t seem likely that this scenario will happen.

REAL-ESTATE TAXES comprise 50 percent of Fairfax’s General Fund revenues. Yet, over the last decade, citywide real-estate valuation has increased just 2.6 percent annually. And, said Stalzer, that’s worrisome. Even though Fairfax’s growth in 2019 was better than 2018’s, the City still lags behind its neighbors. Its 2019 growth rate was 3.95 percent, compared to the regional average of 4.28 percent.

“We’re in a better place than last year, but still below the regional average,” said Stalzer. “That concerns me. We’ve made tremendous progress, and this budget recommends the amount needed to continue it.”

The proposed budget also focuses on the City’s adopted strategic goals of enhancing its economic development, redevelopment, transportation, neighborhoods and governance. Stalzer said it also aims to “continue delivering outstanding value while improving the experience of businesses and citizens in their dealings with the City.”

Although nearly half the General Fund budget involves nondiscretionary expenses, Fairfax’s commercial tax base increased by 6.25 percent in the last fiscal year. So City officials hope to continue this upward momentum by redeveloping more of Fairfax’s commercial-activity centers.

The CIP’s purpose is to both preserve and enhance existing facilities, while providing money to respond to changing service needs and community growth. And although it’s a long-range plan, it’s reviewed and revised annually to keep it relevant and dynamic. The proposed FY 21 budget contains a multi-year, fiscal plan to fund the FY 21-25 CIP of $102,522,401 and accomplish projects important to the City’s future.

Noting that Fairfax’s Parks and Recreation Advisory Board (PRAB) has been working since 2014 on improvements to the City parks, Stalzer said his budget recommends a path toward funding the Van Dyck Park Master Plan in FY 24, with construction of $10 million in improvements in FY 26.

No increase in the C&I (Commercial and Industrial) real-estate tax rate is planned. But there’s a wastewater utility rate hike of 8 percent – which is 2-percent less than in previous years – to support the City’s share of capital project costs required for the Noman Cole Wastewater Treatment Plant.

THE DOCUMENT also recommends a 3.5-percent merit raise for eligible employees. It does not contain a COLA (cost of living adjustment), but a 2.5-percent market-rate adjustment was applied to employee pay scales to retain parity within the region.

Regarding schools, the proposed budget includes a $5 million increase to fully fund the City School Board’s FY 21 contract with FCPS. Yet with all this budget attempts to do, it still maintains the City’s 12-percent undesignated fund balance and AAA bond rating, while also creating an additional, capital-project reserve fund.

“Every now and then, we receive a budget that’s completely different – and this is one of those years,” said Mayor David Meyer after Stalzer’s presentation. “This gives us a clear picture of the challenges and requirements, and we’re all appreciative of the staff’s hard work in putting together this budget.”

The Council made no comments on it last week because several work sessions are already scheduled for the coming months. However, Meyer told the residents, “These are the resources provided to us by our citizens and businesses, and we take that fiduciary responsibility seriously.”