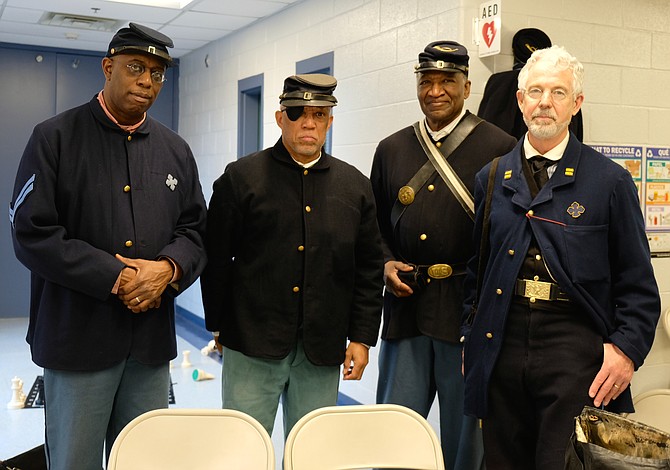 Bryan Cheeseboro (left) and friends dressed in uniforms appropriate for the 54th Massachusetts Volunteer Infantry, Company ‘B’, telling the story of the freed African Americans who fought for the Union Army. For more information, see: www.54thmass.org Photo by Eden Brown. 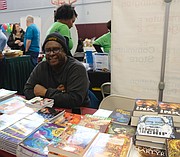 Bill Campbell, a local book publisher whose company, Rosarium Publishing, is a fledgling publisher specializing in speculative fiction, comics, and some crime fiction — all with a multicultural flair. The books are available on a variety of platforms, including Amazon. For more on his titles, see: www.rosariumpublishing.com 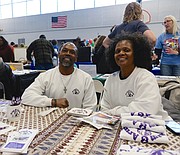 Kelvin Manurs, Founder and Board Co-Chair of Arm & Arm, and Sandra (Dee) Carr, the lead facilitator for Arm & Arm, man the table for their group, a peer to peer empowerment and support group for formerly incarcerated residents and veterans. https://www.armandarm.org 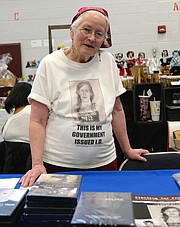 One of the first Freedom Riders and an Arlington tradition, Joan Trumpauer Mulholland sells videos and books about her experience marching in Selma and demonstrating for equal rights in the sixties. www.thejtmfoundation.org

Arlington appeared in full community bloom in the pre-spring, pre-virus “Feel the Heritage Festival” on Feb. 29 at the Charles Drew Community Center. This was the 28th year for the annual festival which celebrates Arlington’s African American history and culture. Crowds exceeded expectations, according to one of the festival managers. The atmosphere was typical Arlington: diverse, upbeat, a little old-fashioned, a little progressive, and political. There were more than 30 government and community vendors, more than 30 artisans and commercial vendors, great southern food, and an entertainment lineup featuring the X-Factor Band, Encore Stage and Studio, Lomax AME Zion Church Celestial Echoes, the Mount Salvation Baptist Church Incredible High Praise Dance group, and others.

VIsitors to the festival could learn a lot. There were Master Gardeners willing to divulge the secrets to a good vegetable garden; Alyscia Cunningham with her book about women with Alopecia and other forms of hair loss. Many went home with pockets stuffed with freebees like visibility strips for walkers handed out by “Walk Arlington” and free whistles and coloring sheets of forest animals.

“Free Forest School” representative Carmen Iasiello talked about her outings for young children to learn the benefits of being in nature (www.freeforestschool.org) Politicians were out shaking hands, including John Vihstadt, who did not deny that he might be a candidate for public office again; and candidate for county board, Chanda Choun; Del. Alfonso Lopez, as well as stands run by several political organizations like Arlington Dems and We of Action Virginia.

This is a festival that hums with creativity and entrepreneurship, community and color, history and Kim Miller’s haikus. To get involved in next year’s festival, email:Lbarragan@arlingotnva.us