Dance in the Moment with Arturo Perez in Arlington
Votes

Dance in the Moment with Arturo Perez in Arlington 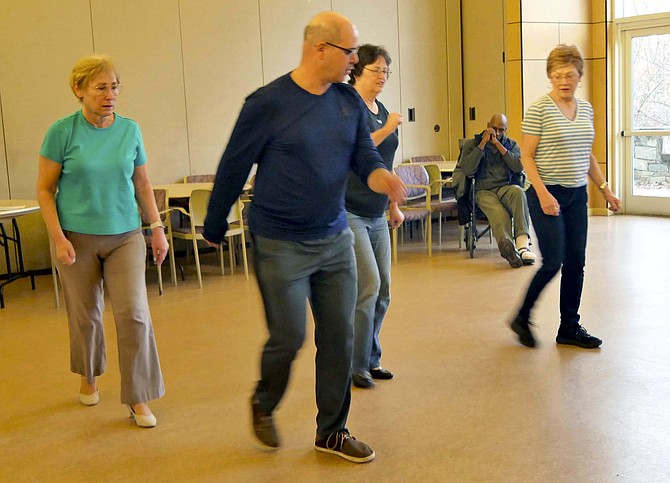 “Wastin’ away again in Margaritaville” fills the room as Arturo Perez leads his ballroom class for seniors at Walter Reed Community Center on Monday, March 9. This is part of a eight-week class offered by the Arlington County Department Parks and Recreation 55+ Senior Center program, currently on hiatus due to coronavirus.

Perez says he really does enjoy teaching an array of people giving them the tools to dance with a partner. “In the beginning I oversimplify and as it gets harder, I point out details. It would be overwhelming if I focus on details first.”

Perez explains his approach is to try to set people at ease in the first class. He jokes, “I see you have a right foot and a left foot.” Perez asks what they are interested in learning and he listens. “The act of listening is difficult these days. You don’t have success if you don’t listen.”

This session his first class started with the merengue. “It is a 1-2. I simplify it, not the details of moving the hips. I make it fun.” Barbara Robin, one of his students, says Perez is really good at seeing who has more experience and helping each person individually.

Then the next class repeats what they learned in the first class and progresses to what they would like to learn next. “I keep asking what do you want to learn.” A couple of classes ago the answer was the tango. “I told them that is the most beautiful but the hardest dance.” He said they worked on it, but later they didn’t want to go back to it, and instead returned to the foxtrot.

The music switches over to “brown eyed women and red grenadine...”

“Let me go over the steps and when we finish the class we’ll all wash our hands.”

“Remember small steps. Let’s turn. Left turn, right pivot. Remember when you turn, you have to use all of the steps.”

Perez says he has been dancing since he was a baby. Since his mom loved to dance she would hold him and dance around the room. Later as he got bigger since his dad didn’t dance, when they had personal gatherings his mom would dance with him on her feet. Now he has been teaching dance for almost 30 years.

He and his wife came to Virginia several years ago from New York City where “teaching dance is all I did.” He taught principally swing dance, Lindy Hop, Latin. He says he loves swing which encompasses a genre of jazz 125 years old from the 1914 foxtrot to the early ’20s Charleston to the late ’30s jitterbug. He says the most difficult mechanics is the 1927 Lindy Hop. In addition to performing, Perez taught a fall prevention program for aging people for 10 years.

Perez’ current class began Jan. 27 and was scheduled to end March 16 with another class to begin March 30-May 18 Walter Reed and a new class to be added at Langston-Brown March 24-May 5. However, Arlington County announced on March 13 that Parks and Recreation activities including classes have been suspended until at least April 14. For information about rescheduling, contact: Walter Reed at 703-228-0955 or Langston-Brown at 703-228-6300.

Elsa Angrist, a student in the 55+ ballroom dancing class, says she and her husband go on cruises and do ballroom dancing, and she forgets between cruises. “My favorite is the waltz. I understand it.” Angrist says last week there were only three people in that session, which she attributes to the coronavirus scare. “I was the only woman. They wore me out.”

Dru Dowdy says this class sounded like fun and she is hoping when her husband recovers from his upcoming knee surgery that he’ll be able to join her. “Some dances are easier. The foxtrot is easier than the tango.”