Alexandria People At Work: Dancing the Afternoon Away
Votes

Alexandria People At Work: Dancing the Afternoon Away

Dancing the Afternoon Away 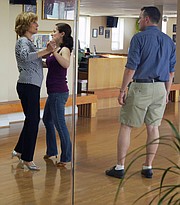 Reflections in the floor-to-ceiling mirror assist Lindsey and Gregory Bearce with their posture and dance steps at Dance Studio Lioudmila in Alexandria.

Shiny silver heels glide over the polished wooden floor. Today Lioudmila Blinov will review the steps of the Argentine tango with Gregory and Lindsey Bearce from Alexandria who have been dancing there since January. You can do it "slow slow slow" or "slow quick quick slow. It's what you feel." They have already been through the foxtrot and other basics. "He bought me a dance lesson as an anniversary present,” Lindsey says. "And now it's kind of like a date night sort of thing," Gregory adds.

Blinov pushes the gray button on the tape recorder. Argentinean tango music sets up the beat. Lindsey's hips sway slightly as she pivots her body and slides her foot up Gregory's leg. One ocho, second ocho (figure eight). Blinov advises, "Bring your feet and then your shoulders." Gregory says, "oh, I didn't transfer my weight," and Blinov tells him to do it again. "Excellent, yes, you did it."

Blinov and her husband own Dance Studio Lioudmila that they bought in May of 2002. Blinov's husband, Serguei, emigrated to America from Russia in 1992 "when things weren't very good there." Blinov says she followed in 1995 with their two children. "In Russia dancing was our hobby and we competed a lot. We loved it for fun. We both went to dance school and then private lessons." She explained in Russia they had both been professional doctors. "He was a neurologist, and I was a pediatrician."

But when they came to America "we need to survive and to find what we can do in America." So in the beginning she worked in some studios and found the Studio Dance Factory in Arlington where she taught as a part-time dance instructor. "Remember the sandwich," Blinov says. Gregory moves his left foot close to Lindsey who swings her foot next to his and he completes the step by placing his right foot parallel. "Every time when you do the sandwich … Now on to the cha cha." The music reverberates as a female voice sings "I can't believe it ...." Cha cha 1-2-3. Cha cha, man turn. Cha cha, lady turn. "Again with the music."

Blinov says most people who take private lessons come once a week. "But my husband when he is competing with a student in the Pro-Am (pro-amateur) competition may teach two or even four lessons a week because they need more practice."

Blinov starts with the basics like how to hold your body, the box, the waltz. "I teach them how to lead, special exercise. And the lady should always follow the gentleman. Even if he leads you wrong, just follow or it looks all wrong." She explains, "You get to one level and you want to get better. You watch others and want to do what they do. You know it's why we keep this business." And as you move up, the international samba and foxtrot are complicated, more disciplined than the American which is more comfortable for social dances.

People of all ages take dance lessons but she notices that younger people seem to take the cheaper group lessons. "I wish we had more young people, but they are busy with other things." If the group who comes has more women than men, the women are patient to wait their turn to practice with a man. But if there are more men, they get very frustrated and not patient at all. "I had an 86-year-old man who stopped coming last year because he was afraid to drive but not to dance. He did it all and sometimes I had to be sure I could catch him. He was great." On the other side she has a five-year-old girl and six-year-old boy who come 1-2 times a week. The boy is the grandson of the person at the front desk. "They are going to compete."

Lindsey has tucked up her dark hair and is concentrating. Blinov is lined up facing the floor-to- ceiling mirror with Gregory and Lindsey. "I'm going to teach you a new cha cha step to add to what you know. She holds Lindsey and guides her around the floor in a small circle, then Gregory. Cha cha, pivot into Gregory's arm. "We do this twice. Now put it all together. Ex-cell-ent."