Life after the coronavirus. 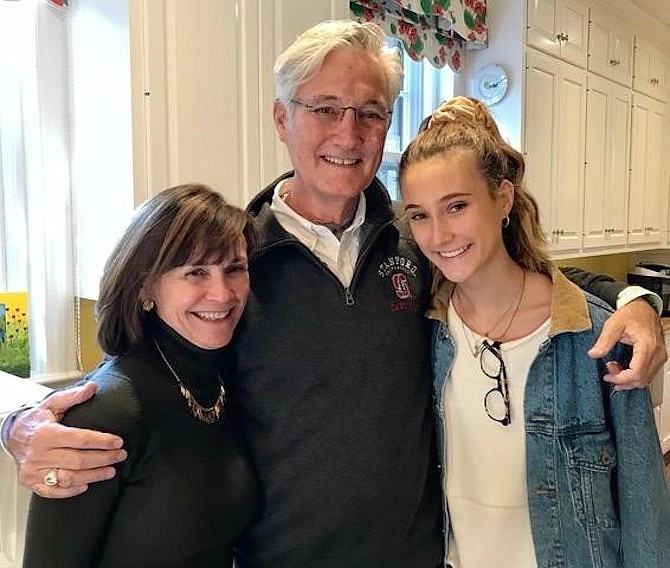 Gregg and Monica Murphy, along with 18-year-old daughter Ana, all tested positive for the coronavirus in early March. Photo contributed 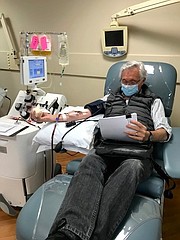 Local attorney Gregg Murphy was infected with the coronavirus, as was his wife and daughter. He has recovered and is seen donating plasma May 11 at Inova Alexandria Hospital. 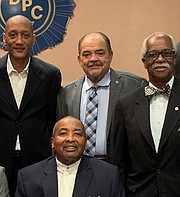 Nelson Greene Jr., back center, was treated at Alexandria Inova Hospital in late March for the coronavirus. He returned home and is now virus-free.

In early March, 18-year-old Ana Murphy came down with a sinus infection. But as her symptoms persisted, her parents, Gregg and Monica Murphy, both became ill. It was then that the family began to suspect that this was not a normal seasonal virus.

“We became concerned that it wasn’t just a sinus infection or cold that Ana was experiencing,” said Gregg Murphy. “By March 14 we self-quarantined, not knowing what we really had. As it turned out, the week before the schools shut down Ana had been sitting next to a classmate who was subsequently diagnosed as having had the coronavirus. But we knew none of this at the time.”

“During those three weeks, we had the typical flu-like indicators such as chills and body aches, followed by a slight fever,” said Gregg Murphy, who additionally had a persistent cough. “My fever started to spike over the cautionary limit of 101.4 degrees and Monica had sweats at night, while all three of us lost the sense of taste and smell and suffered from extreme fatigue.”

As Gregg Murphy’s blood pressure dropped, it was Ana who decided it was time to take action. On March 23, she drove her father to the Inova Alexandria Hospital emergency department for a COVID-19 test.

“With testing kits in short supply, I was first tested for the other viruses with similar, severe symptoms,” Gregg Murphy said. “When those proved negative, I was given the COVID-19 test, which involved inserting a swab into each nostril into the upper sinuses where the virus apparently hangs out.”

“Not a day goes by that we do not think about what could have been and how lucky we were.”

Gregg Murphy described the test as “the most excruciating 20 seconds of pain I could have imagined because it felt like a baseball bat with a Brillo pad on the end being driven through my nose into my brain.”

As he was sent home to await the results from the CDC, his symptoms began to subside. By the time his diagnosis was confirmed on April 3 – 11 days after his test – both he and Monica had recovered.

“I was in the hospital for about 7-8 days in isolation and on oxygen,” said Greene, whose wife Donita and family have not been infected. “It turned out my case was not that bad. I did not have the severe symptoms that others have experienced – no high temperatures or trouble breathing. I had some mucus and congestion, which is why I saw my doctor.”

Following his release from the hospital, Greene was instructed to quarantine at home for another 10 days.

“The people at the hospital were fantastic,” Greene said. “They kept me informed on everything they were doing. I’m impressed with the way they handled this situation and am very appreciative of how blessed I have been.”

After three weeks of being symptom-free and testing negative for the virus – a simpler, less painful test with results in 12 hours – Gregg Murphy returned to Inova Alexandria on May 11 to donate plasma in hopes of helping researchers develop a vaccine against COVID-19.

“I don’t want to over dramatize this experience, but I almost feel like there is a post-traumatic syndrome effect regarding the anxiety in all of this,” said Gregg Murphy. “What I have learned subsequently makes me look back in that rear-view mirror and realize that it was much more serious than we perceived at the time. Not a day goes by that we do not think about what could have been and how lucky we were.”

Despite being virus-free, the Murphy family continues to wear face masks to put others at ease.

“I believe that the only reason we were infected is because no one was yet suspecting we were vulnerable to the coronavirus and thus not taking the necessary precautions we now consider daily hygiene habits,” said Monica Murphy. “My hope is that everyone will take these precautionary measures seriously, and that as a responsible community, we will all be able to start a ‘new normal’ life.”

For 18-year-old Ana, her advice is much simpler: “Keep on top of your parents as they may be too stubborn to admit they have it.”