Major Crimes Detectives continue to investigate three shootings that have occurred over 36 hours on Nov. 10 and 11. To provide transparency to the community and to highlight the exhaustive work of officers, crime scene technicians, and detectives, FCPD has provided updates on the following cases:

Victim specialists from Major Crimes Bureau’s Victim Services Division have been assigned to ensure appropriate resources and assistance are provided.

Major Ed O’Carroll, Bureau Commander of Major Crimes stated, “All three of these cases remain under active investigation and our team of detectives are working extra hours to methodically examine evidence and interview all witnesses. I am deeply appreciative of all they have done on each of these important cases and the others they are assigned. The women and men of the Fairfax County Police Department work tirelessly to safeguard our community against any act of violence as we recognize how detrimental they are to the stability of our community.” 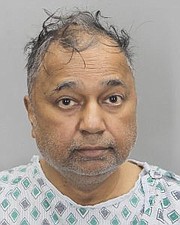 Detectives from our Major Crimes Bureau continue to investigate last week’s shooting at Sharpshooters Range in Lorton. Officers responded to 8194M Terminal Road on Nov. 11, just prior to 9 p.m. and discovered two men with gunshot wounds to their upper body. Both men were taken to the hospital, one with injuries that were life threatening. Varun Srivastav, 23, of Vienna, succumbed to his injuries at the hospital on Friday night. The Office of the Chief Medical Examiner ruled the death a homicide following an autopsy yesterday morning.

Detectives determined Varun’s father, Ajay Srivastav, 63, of Vienna, shot his son inside a car before shooting himself. Ajay was treated for non-life-threatening injuries and released from the hospital on Friday afternoon. Due to Ajay being released from the hospital prior to Varun’s death, he was charged with aggravated malicious wounding and firearm use in the commission of a felony. Detectives anticipate Ajay’s charges will be amended to reflect Varun’s passing.

Ajay is currently being held without bond at the Fairfax County Adult Detention Center. This remains an active investigation and detectives continue to examine evidence and interview witnesses.

Victim specialists from Major Crimes Bureau’s Victim Services Division have been assigned to ensure the family is receiving appropriate resources and assistance.

This is the 13th homicide year-to-date in Fairfax County.

Two 16-year-old boys from Annandale are facing charges following Tuesday night’s shooting at the Motel 6 in Springfield. Officers initially responded for a juvenile who was found suffering from an apparent gunshot wound to the upper body. Several other juveniles were determined to be in the motel room at the time of the shooting. Following a thorough investigation, detectives believe one of the boys was handling a firearm when he accidentally discharged a single round, causing fatal injuries to the victim.

Per Virginia Code 19.2-11.2, police are prohibited from providing information about juvenile victims unless parental consent is provided. It prohibits Virginia law enforcement agencies from directly or indirectly identifying deceased juvenile victims of a crime.