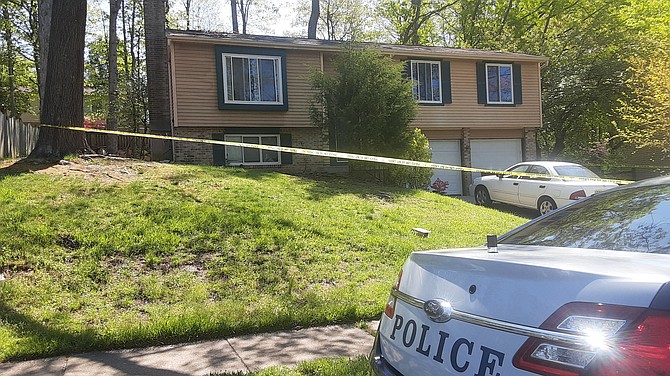 That following Monday, police were still at the scene in Springfield. Photo by Mike Salmon.

Fairfax County Police Department detectives are investigating a shooting on Sunday, April 25 that resulted in the deaths of two teenagers in the 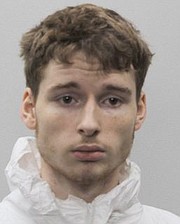 8000 block of Winding Way Court in Springfield. Officers responded to the report of a shooting around 3:18 p.m. where they found one juvenile victim inside the garage suffering from gunshot wounds to the upper body. Despite lifesaving measures by officers, the victim was pronounced deceased by rescue personnel. A second juvenile victim was found in front of a home nearby suffering from a gunshot wound to the upper body. He was taken to the hospital where he later succumbed to his injuries, police said.

An investigation revealed there was a previous argument through social media between the involved parties. As a result, four teenagers went to the home to talk to someone who lived there and investigators were told a fight broke out. During the fight, Zachary Burkard, 18, of Springfield, emerged from inside the home and shot two of the juveniles who arrived at the home. Burkard remained at the scene and was taken into custody by officers. A firearm was recovered at the scene.

According to the police, Burkard was charged with two counts of second-degree murder and two counts of using a firearm in the commission of a felony. The Office of the Chief Medical Examiner was expected to conduct the autopsies the following day.

Per Virginia Code 19.2-11.2, FCPD is prohibited from providing information about juvenile victims unless parental consent is provided. This law

Victim specialists from our Major Crimes Bureau’s Victim Services Division have been assigned to ensure the families are receiving appropriate resources and assistance.

This is an active investigation and detectives are continuing to examine evidence and interview witnesses to determine what led to the men’s death. Anyone with information is asked to contact the Fairfax County Police Department Major Crimes Bureau at 703-246-7800, option 2. Tips can also be submitted anonymously through Crime Solvers by phone – 1-866-411-TIPS (866-411-8477), by text – Type “FCCS” plus tip to 847411, and by web. Anonymous tipsters are eligible for cash rewards of $100 to $1,000 dollars if their information leads to an arrest.

These deaths are being investigated as the 5th and 6th homicides year to date in Fairfax County.