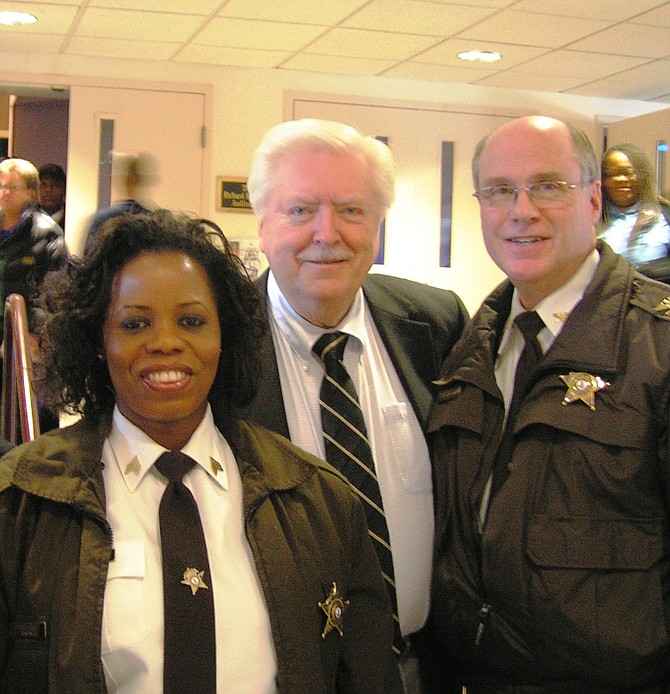 Harry Covert, left, is congratulated by Chief Judge Becky Moore on his retirement from the Alexandria Sheriff’s Office in January of 2012. 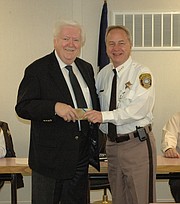 Harry Covert was a proud, born and bred Virginian. For many years, he called Alexandria his home and could be seen hanging around the courthouse in his role as a bail bondsman and later as the Public Information Officer for the Sheriff’s Office. On Nov. 7, Covert died at the age of 80 following a year-long battle with bladder cancer.

“Everyone at the Sheriff’s Office loved Harry,” said Sheriff Dana Lawhorne. “He was kind, generous and compassionate toward everyone he met. He was a true gentleman and had more friends than anyone I know.”

Born Jan. 6, 1940, in Newport News, Harry M. Covert Jr. was the eldest son of the late Harry M. Covert Sr. and Mary E. (Goodson) Covert. He was a 1957 graduate of Newport News High School and immediately began a career in journalism as a sports reporter for the Newport News Times-Herald. After a year he was named Sports Information Director for The College of William and Mary.

In subsequent years he covered sports for The Daily Press in Newport News and the Norfolk Virginian-Pilot. He became managing editor of the Petersburg Progress-Index in 1968, returning to The Daily Press in 1969 when he was appointed manager of its Hampton, Va., News Bureau. In 1972, Covert established and was publisher of The Hampton Monitor, a weekly newspaper.

Covert’s journalistic endeavors included establishing The Covert Letter, an international oriented commentary blog, in 2009. He was a columnist until 2019 for The Tentacle, a commentary site in Frederick, and a contributor to The Frederick News-Post and the Alexandria Gazette Packet.

“When Harry wrote for the Gazette Packet, he knew the best stories required understanding and appreciating people,” said former Gazette Packet editor-in-chief Steven Mauren. “He found pleasure in highlighting the little and large contributions of people who made Alexandria a better place to live in. He also had little patience for anyone seeking to gloss over the uglier realities of what crime does to a community. Yet, as a man of faith, he particularly enjoyed the stories of redemption, such as those prisoners in the city jail who made use of programs to try to change the course of their lives."

In 1975, Rev. Jerry Falwell appointed Covert as editor and publisher of Falwell’s The Moral Majority Report. He then was on the editorial staff of The Washington Times.

Covert was ordained by the Church of God in 1980 and was a frequent substitute celebrant at Grace Lutheran Church in Woodsboro, Md.

Covert established the nonprofit Harry Covert Ministries, through which he provided medical supplies to Haiti and other Caribbean and African countries. He directed airlifted food supplies to numerous African countries including the Sudan and Uganda and collaborated with Franklin Graham of Samaritan’s Purse and Larry Jones, founder of Feed the Children, in domestic and international mercy missions.

Covert was a director until 2016 of International Relief, Inc., a nonprofit organization headquartered in London and Amsterdam, coordinating relief missions to Third World countries.

In 1982, Covert established his bail bonds agency in Alexandria, and in 2006 he joined the Alexandria Sheriff’s Office as public information officer.

Among his affiliations, Covert was a member of the George Washington Chapter, Sons of the American Revolution in Alexandria, and a Kentucky Colonel.

Covert’s remains have been donated to the Maryland Anatomy Board for medical research and training objectives. A memorial will be held at a later date. In lieu of flowers, donations to Frederick Health Hospice may be made at https://www.frederickhealthhospice.org/.

“Harry was a prolific columnist,” said ABC News investigative reporter James Gordon Meek. “He was the epitome of a newsman and until the very end he never quit being a journalist.”