Pavilion Fenced Off as Site for SEEC Workers in Arlington
Votes

Pavilion Fenced Off as Site for SEEC Workers in Arlington 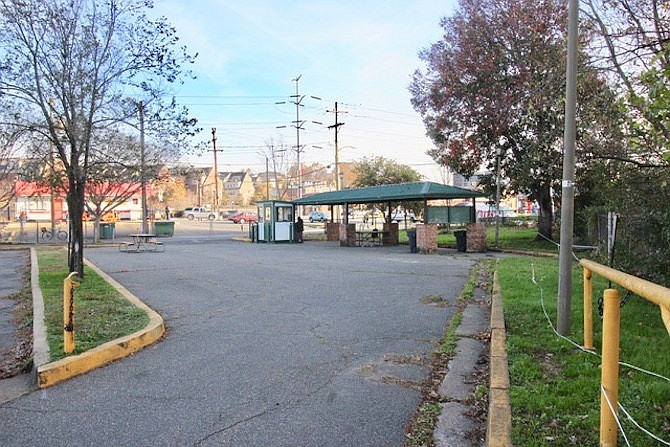 The pavilion on South 27th Street now sits empty after 20 years of serving as a meeting place for SEEC workers. Photo by Mark Charette

The pavilion on South 27th Street and Shirlington Road sits empty after 20 years of serving as a meeting place for Shirlington Employment and Education Center (SEEC) workers. It fell victim to the 4-Mile Run Redevelopment project.

SEEC was established in 2000 to match day laborers with employers who are in need of temporary labor. Originally it was funded by a Community Development Block Grant program, but for many years it has been funded by Arlington County. The program has provided more than 500 immigrant day laborers and local Green Valley residents with employment each year.

The SEEC workers signed in at the SEEC office on S. Nelson each day, and employers picked them up at the pavilion where skills were matched with needs. Work performed varied from construction to yard work, domestic services and handyman jobs. Prices were negotiated between worker and employer. The workers are almost all Hispanic immigrants, with half from Guatemala.

One of the purposes stated in the original bylaws was to “engage in such other activities as are in furtherance of or are related to the foregoing purposes.” As a result, the original program gradually grew to provide additional assistance to the workers such as warm coats and gloves, blankets, coffee at the site, bus tokens where necessary and Thanksgiving dinner paid for by fundraisers and donations from local Arlingtonians and other organizations. In addition, local churches began to cook enchiladas and chili or make bagged lunches to serve at the site several days a week to men waiting for jobs. One of the volunteers says, “it was the greatest compliment when one of them said it tasted just like home.”

As time went on Andres Tobar, Executive Director of SEEC, realized there was also a need to train Hispanic women for employment so he began a five-week course in 2012 to teach Hispanic immigrant women clean housecleaning techniques. The concept was to give the women an edge up on their competition by providing them the skills to clean using modern, environmentally sensitive products. Since the program began, approximately 250 women have been trained.

These classes were held on Saturday mornings with transportation and childcare provided. Tobar says, “The childcare allowed the women to attend.” Local churches and community organizations provided funding for the green housecleaning program. He says, “I can’t tell you how supportive the faith-based community has been through the years.” Tobar says the graduates of green housecleaning are available for hire through a SEEC database, and some of them went on to start their own housecleaning business.

Tobar saw the success of the green housecleaning program and got the idea to broaden the training to teach the women how to start their own businesses. In 2014 SEEC partnered with El Poder de Ser Mujer to provide training to 25 Latinas on how to start a business. The 5-week class included business development, marketing, financial management, “So far we have trained 330 overall.”

Tobar says they had one woman who was able to get employment at the White House and others at Washington Nationals stadium dealing with food. Others started their own cleaning companies. “What they wanted to know is what was involved. Some had already started a business but in the middle discovered they needed to know more about handling certain things like taxes or planning.”

The availability of SEEC jobs is seasonal in nature and can range, for example, from one worker hired the whole month of April with two in May after the pandemic hit. It has now gone back up to 108 in October but is expected to fall back down during the winter months. As a result of little income in the off months, many workers are in danger of losing their room or the couch they rent in a house so in 2016, in partnership with Arlington Thrive, SEEC began reaching out to provide rental assistance for the lean winter months. To date, 60 men have received rental assistance.

When the coronavirus restrictions were put in place, it hit the SEEC workers hard. Jobs dried up, but rent still came due. Tobar says, “The community stepped up and we were able to get several major grants for food and rental assistance. We were delighted with the tremendous response that we received to support the immigrant community. It is a continuation of twenty years of support from Arlington County to ensure the immigrant community was provided an opportunity in this country.”

In the future the program is expected to move to the Arlington Mills Community Center when it reopens after the coronavirus shutdown.