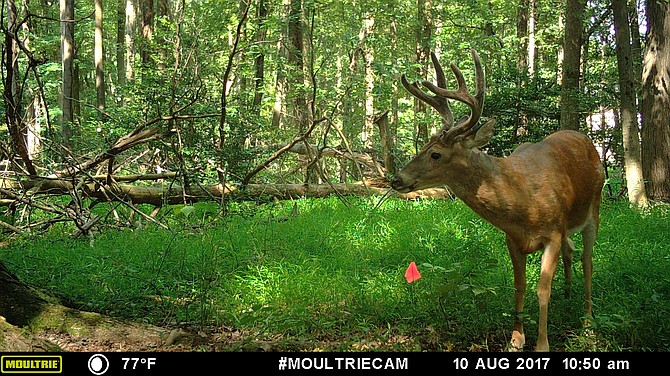 Imagine walking through wooded county park and all of a sudden, you see a person armed with a bow and arrow up on a stand in a tree. This

These orange signs are posted in areas where bow hunting might be taking place.

could happen as Fairfax County goes into their deer management season, allowing archery experts a chance to get a 10-point buck in the name of preserving the environment.

According to the county, the goal of the program is to manage local deer populations, and hunting is the preferred population management method, their material stated.

“The archery program has an exceptional safety record,” said Katherine Edwards, a Wildlife Management Specialist with the Fairfax County Police Department. “There have been zero safety incidents since the program was started.”

Ed Foster frequently walks past the orange signs at Accotink Stream in Springfield, which is one urban park that is part of the deer hunting program. “I have not seen anybody hunting or signs of any deer,” he said, although he was aware of the program. Another trail user did see some hunters in the past though. “They were up in a tree stand,” the man who chose not to give his name, said.

There is a map the deer management program follows that ranks the counties. They are categorized as counties that want to increase the amount of deer, stabilize existing numbers, or reduce the number of deer in each county. Fairfax is colored red on that map as a county that wants to reduce that number. The surrounding counties of Arlington, Prince William, Loudoun and Stafford are also looking to decrease the number of deer.

This program started in the county in 1998, citing safety concerns associated with deer like car accidents, health concerns and ecological damage. They also cite health concerns for the deer herd, and deer ticks that might spread Lyme Disease. Virginia is considered a “high risk” state for deer-vehicle collisions, and noted that the likelihood of a deer collision is one in 74. In 2019, there were 102 reportable deer-vehicle collisions in Fairfax County and seven resulted in vehicle occupant or driver injury.

Deer management is a challenging issue, especially in urban areas noted Edwards, and while there are people on both sides of the issue, some type of deer population management is necessary. “Some residents strongly oppose archery hunting or the killing of deer regardless of the method, others have expressed opposition to the archery program due to perceived safety concerns related to weapons use in the parks,” Edwards said.

The hunting is allowed in 100 parks and public land sites around Fairfax County and the parks remain fully open to the public. Last year was a big year for the program. In Huntley Meadows Park cluster, there were 98 deer killed, consisting of 70 doe and 28 bucks of various description – button buck (younger), and antlered and non-antlered. In the total 18 park clusters where the county program ran last year, there were a total of 868 deer killed, and most of them were does.

All archers must be in compliance with game licensing and general Hunter Safety Education requirements as specified by the Virginia Department of Wildlife Resources. All archers are required to pass qualifications with their bows to ensure their accuracy, marksmanship, and skill in shot placement prior to being accepted to the Fairfax County Deer Management Program. Additionally, the county requires that archers in the county program complete training above what is mandated by the state to include a course through the International Bowhunter Education Program, Edwards said.

All applicants also undergo a criminal background check and they must report any kills. The hunters must use stands, so they can’t just walk around seeking deer. “Hunting from the ground is strictly prohibited in any county park,” said Edwards. Stands are permitted no closer than 100 feet from park property line 50 feet from park trails.

Once a deer is killed, the hunter then makes an incision down the underside, and removes the organs. This is known as “field dressing the kill,” and the “deer must be moved from public view before field dressing,” county rules state. They can keep the deer meat, known as venison, for themselves, or donate it to charitable organizations such as Hunters for the Hungry that contribute to local food banks, Edwards noted.