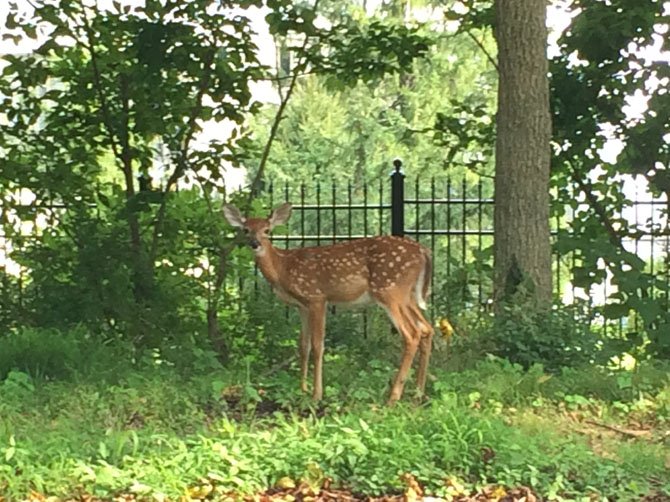 A high density of deer is seen as an ongoing threat to biodiversity and road safety throughout the Fairfax County. Photo contributed

Even at 72, the animated Disney classic “Bambi” can still soften the hardest hearts when it comes to appreciating the innocence and natural beauty of deer. But the reality in Fairfax County is that an unnaturally high density of Bambis and mothers of Bambi is an ongoing threat to biodiversity and road safety.

To cope with that reality, Fairfax County Police manage a robust population control program: an archery-hunting season now in its sixth year.

There are simply too many deer in wooded areas around the county — throughout parks, private residences and roadways. Ongoing population density surveys conducted by the Park Authority offer data from aerial infrared imaging as well as vegetation monitoring.

And according to the police department’s Animal Wildlife Specialist Dr Katherine Edwards, the most recent surveys “still indicate an overabundance of deer in the parks.”

The effects of this overcrowding are multifold, with the most immediately dangerous being increased vehicle collisions. Each year, the police estimate between 4,000 and 5,000 deer-vehicle strikes take place.

At the state level, Virginia ranked eighth in the country for collisions between 2007 and 2008.

It doesn’t help that the times of day deer are characteristically most active are morning and evening twilight — coinciding with northern Virginia rush hours.

Aside from the roadside threat, the overpopulation also increases potential human exposure to diseases carried by deer-riding pests such as Lyme disease. Then on an ecological level, deer crowding results in “overbrowsing”, or decimation of understory plant life that would otherwise offer food and shelter to other forest-dwelling animals, not to mention help regenerate the forest itself.

And many homeowners are familiar with the scourge of azaleas, daylilies and hostas.

In an attempt to put the deer population in check, the Board of Supervisors first approved archery as a preferred method in October 2000. It took several years for the program to fully develop, but by the end of fiscal year 2014 — the sixth year of the program’s current form — nearly 800 hunters were responsible for bringing in 848 deer across 27 park sites.

And though not popular with “Bambi” lovers, controlled hunting is the only population control method approved by the state.

“It’s the toolbox we have now,” said Edwards.

The archery is safe to park patrons and bystanders — only five injuries have occurred statewide in the last five decades, all to hunters — and despite the vegetation being slow to rebound, Edwards said the deer population is reducing.

By exactly how much is uncertain. And Edwards said her department is open to different methods that would be more effective, or as effective and more humane.

Such as the current study by White Buffalo Inc, which is operating under a special permit from the state to experiment with sterilizing deer rather than killing them.

“We hear both sides,” said Edwards. “It’s pretty balanced between the viewpoints. If there’s a new method, it gets a lot of attention — looking into these humane options in the future. That’s perfectly reasonable to question the methods we’re using and discuss the options.”

But for now, the police will continue to manage the archery program, because they believe it’s the best option at their disposal.