Gathering Hundreds of Ideas for Police Reform in Fairfax County

Chairman of the Board of Supervisors Public Safety Committee, Rodney Lusk (D-Lee) 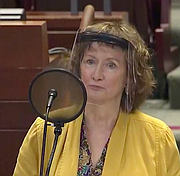 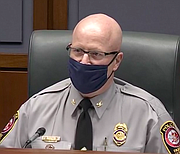 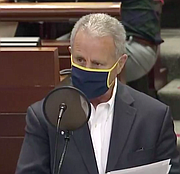 But Sayles was also a Black man.

One morning at 4:30 a.m. when he parked on a median to clear litter from the street, Sayles was confronted by a police officer who ticketed him and refused to hear what he was doing or why he was parked where he was.

“Randy was so incensed by receiving this ticket, so affronted by the treatment he received as a Black person by this police officer, that he took the matter up with the Chief [of Fairfax County Police Department] directly,” said Phil Niedzielski-Eichner, at a public input session hosted by the Board of Supervisors Public Safety Committee, chaired by Lee Supervisor Rodney Lusk last Wednesday, Sept. 30, 2020.

“A few of us warned at the time that it would be a mistake to declare, ‘Mission Accomplished.’” said Niedzielski-Eichner.

LAST WEDNESDAY, Sept. 30, Lee Supervisor Rodney Lusk, chairman of the Board of Supervisors’ Public Safety Committee, held a Community Input Session on Public Safety in Fairfax County. Lusk launched a new website in July designed to be a one-stop shop for all previous and future law enforcement data published by Fairfax County, and to make publicly accessible a matrix of all police reform recommendations, and questions submitted by community members.

“This site is a first step in fulfilling a personal commitment to increase law enforcement transparency and accountability by offering easy to find, clearly organized, and interactive data all in one place,” said Lusk. “Critical data remains unavailable, and much more community input is still needed.”

Lusk has received hundreds of suggestions from the community and his staff has compiled a matrix with the suggestions. Lusk has pledged that each person or organization that poses a question, suggestion, or idea will be addressed and answered.

“This year, the Public Safety Committee has been dealing with an unprecedented number of competing priorities,” said Lusk, at the beginning of the public safety input session. “As a result, there has been limited opportunity for community input during our formal committee meetings.”

“We are here to listen and to answer questions,” said Lusk.

BLACK PEOPLE are on the receiving end 45.63 percent of the time when Fairfax County Police use force, despite being 9.7 percent of the county’s population, according to the FCPD yearly report.

“This isn’t a problem from just this year. This has been consistent the last five years,” said Sean Perryman, president of the Fairfax County NAACP.

“We need to have a sense of urgency about this and we need to get serious about this because this is affecting everyday people’s lives,” said Perryman.

The Fairfax County Office of the Independent Police Auditor is “facilitating a study by the University of Texas at San Antonio and the University of Cincinnati to identify patterns and trends in FCPD uses of force during 2016-2018 with emphasis on racial, ethnic, gender, or similar disparities across subpopulations,” according the the Auditor’s webpage. The UTSA team will issue a public report on the study’s findings and recommendations and present it to the Board of Supervisors by early 2021.

“People who make up 46 percent of use of force will not care about a University of Texas study in San Antonio when they are beaten or subject to any kind of force that is used against them,” said Perrryman.

The Fairfax NAACP sent Lusk 45 recommendations for police reform, including ending the practice of having FCPD officers serve as school resource officers. Police in schools lead to what many consider a school-to-prison pipeline, criminalizing actions that should be handled as school discipline issues.

“The [Fairfax County Police] Department still struggles with transparency,” Niedzielski-Eichner said. “Residents deserve to know what police are doing and use of force incidents should be reported on a regular basis rather than waiting for the annual use of force report.”

Diane Burkley Alejandro, of ACLU’s People Power program, said that the county has used force much less since the 2015 Ad Hoc Commission..

“We saw less use of force ... against white people,” said Alejandro. Black people are still facing disproportionate and increased police use of force in Fairfax County, according to recent data.

While the overall number of arrests is declining, Black and Latino people are seven times and three times more likely to be arrested than White people, said Alejandro.

“What we are asking you to do, first and foremost, is admit there is a problem,” she said. “My main question [for leaders at the dais] … do you believe there is systematic racism in Fairfax?” She said if Fairfax County’s leaders could not admit that there is systemic racism here, it was unlikely that police officers would embrace the needed change.

Chief Edwin Roessler’s response: “We have a great department that is head and shoulders above everyone else in this country.”

JUST AFTER GEORGE FLOYD’s death, a Fairfax County police officer tased a Mount Vernon man, despite de-escalation strategies underway by other officers and the Fire and Rescue workers who were called to help the man in the midst of a mental health crisis.

What happened afterwards, Perryman said, was as disturbing as the video of the officer tasing the man. “When Chief Roessler did the right thing and held the officer accountable, many of his officers turned on him for it. That shows a problem in the culture in the Fairfax County Police Department.”

During last Wednesday’s hearing, Brenda Tillett of Bolster the Blue advocated for Roessler’s removal, saying morale is low among officers and distrust of their chief is high.

“They have to replace him with someone who does not hide but who stands boldly with them,” said Tillett. “How does an irrevocably broken relationship between the chief and his troops best serve the safety of our community?” she asked.

She was also critical of Fairfax Commonwealth Attorney Steve Descano, who charged the officer in the taser incident.

“He has created an environment where the officers are the hunted and he is the hunter. Our officers have admitted they are afraid to use force of any kind to keep themselves and others safe,” said Tillett.

Descano, who took office in December 2019, made a presentation to the Board of Supervisors’ Public Safety Committee on Sept. 22, explaining that his office is drastically under staffed given the workload it is facing. He asked for funding for more $19 million, 137 in additional staff to meet the need. The Board of Supervisors will provide $1.9 million from the carryover package towards the implementation of phases 2 and 3 of the body-worn camera program in FY2021. This includes a 40% increase to the Commonwealth's Attorney's budget with 15 new positions in their office to help with review of body camera footage, Chairman Jeff McKay said in an email to residents.

CHIEF PUBLIC DEFENDER Dawn Butorac appeared at the public input session to ask for a step towards equity.

The Office of the Public Defender handles 6,000-7,000 cases a year, roughly 75 percent of criminal charges in Fairfax, said Butorac. And 44 percent of her office’s clients are Black and roughly 40 percent of the jail population is Black, she said. “We are there to act as a check and balance to the system. We are there in court everyday challenging the arrests and searches and constitutional violations and general overreach by the police and prosecutions,” she said.

Everyday, her clients bring a focus on how the county is not working, how there are vulnerable populations suffering with mental illness, substance abuse issues, trauma, lack of economic opportunity and education, homelessness, and a myriad of other issues.

“The pay difference between my office and Mr. Descano’s is quite astronomical,” she said. “You have to ask why. Why should that be tolerated? Why should a prosecutor get paid more than a public defender?”

“I don’t know that I’m prepared to commit or answer your question directly. Certainly, we have studied this issue for the last year or so. And I’ll certainly commit to working with you and our Department of Management and Budget to continue to do the comparison studies, as well as I know there are ongoing efforts at the state level,” he said.

“A priority should be put to helping these individuals,” she said.

“This country is prioritizing prosecuting and locking up Black and brown people and that needs to end.”