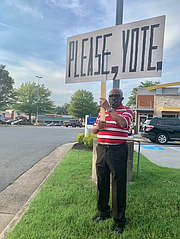 Mohammad Ali Salih at the intersection of Old Keene Mill and Lee Chapel Roads, in Burke.

Starting the first of the month, my occasional lonely voting vigil, that started on the Fourth of July, became daily, until, hopefully, the election day. I stand alone, hoisting over my head a large banner (4x2 feet) that said, on both sides, just two words: “PLEASE, VOTE.”

I stand at the intersection of Old Keene Mill and Lee Chapel Roads, in Burke, not far from our house for 40 years.

In 1980, when we bought the house, Burke was partly rural: there was a farmer who had cows and was selling fresh milk, and another who sold strawberries by leaving them on the side of the road, so people picked them, and left the money in a box.

Today, Burke is part of the nationwide electoral suburban middle ground between the more liberal cities and the more conservative rural regions.

And while a Pew phone survey showed that Democrats and leaning Democrats outnumber Republicans and leaning Republicans by about 7 percentage points, the latter group out-numbered the earlier in both voter registration and likely voters.

When my two daughters were helping me to make the sign, one of them asked whether I was actually encouraging more Republicans, than Democrats, to vote.

I replied that what concerned me was the overall low level of voting in the US. And particularly when compared to some other democracies.

The US Census Bureau said that, in the 2016 presidential election, 61 percent of the voting age population voted.

A Brookings Institute report said 50 percent of those between 18-29 voted in that election.

Since 55 percent of those young men and women voted for Hillary Clinton, as compared to 37 for Donald Trump, the report wondered what would have happened if more young people had voted.

All in all, Trump won by only 29 percent of the eligible voters.

Worldwide, there are about 22 countries where voting is compulsory, and in 11 of them the law was enforced. The United Nations Universal Declaration of Human Rights described voting as “duties to community.”

I believe that voting (i.e. choosing a country’s leaders) is as important as collecting taxes (i.e. financing a country), if not more important.

A recent report by the International Institute for Democracy and Electoral Assistance (IDEA) in Sweden said “parliamentary” elections turnout, as recent as 2018, was 57 percent in the US.

At the top was Australia, where voting was 92 percent; Belgium, 88 percent; and Denmark 85 percent.

Steven Mulroy, Law Professor at the University of Memphis, and author of the book, “Rethinking US. Election Law”, wrote last January: “In the past five years, restrictions on voting and voter registration purges have limited the number of Americans eligible to cast ballots.”

He added, “The U.S. is the only major democracy that still allows politicians to draw their own district lines, an often-criticized conflict of interest in which public officials essentially pick their voters, rather than the voters picking their officials.”

In Australia, all the citizens must register to vote. Not voting means a modest fine of about US$14. All voters can cast their ballots by mail, or vote in person before Election Day, and the elections are always on a Saturday, when most people don’t work.

On the Fourth of July, the first day I started my vigil, few cars honked in support, some drivers and passers-by gave me the thumb, few took pictures, and a young woman offered me a drink from the nearby MacDonald’s.

Because of the heat at that time, I didn’t stand many times, but, now, with the cool weather, I think I can do it daily, and also, during the evening rush hour, which, of course because of the Coronavirus, has been not much of a rush. Still, now I get more car honks.

I keep my silence, standing alone, avoiding eye contacts, and avoiding close contacts with other people, as they do the same with me, and everyone has a mask.

I feel that the Coronavirus is approaching me: I am almost 80 years old, have diabetes, high blood pressure, elevated cholesterol, had a recent heart stent surgery, Black, a little overweight, and live in Fairfax County, one of the highest virus-inflicted counties in Virginia.

But, thanks to the vigil; it has become an escape every time I feel bored because, out of fear, I almost confined myself to my house.

Mohammad Ali Salih is a full-time Washington, D.C. correspondent for Arabic publications in the Middle East since 1980,