Self response rate was 76.5 percent by mail, phone or on-line 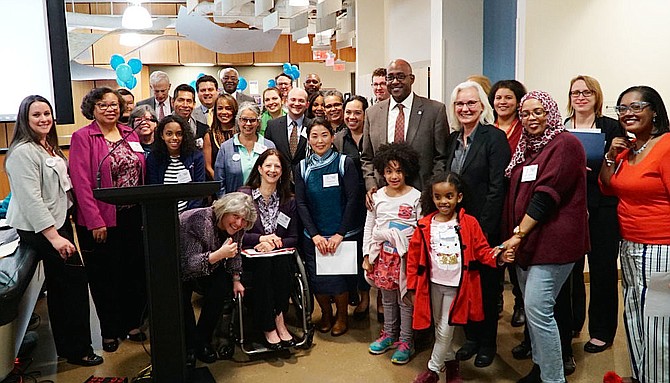 Arlington Complete Count Committee on MLK Day of Service in 2020, which included extensive community outreach about the 2020 Census. Photo contributed

Stand up and be counted, and Arlington did. Despite challenges posed by COVID, changing deadlines for participation, language barriers and suspicion of government, Arlington reported on Oct. 23 that as of Oct. 15 an estimated 99.98 percent of Arlington households had been counted in the 2020 Census. Census information is used to calculate distribution of state and Federal funding.

Bryna Helfer, Assistant County Manager and Director of Communications and Public Engagement, says the Complete Count Committee worked to educate, mobilize and energize Arlingtonians while the Census Bureau tracked participation with a roam map and signed people up who had not already self responded.

Helfer said they wanted to get the self-response rate as high as possible. “In the middle of COVID, about June, it hovered at 69 percent for three-four weeks. We were completely stuck.” She said, “We had to rethink our plan. Our self-response rate in 2010 was 74 percent. We knew we wanted to beat that. We wanted to be sure the Census Bureau was successful. We provided energy and translation.” In the end they were able to get 76.5 percent self response by mail, phone or on-line.

Helfer, with County demographer Elizabeth Hardy, were the lead county staff for the 42 member community team to assist the U.S. Census team effort. She explained the Complete Count Committee could encourage residents but not actually help them fill out the Census forms, which had to be done by the U.S. Census staff. “Our role was to educate, motivate and energize people to fill out the Census. We had to tell people the information is not tracked. There was a fear around citizenship.

“We built over 250 partners like PTAs, Civic Associations, Arlington Partnership for Affordable Housing properties, Rotary, Committee of 100.” She explained this was important because there can be a mistrust of government, and people are more likely to listen to people they trust. For instance, when the Census Bureau went door to door to get people to fill out the forms, sometimes they found the high-rise apartments were hard to get into. That’s where the County group was able to step in with the property manager to facilitate. “We worked as a team.”

The group kept track of the participation rate and put out a weekly newsletter. They ran social media campaigns and “did a ton of work” to set up Mobile Questionnaire Assistance (MQAs) pop-up sites each week around Arlington, led by Portia Clark. “She did an amazing job.”

Clark says they focused on areas with low response rates. Once they got going in July they sometimes had two-to-three pop-up sites a day and talked to 10,000 people in 14 weeks. “We would set up a table and tent and have promotional materials available. Sometimes we would buy someone a tamale or hand out baskets with cleaning supplies to get them to participate.”

They held the events outside and the volunteers wore masks and used hand sanitizer. She said they had difficulty with access to some grocery stores and the Salvation Army wouldn’t let them set up Census sites. “We had quite a few people who had been told not to take the Census.” Clark said they had never tried pop-up sites in the past, “and I think people were surprised at the success.”

Since Arlington residents speak a number of languages, they put up Census signs in Mongolian, Amharic, Spanish and Arabic in strategic locations. There are a lot of people who speak Mongolian, so they put extra signs there.

Helfer says League of Latin American Citizens (LULAC) helped to get information to the Hispanic Community, and a Bolivian personality on Facebook with thousands of viewers also helped reach that community. Outreach extended to the Ethiopian Center as well.

Flyers were inserted in the Arlington schools lunch distributions. “Kids can influence their families; they could champion the Census.” They reached low-income families at the Arlington Food Assistance Center (AFAC) grocery distribution sites. Thousands of door hangers were used in high-rise apartment buildings where residents were difficult to reach.

“We tried to leave no stone unturned.”

They encountered challenges along the way. Census efforts were in full gear with 54 events planned in a five-week period with their first Palooza event the first weekend in March. Then COVID hit and shut down everything.

“COVID was not expected. It was hard to energize people. We had to pivot on-line. But we said we have to give it all we got. We’re keeping the course until we can’t.”