‘A Great Place for the Courts and the County’ in Fairfax 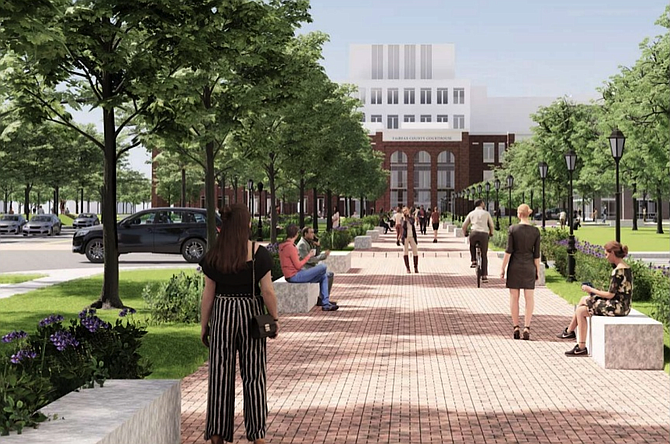 A ceremonial promenade will become a pedestrian gateway.

The new Building 1 (in white) will be adjacent to the existing courthouse.

(Click on "Download .PNG" to see large image.) An aerial view of the Judicial Complex shows the new buildings (in gray) in foreground, at right.

Paths and plazas will create a judicial mall linking the facilities and parking garages.

But big changes are coming, courtesy of the county’s master plan for the complex, which it recently unveiled during an online meeting. It involves five new buildings, including one dedicated to workforce housing.

“This is a 20-year process,” said Project Manager Joan Beacham, with the county’s Department of Public Works and Environmental Services. “And we’ve started a concept study for Building One.”

For 23 years, the Massey Building was the seat of Fairfax County Government until the current county Government Center opened in Fair Oaks. It then housed the Fire and Police departments’ administrative offices. But the nearly 50-year-old building’s asbestos made it a health hazard, so the 13-story structure was demolished, with site restoration completed in spring 2020.

That cleared the way for the project to proceed further; and during the meeting, Roger Weber, with SOM – which is creating this plan with the county – presented details of what’s proposed. And he said they’re nearing the end of the planning process.

“The land is bounded by Chain Bridge Road and Main Street,” he said. “There’s a lot of historic buildings on this complex, plus challenging conditions – for example, streets and traffic flow that could be improved. We started this process in June 2018 and now we’re finalizing the Master Plan.”

Weber said the changes will be done incrementally, over two decades. “We’ve reached out to the stakeholders and public as much as we could, and we’re excited about some of the ideas we got, along the way,” he said. “The Master Plan represents a synthesis of all those ideas.”

Some 1.4 million square feet of uses are on site now, but Weber said they’ll grow by about 2.1 million square feet in the future. And new programs added there will need more space, too. Most of the existing buildings will be preserved and enhanced, and new ones will join them. Three of the new buildings will provide more space for the existing ones. And some functions will be consolidated; for example, both fire and police evidence will be stored in one facility.

AMONG THE PROJECT’S GOALS are the creation of a welcoming and accessible complex, compatible with the surrounding community; sustaining a safe and secure judicial complex; and respecting the integrity of the on-site, historic resources. To do all that, said Weber, “We’d try to realign the roads to better serve the complex. We’d have more of a regular street grid, instead of a loop, like now.”

The judicial campus currently features 645,000 square feet of open space, and the same amount will be retained. However, explained Weber, “We’ll make sure it’s really usable and helps people circulate through the site. A navigable campus core and a pedestrian-friendly street grid will help orient people within the complex.”

The historic courthouse will be a focal point, in addition to a judicial core and a public area. And the overall complex will be more integrated with neighboring Fairfax City.

“The entrance off Chain Bridge Road will be moved to align with the planned extension of South Street in Old Town and will be better for pedestrians,” said Weber. “There’ll also be a modified, north-south entry from Main Street to the courthouse. The courthouse grounds will become a ceremonial, public park, and a new plaza will welcome people to the courthouse.”

Indeed, paths and plazas will create a judicial mall of linked, open spaces providing easy access between facilities and parking garages. Envisioned as a green, reflective area and gathering space, this mall will contain the historic courthouse grounds, courthouse plaza, upper and lower greens, a promenade and sidewalk additions/enhancements.

He said a ceremonial promenade will become a pedestrian gateway, and a central green will run east-west along the courthouse, connecting people between the buildings and the public parking garage. There’ll be multimodal accessibility via bikes, scooters and a ridesharing dropoff.

“The existing police parking lot by the Adult Detention Center [ADC] will go away,” said Weber. “Buildings 1, 2 and 3 will have underground parking, and we’ll add parking along some of the streets. And employees and the public could park in the existing, public-parking structure.”

OVERALL DEVELOPMENT would be done in phases.

“There’ll also be two daycares, plus other uses onsite, such as a coffee shop,” said Weber. “And all the buildings’ sizes and scales will be revisited over the next 20 years, as the needs arise and/or change. We want it to continue to be a great place for the courts and the county.”

Beacham said traffic studies will also be done. “The two entryways into the courthouse campus will each have two lanes in each direction, plus on-street parking,” she said. “And having a second entrance off Main Street will alleviate some of the bottleneck that happens there now.”

“Nonprofits will be moved from their current locations into Building 1,” she continued. “And 200-250 workforce housing units will be built for those in middle-income brackets – teachers, public servants, firefighters, etc.”

Beacham said they’ll preserve the exterior of the historic courthouse and replace its antiquated interior systems. And the Legato School will stay onsite but moved to the corner of West Street. “At this time, we don’t have a user identified for Building 3,” she added. “But it could be a public/private partnership.”