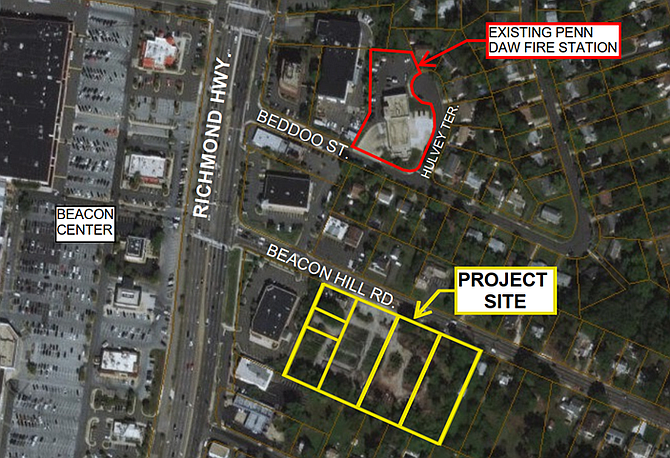 This map shows the location of the present fire station and the new location they are considering.

The existing Penn Daw Fire Station dates back to 1967 when the pace of life was a little slower along this section of Richmond Highway. But fast

Hybla Valley Nursery is closed and the county is looking at the site for a fire station and affordable housing.

forward 54 years, and it’s time to upgrade to a new station to meet the demand. A block away, the Hybla Valley Nursery recently closed, and the piece of property is big enough to accommodate a new station and affordable housing, so the wheels are in motion to co-locate the station and housing at this location on Beacon Hill.

According to the county, the new location on Beacon Hill Road allows first responders direct access to emergencies in the community and eliminates the need for construction of a temporary fire station. Due to the size of the property and ideal location along Route 1, an opportunity was realized to co-locate additional facilities, it said on the county website.

Mount Vernon Supervisor Dan Storck (D) set up an advisory committee which looked at the situation last fall, and saw the opportunity to relocate the Eleanor Kennedy Shelter, which is in an old pumphouse building on Fort Belvoir land across from the Town of Accotink.

“Co-locating services at the site and providing supportive housing in a new, modern facility aligns with county strategies to prevent and end homelessness in the Fairfax-Falls Church community,” according to Fairfax County documents.

The advisory committee met over the last few months, and now they are ready to hold public meetings to present the plan, get suggestions and make changes before finalizing it.

Mary Paden, Chair of the South County Task Force, cited the needs for a new shelter. The new housing must be along a main transit route so residents can get to jobs and services, and that it be constructed as a modern facility recognizing the need for resident care and space. It must also open as soon as possible, the task force criteria stated.

According to Paden, the vacant nursery site fits those criteria. “We think this site could support buildings even higher than four stories to accommodate more affordable housing,” she wrote.

This shelter should include at least 20 units of permanent supportive housing, with medical respite beds, a kitchen, laundry, community rooms, outdoor terrace, and other essentials of a modern shelter, similar to the existing, relatively new Bailey’s Shelter and Supportive Housing Facility in Falls Church. The site should also include at least 30-50 units of affordable housing units as recommended by the department of Housing and Community Development.

The surrounding neighborhood was used to being next to a plant nursery, and could push back against the plan. The task force recommends

Telephone Dial-In Information for either meeting:

allowing community use of the community room at the fire station. They would also form an “ongoing neighborhood advisory council as at other shelters to deal with any issues between the shelter and neighborhood,” the task force stated.

A few doors down, Carl Sudar heard about the affordable housing from a flyer that was dropped off. Across from his house there is a county-run group house, and another county housing project is not what he envisioned for the land, so he isn’t too happy. “Obviously it will be a detriment to the area,” Sudar said. He looked at the process the county uses to introduce something like that to a neighborhood. “Seems like they already decided to build it without an approval process,” he said.

Next door to the closed nursery, Denise Annan is a renter that got the flyer as well. She saw the homeowners in the area talking about it when the flyers came out. “I know they were upset,” she said.

To begin the discussion, the county is also hosting virtual community meetings, with the first one scheduled for April 24. Links can be accessed off Supervisor Storck’s webpage and Facebook page.