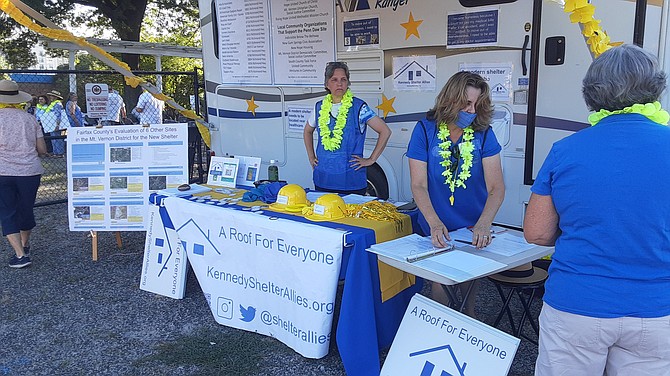 At the shelter meeting in Hybla Valley, leis were handed out by one group, and by the end of the night, the discussion continued about the future of the former Hybla Valley Nursery land which is now owned by Fairfax County. Photo by Mike Salmon.

The crowd at Tuesday nights’ Penn Daw Fire and Supportive Housing Advisory Community Meeting was a mixture of Mount Vernon district residents on both sides of the aisle. The supporters were predominantly from the Kennedy Shelter Allies group, and they had an RV as a mobile headquarters, blue shirts and leis.

The anti-shelter group was a little more incognito, but there were a few signs and voices that came out of the crowd at certain times.

There were all kinds of opinions flying around at the shelter meeting in Hybla Valley.

Mount Vernon Supervisor Dan Storck chaired the meeting, making sure questions were addressed, and reiterated that his position was not on one side or the other.

“I can commit to listening,” he said. The meeting continued on land that was once home to flowers and plants, and is now committed to at least a fire station and maybe a homeless shelter and some affordable housing. 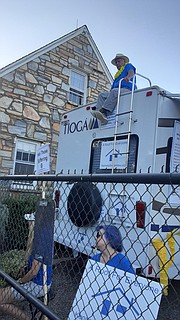 He needed a better view of the speeches.

Early on, Storck set up an advisory committee which looked at the situation last fall, and saw the opportunity to relocate the Eleanor Kennedy Shelter, which is in an old pump house building on Fort Belvoir land across from the Town of Accotink.

“Co-locating services at the site and providing supportive housing in a new, modern facility aligns with county strategies to prevent and end homelessness in the Fairfax-Falls Church community,” the advisory committee said on the Fairfax County website.

The Kennedy Shelter Allies cited the needs for a new shelter, and handed out literature reiterating their stance. The group is a “coalition of 10 local faith communities, nonprofits, and advocacy groups,” the release stated. They expected people from both sides of the issue to attend, and have collected “17 signatures from local businesses on a pro-shelter petition.” The list was taped to the outer side of the RV for all to see.

The new housing must be along a main transit route so residents can get to jobs and services, and it must be constructed as a modern facility recognizing the need for resident care and space. It must also open as soon as possible, the task force criteria stated. This was reiterated to the crowd for one reason they couldn’t renovate the existing shelter.

This shelter should include at least 20 units of permanent supportive housing, with medical respite beds, a kitchen, laundry, community rooms, outdoor terrace, and other essentials of a modern homeless shelter. The site should also include at least 30-50 units of affordable housing units as recommended by the department of Housing and Community Development.

Each speaker then got up with a series of questions from the audience, and it was systematically handled by Storck’s office so every question was answered. Topics of the questions included fears of crime and property damage from shelter residents; why locate near existing families; and why not make it a plot of trees? Since the county purchased the land for a purpose, the trees were out of the question. “The county has a need for other services,” Storck said.

One question that popped up from the opponents of the shelter and affordable housing was how it impacted their property values. The response 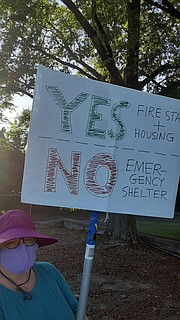 There were opinions on both sides of the issue.

from the officials cited evidence that was “inconclusive,” they said. This was reiterated a few times.

Kevin Knappmiller, a nearby resident, said the question that he submitted on a card asked for a show of hands of those who oppose the colocation was never addressed. “We’re about 800 feet away, they’re not answering the people who it would impact,” he said.

Some questioned the need to put it at this location when there are other shelters, they claimed, in Mount Vernon. On one of the presentation slides from an earlier meeting, it listed all the shelters and supportive housing locations around the county, and the Mount Vernon District only has one — the Eleanor Kennedy Shelter with 50 beds. The Mason District has the most with three; Lee District and Springfield District have two each. The Lee District locations are along Richmond Highway and close to the Mount Vernon District.

Other locations that were looked at for the shelter, fire station and housing included nine places along Richmond Highway, some of which were "not for sale," or "not available," and one in Lorton was an "undesired location due to proximity to Elementary School."

If all pans out with the three county amenities, they will be ready in five years, officials said.