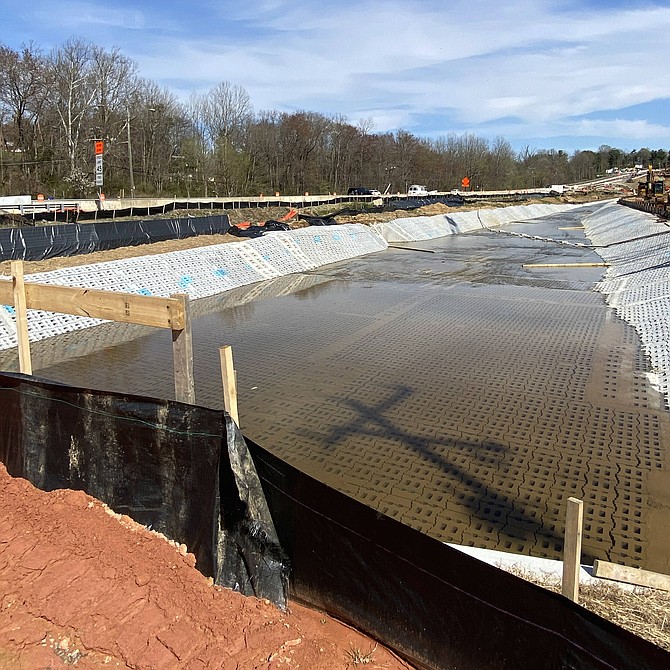 Colvin Run as an articulated concrete block channel with the addition of staggered weirs, wooden boards to dissipate the water velocity. Photo by Mercia Hobson. 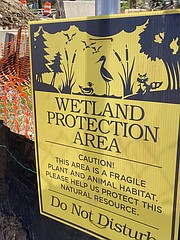 The Wetland Sign is installed on the banks of Colvin Run in Vienna. A new articulated block channel (ABC) that VDOT reported is approximately 1,200 feet in linear length replaces a straight channel section along the south side of Route 7 installed in the late 1960s.

Fairfax County Supervisor Walter Alcorn (D-Hunter Mill District) presented a Joint Board Matter with Supervisor John W. Foust (D-Dranesville District) on Tuesday, April 13. The matter concerned a process review of the Route 7 infrastructure project and the environmental impacts by concrete channeling of Colvin Run as it empties into Difficult Run.

“This result is not good for Colvin Run; not good for Difficult Run, nor is it consistent with the best stream management and restoration techniques developed and implemented in dozens of locations around the county,” Alcorn said.

The Board voted unanimously to direct County staff to review the environmental processes undertaken in the Rt. 7 widening project.  According to the Joint Board Matter, the staff is to “recommend changes in county, state, and/or federal processes to achieve a more balanced and holistic approach toward minimizing the overall environmental impact on similarly scaled and situated infrastructure projects. Such recommendations could include proposed changes in state or federal law in the Board’s legislative program.”

“Unfortunately, inspired by a group of local residents and (as reported) in a Connection Newspapers article, the final outcome is not a good one for Colvin Run where it empties into Difficult Run…In the name of protecting wetlands, the U.S. Army Corps of Engineers approved the one option that was probably the worst option for the stream – putting Colvin Run into a concrete channel,” said Alcorn.

JOINTLY with Supervisor Foust, Alcorn put forth the motion that (County) staff review the environmental processes undertaken in the Route 7 Widening Project that resulted in the concrete channeling of Colvin Run. Chairman Jeffrey C. McKay opened the meeting for discussion. Seeing and hearing none, the ten-member Board voted and unanimously approved the motion.

One of the earliest documents VDOT provided was the Nov. 2017 Revised Environmental Assessment of Aquatic Biology. It rated the potential environmental impact between a No-Build Alternative and Build Alternative for Colvin Run, Piney Run, and Difficult Run. The Fairfax County, Stream Protection Baseline Study, was identified as the best available data source relevant to the Study Area. Three monitoring stations were located within or close to the Study Area (Colvin Run, Piney Run, and Difficult Run).

According to reported findings, the Build Alternative would result in “minimal impacts” from loss of stream channel, temporary construction impacts, and road operation. The effects would be offset mainly by implementing best management practices and stabilizing Colvin Run.

On Aug. 26, 2019, the Virginia Department of Environmental Quality issued a public notice. The public meeting was not held based on the low number of comments received during the 30-day notice, according to documents provided by VDOT.

ERIC KNUDSEN, a former member of the Rt. 7 Working Group, said he and Tim Thompson, president of the Carpers Farm Homeowners Association in Vienna, which is adjacent to Colvin Run, traveled to Fort Monroe on Tuesday, Sept. 24, 2019, to testify at a hearing of Virginia Marine Resources Commission. Knudsen said they testified about the concrete block channelization of Colvin Run and its sediment flow to Difficult Run as part of the Route 7 Improvements Project between Colvin Run Road and Jarret Valley Drive in Fairfax County.  He and Thompson detailed the environmental consequences of channelizing Colvin Run to manage stormwater and funneling it into Difficult Run. He said they voiced opposition to “Option 10-C”, a rip rap channel such as concrete blocks and not a best practice. Knudson said the Army Corp of Engineers did not term the area a “floodplain” but instead a “stable forest.”

“I was arguing that it was a cow pasture, a floodplain that allowed the water to expand and not be funneled into Difficult Run. What they were doing was creating a funnel that would create more turbulence. The fact was that a meandering stream through a floodplain was a whole lot more environmentally safe than a channel into another stream,” said Knudsen. He said they voiced recommendations for three other options. Those were 1, 2, and 3, using stormwater best practices such as meandering streams with shallow pools.

Knudsen said they brought letters in opposition to the proposed plan from Fairfax County addressed to Robert Berg at the Army Corps of Engineers and from Great Falls Citizens Association signed by William Canis. The letters cited the problems 10-C would cause for Difficult Run, which could negatively impact nearby wetlands. According to Knudsen, those on the Virginia Marine Resources Commission told them the letters could not be entered as testimony.

On July 9, 2020, the Route 7 Working Group held Meeting No. 23. Minutes of the meeting described a Route 7 Project Update for the Colvin Run stream relocation. As part of the update, documents showed a page of proposed “enhanced design elements” along the articulated concrete block channel,  the addition of staggered weirs, wooden boards to dissipate the water velocity.

On Friday, April 16, 2021, Leonard provided VDOT’s project overview and update. She said in an email that the foundation of the new stream channel at the approach to Difficult Run is constructed of hollow articulated concrete blocks (ACBs). Those blocks would guard against ongoing erosion and allow, over time as soil was deposited into the vertical cores and spaces in the blocks for vegetation to develop by the water running through the channel.

The Connection has not heard back from other individuals and groups after requests for comments as of press time.  The Connection will publish these as we receive them.