Waynewood Baby Delivered in the Family Van in the Driveway
Votes

Waynewood Baby Delivered in the Family Van in the Driveway

A concoction, a last-minute text and quick thinking were part of baby James’ arrival. 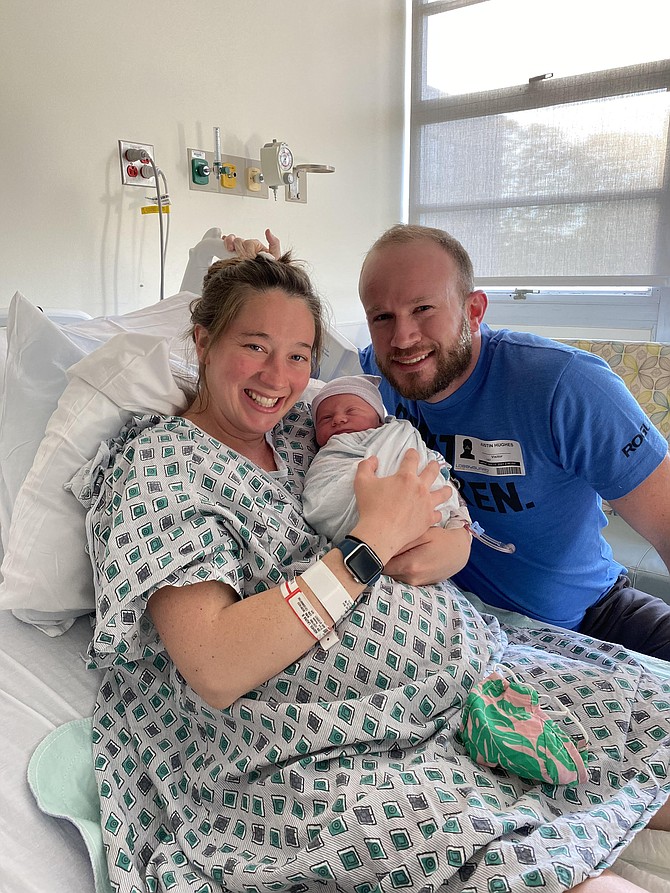 A neighbor's doorbell video captured some of the driveway event.

unforgettable. Justin Hughes’ pregnant wife Laura went into labor and ended up giving birth to their son in the back seat of their Honda Odyssey van that Justin pulled back into their driveway when they realized they weren’t going to make it to the hospital in time. It’s a tale for the family lore.

“By the time I ran around to open the door, the baby was out,” Hughes said, “I’m just kind of in shock.”

It all started when the baby was late, past the due date, and Laura Hughes was talking with friends who told her about a method they used to speed things up, a so-called “midwives concoction.” It contained Castor oil, almond butter, lemon verbena and a few other ingredients. Laura drank this concoction that morning around 10:15 and things started happening right when Justin got home for lunch around noon.

“My wife texted me from the bathroom,” he said.

They both got into the van and started heading to the hospital, and Justin called the midwife and told her they were on the way. There was no sense of urgency from the hospital, so Justin concentrated on driving. After all, Laura was in labor for hours with their other children so they thought this would be more of the same. A couple of streets away from their house, the baby started coming and there was no way they’d get to the hospital so they headed back to the house, pulling into the driveway just before 2 p.m., and called 911. That’s when baby James made his appearance. Justin had brought along a lot of towels in the van just in case, and it turned out to be a good move. Justin recalled that precious few minutes in the van:

“It took me a minute to get a grasp on him because he was slippery, I was able to pull him up after Laura moved out of the way a little bit. I got the cord off of his neck and wrapped him in a towel and Laura held him in a towel up against her chest. The umbilical cord was still attached to James and to the placenta which was still inside and hadn’t been delivered.”

Baby James was breathing and crying, and his color looked good so Justin was relieved.

The ambulance pulled up, and all the neighbors were looking on when Justin gave everyone the thumbs up and yelled out “It’s a boy.” Minutes later, the ambulance pulled away, and Justin followed behind in the van, but it all turned out for the best — James and Laura are doing fine.

These days, a story like this has got to have some video and this was no exception. A neighbor caught certain parts on the Ring doorbell, which Justin called “a funny, candid moment,” he said.

Everyone was thankful that the birth of their third child was successful but in the end, “I don’t want to do it again but everything worked out,” Justin said.