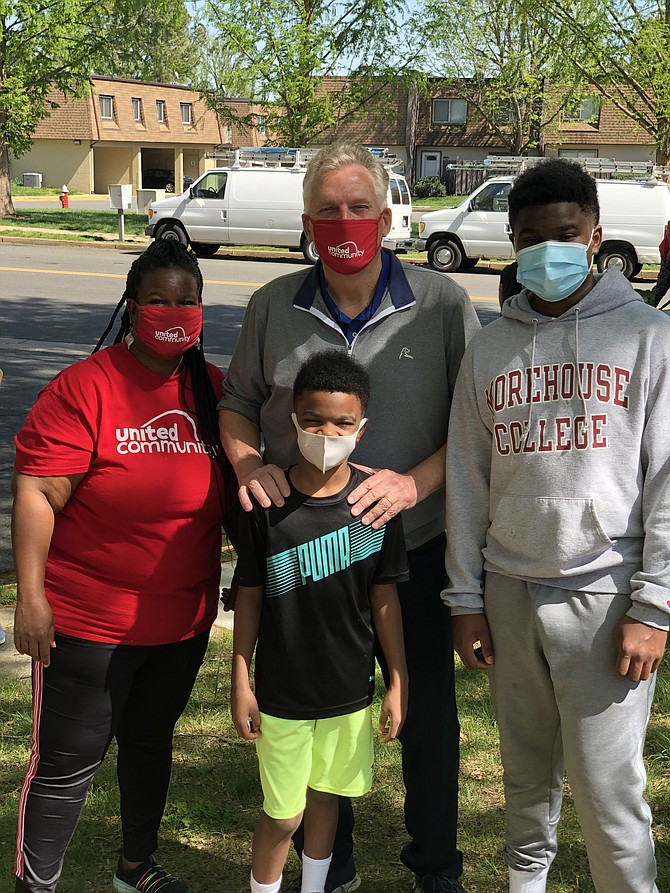 “For too many Virginians, food insecurity still affects all aspects of life,” Terry McAuliffe said. “We’ve got to do more to help them rebuild their lives – starting with distributions like this one.”

Together with United Community’s Neighborhood Ambassadors, Terry McAuliffe helped distribute a truck-full of fresh produce, shelf-stable food, diapers, and much-needed hygiene products to families – some of whom had stood waiting in line for more than an hour.

“The Janna Lee census tract has the highest poverty rate in Fairfax County – one in five families lives in poverty,” United Community President & CEO Alison DeCourcey said. “Since the COVID crisis began, United Community focused its efforts on preventing a hunger crisis in the middle of a public health crisis.”

The residents of Janna Lee face many obstacles. The neighborhood sits in a federally-designated Food Desert, as well as a Food Swamp. More than 80% of families rely on free or reduced lunch to feed their children. Eviction rates are 2-3 times higher than the County average. More unsettling, those who live here have a lifespan 10 years less than the average Fairfax County citizen.

As Virginia’s 72nd Governor and First Lady, Terry and Dorothy McAuliffe made ending childhood hunger a key priority of the administration. As a result of increased funding and the administration’s partnership with No Kid Hungry, nearly 13 million more school meals were served per year in Virginia. But there is so much more work to be done here in Fairfax and across the Commonwealth.

A long-time Janna Lee resident, Earl-Thompson first started this distribution in March of 2020, distributing food to about 20 people a week from her front door. Today she heads the Communities of Opportunity initiative with the help of over 20 volunteers and Neighborhood Ambassadors. The new initiative has empowered hundreds of residents, placing them at the center of relief efforts.

“As community members, we have the power, privilege and proximity to do something now,” Earl-Thompson said. “We are committed to getting things done and being the change we want to see in our community.”

United Community provides wrap-around programs and services that support children, youth, and families in southeastern Fairfax County. Families in need are encouraged to visit www.unitedcommunity.org for food pantry hours and other available resources.