The Heat is On
Votes 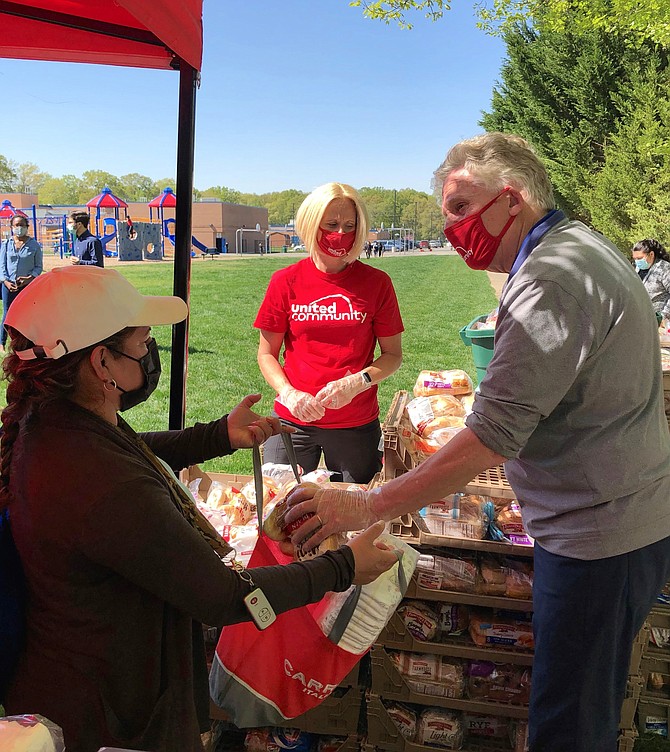 Pete Snyder, left, talks with supporter Vic Matus during a campaign event at Blackwall Hitch Restaurant March 27 in Alexandria. Snyder is running for the Republican nomination for Virginia governor. The GOP convention is May 8.

Jennifer McClellan, right, with a supporter at a campaign event April 15 at fibre space in Old Town. McClellan is vying for the Democratic nomination for Virginia governor. Primary Election Day is June 8; early voting begins next week. 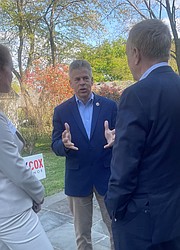 Former governor Terry McAuliffe has made several stops in the region, including a visit April 20 to Mount Vernon Woods Elementary School during a United Community COVID relief food distribution event.

McClellan was in Alexandria for an April 15 campaign stop at Old Town’s fibre space yarn shop to launch her “Women for McClellan” initiative.

“Virginia has the worst record of elected women to office and it’s time to change that,” said McClellan, who is vice chair of the Virginia Legislative Black Caucus. “As we are facing a health pandemic, economic crisis, reckoning of racial injustice and a growing loss of faith that people have in government, I am running to rebuild our economy, our health care and our economic safety net in a way that restores that trust and leaves no Virginian behind.”

“One party control in Richmond is tearing our state apart,” said Cox, who attended an April 15 campaign event at the Alexandria home of Frank Fannon. “No one would be faulted for feeling anxious or pessimistic about the future. I want to see problems solved through dialog and communication, not with destruction and chaos in our streets.”

Snyder is an entrepreneur best known as the founder of New Media Strategies and more recently the angel investor firm Disruptor Capital. Though he ran unsuccessfully in the Republican Primary for Lieutenant Governor in 2013, he is not shy about his goals in this election.

“I want to change the balance of power in the General Assembly,” said Snyder during a March 27 event at Blackwall Hitch Restaurant on the waterfront. “I want to see Republicans in charge.”

On early voting in Alexandria: https://www.alexandriava.gov/elections/info/default.aspx?id=1720