Snakeheads Are Thriving in Area Waters

Snakeheads taste like a tender pork chop, some say. 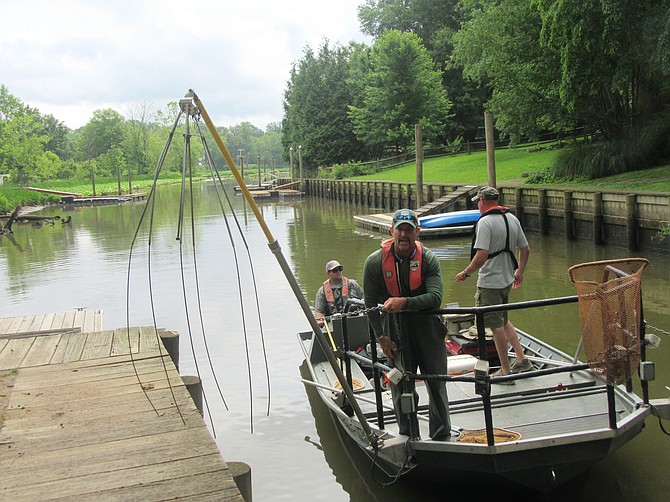 John Odenkirk and team at the Wessynton community dock. Photo by Glenda Booth

The electrofishing device, a boom and anode array used on Little Hunting Creek and other waterways. The Potomac River is in the background.

They lurk in the murky, sluggish shallows, their elongated bodies and splotchy, brown skin camouflaged in the shoreline’s woody detritus and dense vegetation. With gaping mouths and sharp, canine-type teeth, they snatch and devour any unsuspecting prey that happens by. They are invasive northern snakehead fish (Channa argus). They hit hard and fight hard, say anglers who relish the challenge. Think of a writhing snake up to 35 inches long on the end of your fishing line.

Virginia ichthyologist John Odenkirk and his Virginia Department of Wildlife Resources team are probing Potomac River tributaries -- Little Hunting Creek, Dogue Creek, Aquia Creek and Pohick Creek -- and Belmont Bay and Gunston Cove, to get snakehead population estimates, sampling research he began in 2004. His team buzzes around in a 17-foot aluminum jon boat and "electrofishes" with a metal, spider-like device that dangles off the bow and shoots pulses into the water.

The electrical current temporarily stuns all fish within six-to-eight feet, which causes the exposed fish to float around aimlessly for about 20 seconds. Then the team scoops up the snakeheads with a net, not always effortlessly.

"The snakehead is the hardest fish to shock,” Odenkirk explains. They are strong and belligerent and they recover quickly.

The team attaches tags to some in hopes of eventually recapturing tagged fish to collect data on the fish’s lifespan, migration, growth, spawning success and diet.

Odenkirk records his catch rate, number of fish caught per hour of electrofishing. In Little Hunting Creek, the catch rate peaked in 2012 and 2013 when he caught 11.5 an hour. It’s been declining since and this year, they are catching six snakeheads an hour there. This catch rate is typical of other area waterways as well, he says. But while the catch rate may have dropped since 2013, snakeheads are here “for the foreseeable future,” he says.

Snakeheads have made it as far inland as Huntley Meadows Park. Snakeheads and other fish travel up and down the streams that connect to the Potomac River. Karen Sheffield, the park’s manager, says that occasionally, people want to fish in the park, but she stresses that fishing is not allowed there. “Touching, capturing and removing species from the park is prohibited,” she says.

The snakehead’s super-aggressive reputation has attracted eager anglers from as far away as England, Japan and Africa, says Mount Vernon resident Steve Chaconas who runs National Bass Guide Service. “I see snakeheads quite frequently,” he says, “but catching them is a different story as angling skills need to be up to the challenge. They put up a fierce fight.”

How Did They Get Here?

It’s unclear how northern snakeheads got to metropolitan Washington-area waters, but experts speculate that aquarists may have released them when the fish outgrew home tanks, or someone may have intentionally introduced them for food. They have a muscular texture, don’t flake and taste like a tender pork chop, some say.

The first, widely-reported snakehead surfaced in the news in 2002 when one was found in a Crofton, Md., pond. Tall tales viralized across the media, hyperbolic reports claiming that the fish could attack people, eat pets and walk on land. These exaggerated claims led to nicknames like “Frankenfish” and "Fishzilla."

Northern Snakeheads were discovered in Virginia in 2004 and can be found in the Potomac River almost anywhere, according to the Virginia Department of Wildlife Resources, from above Great Falls downstream to Chesapeake Bay.

Because they can survive in both fresh and saltwater and tolerate polluted, poorly oxygenated water, they have a competitive advantage over many other fish. Females can lay 30,000 to 50,000 eggs.

Snakeheads are opportunistic, voracious eaters. Odenkirk has found 16 fish species, crayfish and frogs in their stomachs. "They'll even eat their own young," he says. "If it’s hungry, it will eat it.”

The current world record for a snakehead caught was a snakehead shot with a bow and arrow in 2018 in a Potomac tributary, Mattawoman Creek, in Charles County, Md. It was 35 inches long and weighed 19.9 pounds.

When snakeheads were first discovered in area waters, some worried that they might adversely affect the Potomac’s renowned large-mouth bass fishery because snakeheads and this bass species have the same prey base at certain times of the year. But Odenkirk has not confirmed any negative impacts on large-mouth bass from his 20 years of data for the Potomac and Rappahannock Rivers.

Snakeheads find banded killifish a favored prey. George Mason University data show an increase in banded killifish after the snakeheads arrived, so Odenkirk has concluded that snakeheads’ impact on the fish he’s studied is not significant. He is not aware of studies of snakehead impact on amphibian or invertebrate populations, such as frogs, crayfish and aquatic insects.

Snakeheads will expand their range and colonize new waters on their own and through human intervention, Odenkirk predicts. They will be all over the U.S. eventually, he says. Their population numbers seem to peak and then decline and stabilize. “That’s what’s happening in the Mount Vernon area because they are expanding their range,” he explains.

“They are here to stay.”

If you catch a snakehead and want to possess it, kill it (by removing the head, gutting it or separating the gill arches from the body), and contact the Department of Wildlife Resources at 804-367-2925. It is illegal to own a live northern snakehead in Virginia without a permit. Visit https://dwr.virginia.gov/fishing/snakehead/.