High School Football and Other School Sports Start Soon, Masks and All
Votes

High School Football and Other School Sports Start Soon, Masks and All

Winter tryouts and practices in snow are not the only change this year. 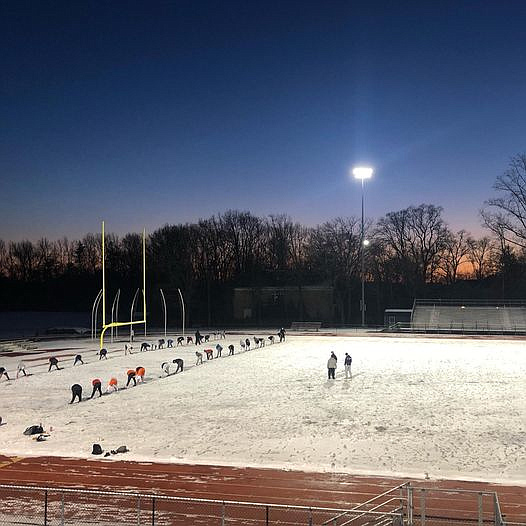 With high school football starting in February instead of September, the players might see snow on the gridiron.

High school sports is forging ahead this year in Fairfax County, with the football season geared up to start in February, for a shortened season, but at least the players are getting a chance to compete despite the disruptive year due to the pandemic. It’s cold, it gets dark during practice and the snow threat lingers this February, but football players are tough, like Leland Cabus who likes the cold. “You get used to harsher environments,” the West Springfield Spartan said. Fellow Spartan Aaron Fields is looking at the future and maybe a scholarship. “I’ve been waiting for the season

Everyone is looking for a little normalcy during the pandemic, and around the schools the students and families are hopeful. With football on the school field, at least it brings on a sense that things may get back to normal.

“This is an opportunity,” said Bill Curran, the FCPS athletic director. “They’ll play within their respective regions, they don’t need to go far,” Curran added.

That’s fine with Andrea Edelstein, a Lake Braddock Secondary School parent whose son is trying out for the freshman team this year. “The coaches, athletic trainers, and our Director of Student Activities have been amazing and put protocols into place that have allowed student athletes to do conditioning in a safe way,” Edelstein said. The LBSS football program has been the highlight of the past year for the Edelsteins. “The ability to remain connected to the school through sports during the virtual first half of the academic year has helped to keep my son motivated,” she said.

At Lake Braddock, the football team practices with snow on the ground this year.

In a school year that’s left many things out due to the covid requirements, school officials are working with everyone and watching the recommendations from the Centers for Disease Control (CDC) to avoid catching or spreading the virus. That includes fans in the stands watching the athletes. For the NFL’s Super Bowl, they allowed some fans to attend, but have a “Playbook,” set up for dealing with the Covid-19 possibilities, and the playbook addresses the same things that have been recommended all along – social distancing, face coverings and hygiene. On the school field, the masks are part of the equipment too, and Zach Lesser from West Springfield, noted the special football masks they have. “It’s Velcro, attached to the helmet,” he said.

The school system is keeping an eye on Governor Northam and the recommendations from that office. In the week before the first football game, the FCPS is looking at allowing two family members per player. “We want to give the families an opportunity to see their child,” said Curran.

In the past, most of the high school games across the county did not see full stadiums anyways, and with the chill of February, it may be less. “We can easily social distance,” Curran said.