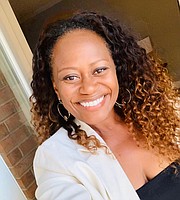 As a black female the question I am often asked is, “When did you know you were a Republican”? Think about that for a minute. There is a subtle admission baked into that question — for most Blacks in this country, from the moment you are born, you are presumed to be a Christian and a Democrat. My deviation was a result of my own introspection of my own experiences, education and world view.

Without putting in this work we are susceptible to “falling in line” to what we’ve come to know as normal, accepted, political behavior. Unfortunately for a Black person “falling in line” is often a subconscious decision that is fostered throughout your childhood. But for those who consciously have a different political voice, those views are put on blast to immediately expose the defector and then move to squelch that voice through tools such as shaming, guilt, discrediting and isolation. I came to realize this isn’t done haphazardly but through social forces that is sometimes referred to as “racialized social constraint.”

As a child growing up in the church, I could never understand how on any given Sunday, God’s Word was preached. Yet, at election time, black churches across this country would invite politicians to speak even when their political policies ran counter to the values and principles of God’s teachings. I’m not pointing fingers. I have the utmost respect for many of the men and women in my home church who cultivated and supported my growth. But I was way too young and underdeveloped to understand the complicated dichotomy that still exists between Black Christians and the Democratic Party.

But one has to wonder what compels 86 to 90 percent of us to remain under the Democratic Party’s umbrella. Despite overall diversification on political issues and a steady uptick in the number of Blacks in the middle and upper classes, we have somehow remained loyal to the Party. For all of our protesting to the contrary, we are a monolith. And if we’re being honest, the goal of the monolith is to keep the conservative voice out.

One problem with the monolith is that it excludes more people than it lets in. I have often wondered how further along would we be as a community if Black conservatives were given the same microphone as the liberals. If we had listened to the economists rather than the race hustlers. Would we, in 2021, still find it necessary to bring back Affirmative Action and other race preference bills if we had listened to people like Ward Connerly, a Republican who was appointed to the Board of Regents at the University of California. Connerly made a strong case to end Affirmative Action on the grounds that it discriminated against other groups of people and indirectly harmed blacks in the process. Rather than excoriate him for insisting that we stay true to non-discriminatory policies, might we have reimagined our school system years ago and put the financial investment in on the front end so that we would have little need for these programs on the back end?

The tragedy is that we’ll never know and if a new generation of thinkers continue canceling out the voices that they do not agree with, we will continue to see greater dependency on the government and a deterioration of family and church.

This year my younger son turned 18 and decided not to vote in the 2020 election. His reason was simple. He hadn't taken the time to decide on the issues. I couldn’t argue with that; in fact I was proud that he understood the gravity of his vote. To be honest, I have no idea who he would have voted for. I do know what he's about and who he is shaping up to be. He drops clues here and there like this one. A few months ago a reporter mentioned that a university thought that due to the pandemic, it would be good policy to allow Black students to return before the other groups of students. My son had just walked by and caught the story. With disgust in his voice he said, “Why? That’s stupid.” I didn't let him know it but, inside I lit up like a lightbulb.

The question is not, “When did I know I was a Republican?” The question should be, “Why.” The Republican Party aligns with who I am and I don’t feel that I have to deny any part of myself to align with its platform. My decision is both personal and political.